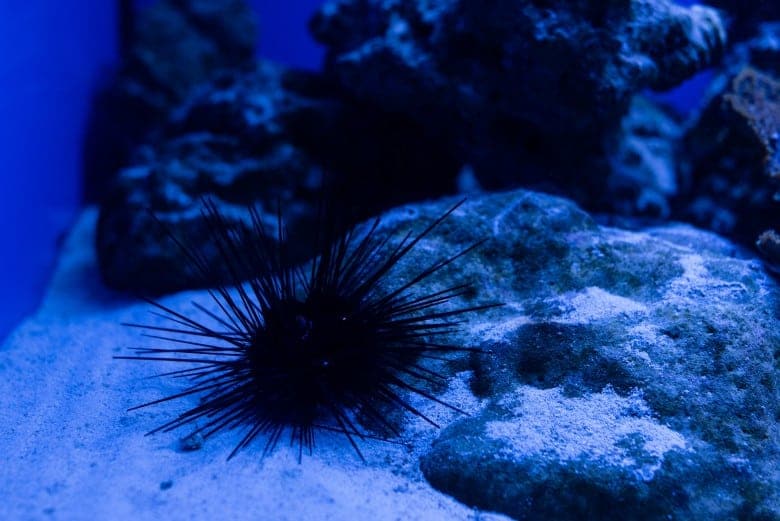 In this article, you will learn about 5 amazing algae eaters for saltwater aquariums. 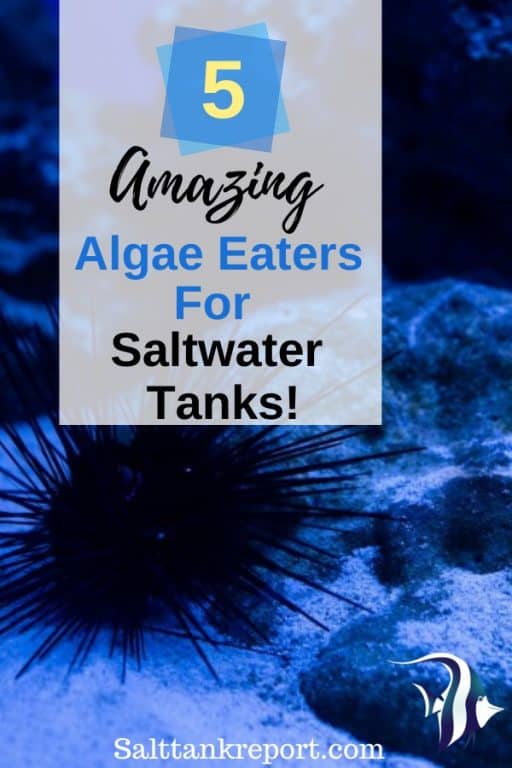 One of the most frustrating aspects of keeping saltwater tanks is dealing with nuisance algae. Keeping algae under control can be a handful and if you don’t know how to prevent it and take action right away, it can be a disaster.

An important fact about nuisance algae is that algae eaters are not going to be the cure or prevent it from happening.

Algae eaters like invertebrates will only help control it. In order to rid your system from it, you need to find the reason why it is happening in the first place.

Most times nuisance algae is the result of excess nutrients in your tank. Also if your tank is new, it will go through different stages of algae outbreaks and will need time to mature.

Having a large cleanup crew will go along way in controlling algae in your tank.

For aquarists who are looking to add in effective algae eaters for saltwater tanks but are also interested in colorful or fascinating creatures, tuxedo urchins are often an excellent choice. These nocturnal urchins hideaway in plants or rocks during the day, but at night they emerge to feast on all types of algae, including some particularly annoying varieties such as hair algae.

Tuxedo urchins have bands of color, ranging from blue to black to red, between each band of spines, which give them their name and an elegant, attractive appearance. These urchins are peaceful and easy to care for. Several can be housed together, provided each has enough hiding space during the day, and enough food at night.

The urchins, which grow to about three inches, prefer a water temperature between 72 and 78 degrees Fahrenheit and a pH between 8.1 and 8.4.

Tuxedo urchins are excellent all-around algae eaters and can be quite voracious. This means, however, that they will also happily eat beneficial coralline algae, which many aquarists want in their aquariums. In order to ensure that the tuxedo urchins have enough food and that they don’t entirely deplete the coralline algae population, it’s best to only introduce them to a mature aquarium with healthy coralline algae growth.

The urchin’s diet can also be supplemented with algae sheets or dried seaweed if the algae level in the aquarium runs low. 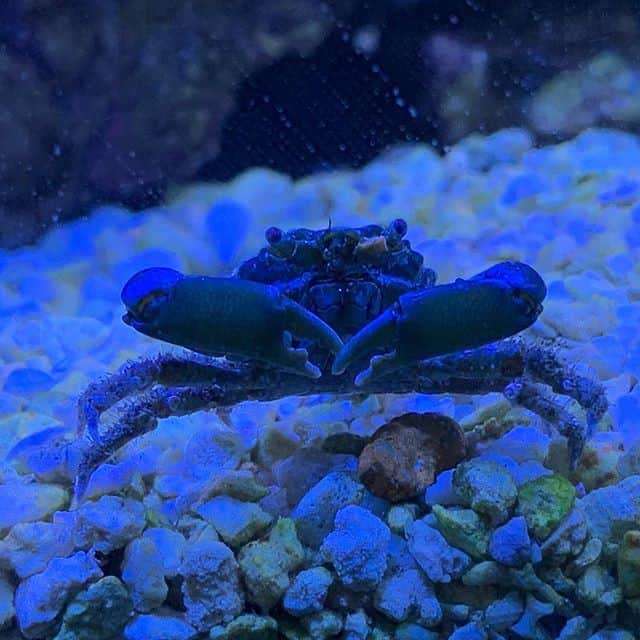 Another of the best algae eaters, and a striking addition to the home aquarium, is the green emerald crab. As their name suggests, these crabs, which only grow to about one and a half to two and a half inches across, are a bright or olive green color. They enjoy a varied diet of algae and will help to keep aquariums cleaner overall.

These little crabs prefer a pH level between 8.1 and 8.4 and a water temperature between 70 and 80 degrees Fahrenheit. Although they are considered to be quite hardy and will often live for several years, they do not tolerate fluctuating water parameters well.

Green emerald crabs are generally peaceful, but they may fight with other crabs if they have not been provided with enough space. Each crab will need about twenty gallons to itself. In addition, these crabs will sometimes become aggressive towards other crab varieties, and they may consider small fish or snails to be food.

Green emerald crabs may also nip at some coral polyps, although they are generally considered to be reef safe. When offered enough food, the risk to corals, fish, and snails decreases.

Green emerald crabs will eat most kinds of algae, but they are most well-known for enjoying bubble algae, which lives on live rock and can be incredibly invasive and difficult to remove. Like the tuxedo urchin, however, these crabs will also often munch on coralline algae.

In order to protect the coralline algae population, as well as any small snails in the aquarium, aquarists may need to supplement the crab’s diet with chopped shrimp, fish pellets, or dried seaweed. 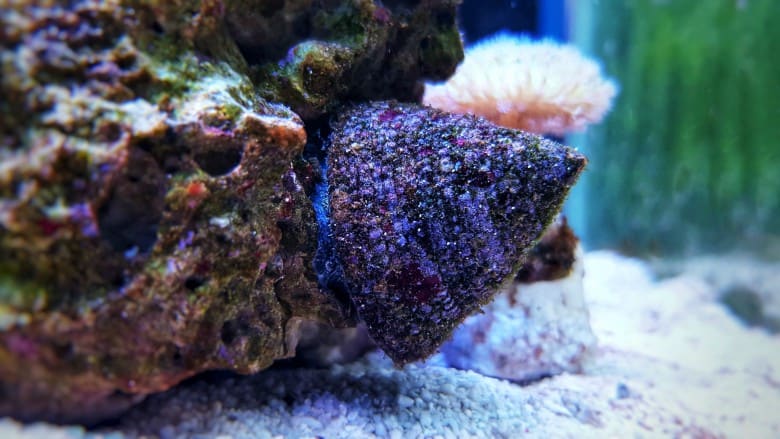 Although their appearance doesn’t make them the most visually exciting of reef tank invertebrates, the Mexican turbo snail is by far one of the best algae eaters, and an excellent addition to most aquariums. Turbo snails are peaceful aquarium inhabitants and are incredibly easy to care for.

These snails prefer water temperatures between 72 and 78 degrees Fahrenheit. Temperatures at the lower end of that spectrum are ideal. The pH should be between 8.1 and 8.4.

Turbo snails are unobtrusive creatures that enjoy crawling along glass or rock, grazing on all types of algae, including micro-algae and hair algae. Mexican turbo snails are also known for eating Cyanobacteria.

They can consume large amounts of algae each day, so they keep tanks very clean. Mexican turbo snails can also get into crevices to search for algae and will often seek out quiet hiding places. Some larger fish may nip at turbo snails, so it’s important to keep them only with peaceful tank mates.

Mexican turbo snails only grow to about two inches, but when they are on the hunt for food, they will often dislodge rocks structures or coral. When keeping these snails, it’s important to secure rocks and make sure that corals are firmly in place so that the snails don’t cause any damage.

Like Mexican turbo snails, margarita snails are peaceful and very easy to care for. They are also capable of consuming large amounts of algae, including hair algae. These snails, which grow to about an inch in size, have rounded, dark-colored shells and brown bodies.

They get along well with most peaceful tank mates, but they should not be housed with aggressive fish or invertebrates, as they are small and easily attacked or eaten.

Margarita snails prefer cooler water temperatures, close to 72 degrees Fahrenheit. However, they can live comfortably in water up to 78 degrees Fahrenheit. The snails are quite hardy once they have acclimated to the aquarium, but they can be very sensitive to any changes in water parameters. Nitrate spikes in particular can cause stress and health issues.

Because margarita snails are capable of consuming so much algae, it’s important to only introduce them to established aquariums. If the algae levels become too low, the snail’s diet can be supplemented with dried seaweed. In addition, it’s a good idea to add calcium supplements to the aquarium in order to encourage healthy shell growth. 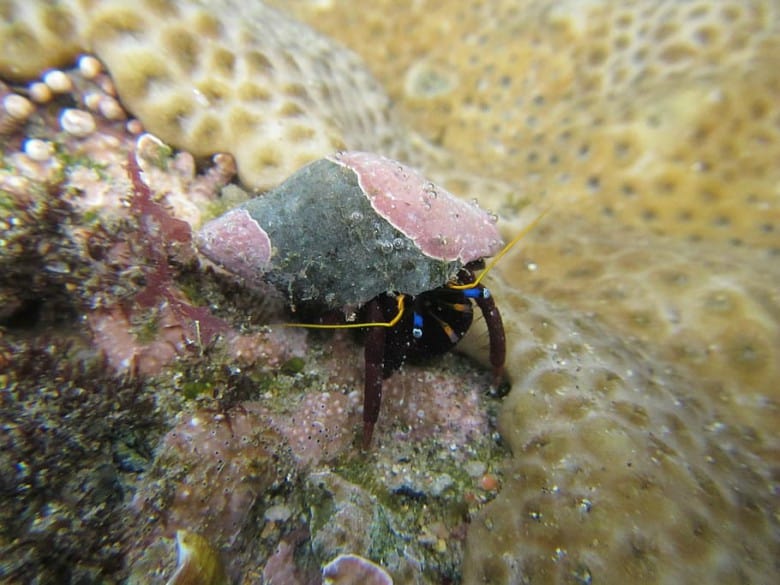 Hermit crabs are a popular choice when it comes to algae eaters for saltwater tanks as there are many varieties to choose from, and these scavenging reef tank invertebrates help to keep aquariums clean in a number of ways. Hermit crabs will happily eat excess fish food and many different types of algae.

In addition, different varieties of hermit crabs will focus on cleaning different areas of the aquarium.

One of the most popular algae eating hermit crabs is the blue legged hermit crab. This species is not only an excellent tank cleaner but is also brightly colored, making it an attractive aquarium addition. However, it can sometimes be aggressive towards snails, particularly if it’s looking for a shell.

The red-legged hermit crab, on the other hand, is known to be more peaceful. It also rapidly consumes algae, and will readily eat red slime algae.

Small hermit crabs, such as the dwarf zebra hermit crab, are ideal for reaching into tiny crevices in search of algae. On the other hand, crabs such as the blue-eyed hermit crab spend their time searching for algae and debris by stirring up the top of the substrate. Aside from helping to thoroughly rid the aquarium of pesky algae, this behavior also helps to aerate the sand.

For a hermit crab that will eat a wide variety of algae, the scarlet hermit crab and electric orange hermit crab are excellent options. These attractive crabs, named for their brightly colored bodies, will readily eat hair algae and are also known to eat Cyanobacteria, which can cause red, brown, blue, or green slime in the aquarium.

When selecting a hermit crab species, it’s important to choose reef-safe varieties. This generally means picking hermit crabs that remain relatively small, growing to only about two inches, so that they won’t damage corals with their heavy shells or rearrange rocks or coral formations.