Not all fish types are suitable for a brackish water tank. It’s important to research these fish ahead of time to ensure you stock your tank properly.

This article will show you 7 amazing brackish water aquarium fish that you should consider. 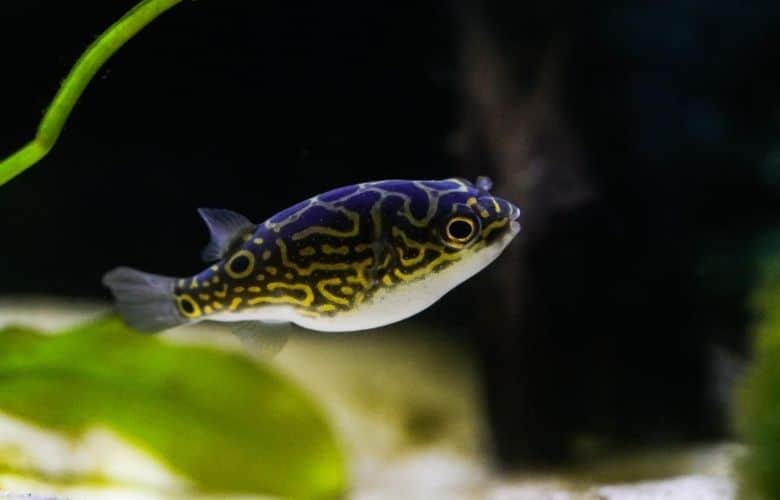 The figure 8 puffer, also known as the eyespot pufferfish, is not only one of the most vibrantly colored puffers available but is also friendly and a good choice for aquarists who have never kept pufferfish before.

Figure 8 puffers grow to only about three inches in length, so they require a tank of 30 gallons or larger. The coloring of the fish can range from brown to green with black and yellow spots that give the fish its name.

Figure 8 puffers, despite their cute appearance, can be aggressive. They should not be housed with other pufferfish and, if kept in a community aquarium, should be given plenty of space with few tankmates. These puffers prefer brackish water with a pH between 7.8 and 8.4 and a temperature between 72 and 82 degrees Fahrenheit.

As carnivorous fish, figure 8 puffers should be offered a diet of fresh or frozen foods such as shrimp, clams, or crickets. 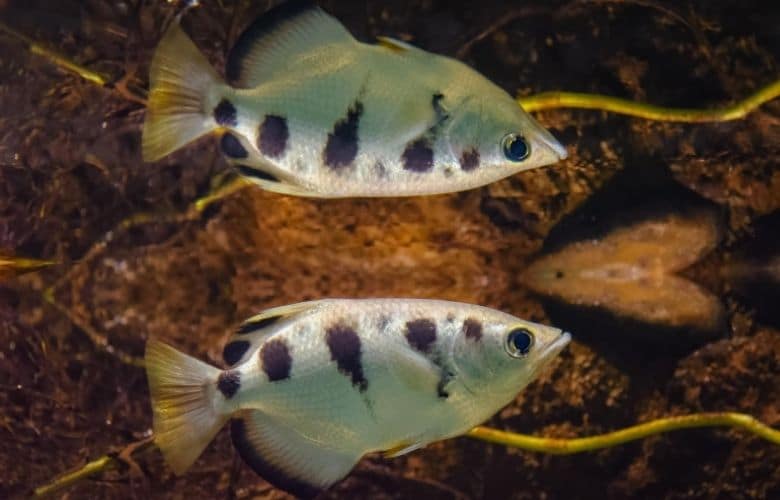 Archer fish are perhaps some of the most fascinating fish available to aquarium keepers. These fish, which are native to mangroves, use a jet of water to shoot insects into the water in order to feed on them. This behavior can be mimicked in captivity by creating an aquarium that also features a land area with plants, on which insects such as crickets can thrive.

Archers prefer to hunt naturally, but they can also be offered other meaty foods such as shrimp or mealworms in order to supplement their diet.

Because archers grow to between 10 and 12 inches in length and should be kept in groups of five to six, they require an aquarium of at least 100 gallons. The water temperature should be between 72 and 82 degrees Fahrenheit with a pH between 7.8 and 8.4. Adding live plants and rocks will offer plenty of hiding places for the archers and will also create a more natural environment. 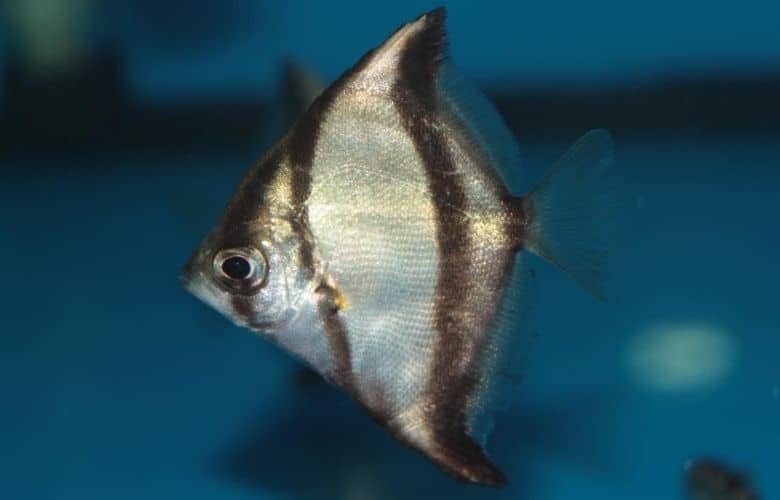 Mono Sebaes are a large, arrow-shaped fish with black and silver banding. Because these fish can grow to 12 inches long and 24 inches tall, they’ll require a tank of at least 125 gallons. The water temperature should range between 75 and 82 degrees Fahrenheit with a pH level between 7.8 and 8.4. Mono Sebaes prefer a well-planted aquarium with dim lighting. As juveniles, the water can be nearly fresh, but as they age, they prefer more salinity.

Mono Sebaes are generally considered to be peaceful fish and often get along well with other brackish species such as gobies or other Mono varieties. These fish are omnivorous and can be offered a mix of peas, seaweed, lettuce, Spirulina, brine shrimp, and flake or pellet foods. 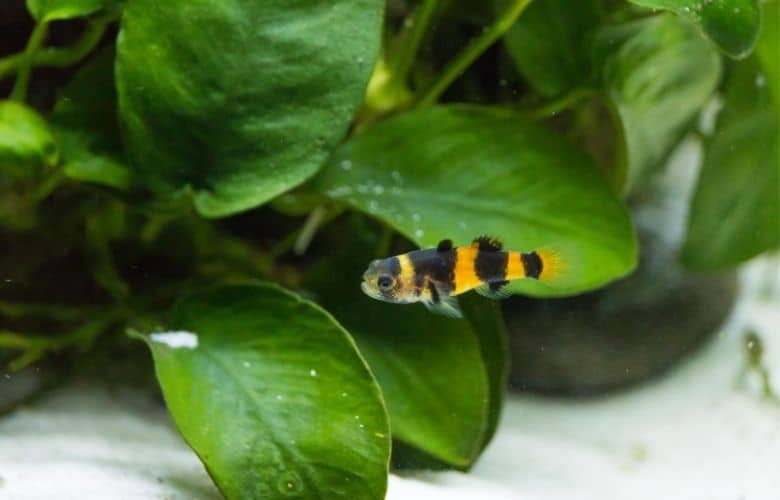 Like its namesake, the bumblebee goby features a distinctive black and yellow banding along its body. These fish are also quite small, growing to only about one and a half inches, so an aquarium of 10 gallons is adequate, although more space should be offered if more fish are being kept together.

Bumblebee gobies are peaceful and do well when kept in groups or in community tanks with other peaceful fish. The aquarium should also feature plants, rocks, or driftwood in order to provide ample hiding places. These fish also prefer a sand substrate through which they can dig.

Bumblebee gobies are carnivorous and tend to prefer live or frozen foods. Bloodworms, brine shrimp, or daphnia are all good food choices for these fish. 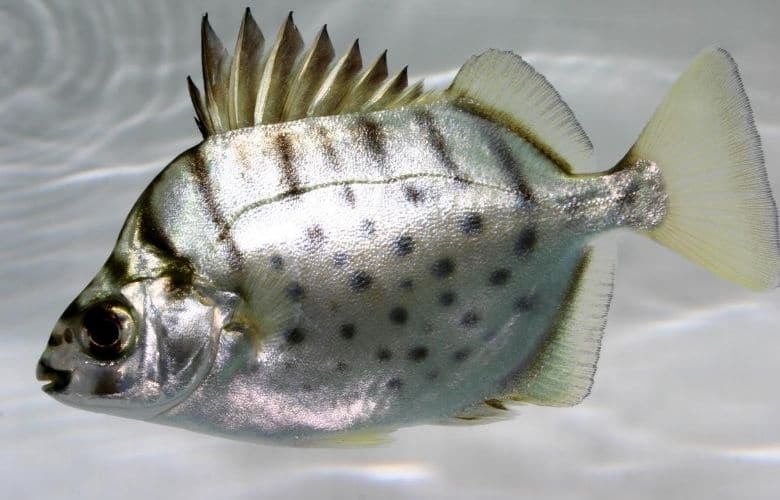 Silver scats are energetic, robust fish with silver bodies and black stripes and spots. Although these fish are quite active, they are also generally peaceful and work well in community tanks of other brackish fish. They also get along well with their own kind and can be kept either singly or in groups of three. However, silver scats can grow to be 15 or 16 inches in length, meaning that an aquarium of at least 150 gallons will eventually need to be provided. Silver scats prefer a pH between 7.8 and 8.4 and a temperature between 70 and 80 degrees Fahrenheit.

Silver scats are voracious and will thrive on frequent feedings of shrimp, earthworms, shellfish, small feeder fish, peas, lettuce, or seaweed. Scats can sometimes become aggressive during feedings, so it’s important to provide plenty of food in order to avoid bullying. 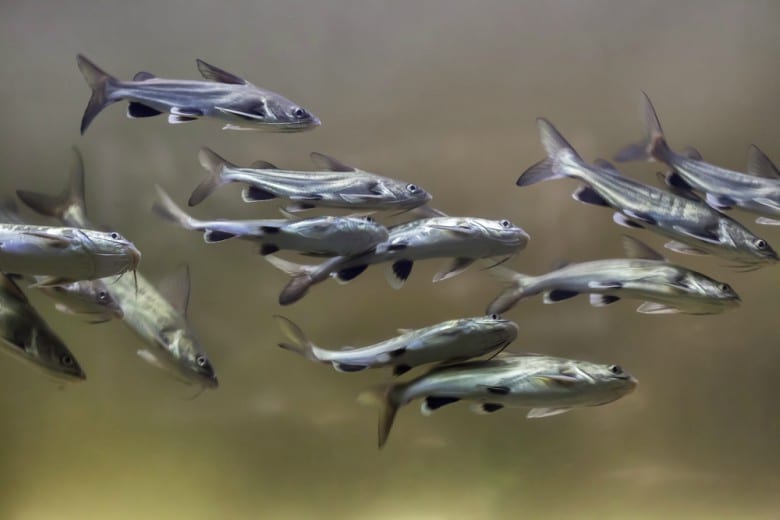 Columbian shark catfish, also known as sea catfish, begin life as freshwater fish but grow to prefer brackish water as they mature. Once it becomes an adult, this fish will prefer a nearly entirely saltwater tank. These fish, which have silver and black markings, long bodies, and angular fins, giving them their ‘shark’ nickname, can also grow up to 20 inches in length.

Because of their large size and high energy level, Columbian shark catfish require a tank of at least 75 gallons, and more space will need to be provided when housing fish together. These fish are considered to be quite peaceful, but as they grow, they may see smaller fish as food, so it’s important to choose larger fish as tankmates. Shark catfish prefer a water temperature between 74 and 80 degrees Fahrenheit with a pH between 7.8 and 8.4. They are omnivorous and can be offered a variety of foods including algae, sinking pellets, or bloodworms. 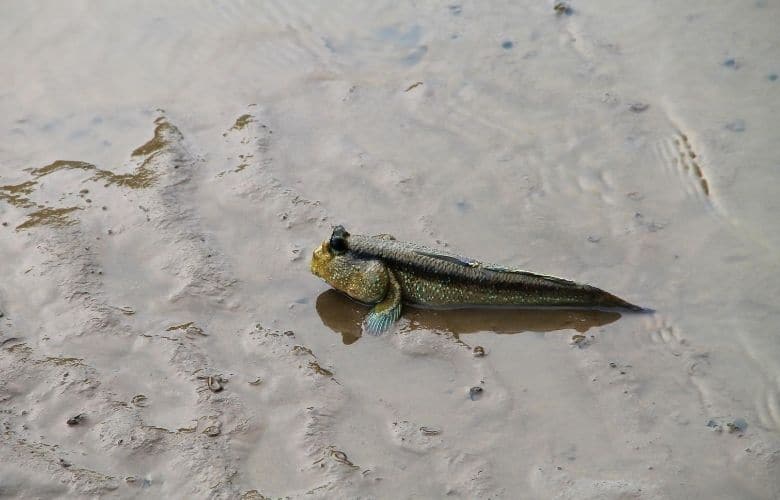 Mudskippers are some of the most intriguing and entertaining brackish fish available, as they enjoy spending time both in the water and on land. There are several varieties available, and they range in size from four to 10 inches. Smaller mudskipper species, such as the dwarf mudskipper, need an aquarium of 30 gallons, while larger species will require 55 gallons or more. A swimming area as well as easy access to a beach area will need to be provided.

Mudskippers, particularly males, can become quite territorial, so ample space and hiding places must be offered in a community tank. The water temperature should be between 72 and 80 degrees Fahrenheit, and the pH should rest between 7.8 and 8.4. A balanced diet of brine shrimp, small crickets, small clam or fish pieces, and algae pellets will help mudskippers thrive.