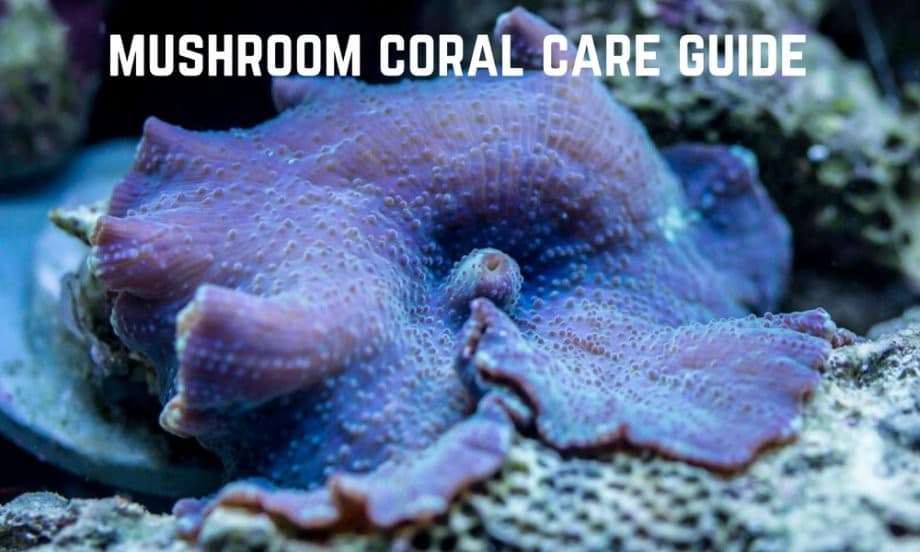 If you are new to the world of Corals, Mushrooms Corals could be the perfect choice for you. Because these Corals are so versatile, they are often considered good beginner Corals. These corals are not overly picky, and can still maintain good health in less than ideal water conditions. In other words, they are quite forgiving. But what exactly does it require to keep a Mushroom Coral in good health? This mushroom coral care guide will look at a number of factors relating to mushrooms including required feeding, lighting, positioning, and more.

A little About Mushroom Corals

Mushroom Corals make a beautiful addition to any tank, not only because they are extremely versatile, but also because they are very colorful. Mushroom Corals come in a variety of different colors including red, pink, green, and blue. While some are solid colors, others can be striped or dotted. This type of Coral grows to be between 1 inch and 1 foot in diameter, though most in captivity extend to about three inches.

On the outside, Mushroom Corals also referred to as Corallimorps, bear a striking resemblance to sea anemones. On the inside, however, they bear more of a resemblance to Stony Corals. Unlike many Corals, Mushrooms do not have feeding or predatory tentacles.

Mushroom Corals can be found in oceans around the world. While most of them like tropical waters, there are also some other species that can live in cold waters. They prefer waters where the quality is poor, and are often found colonizing in dead reefs where a natural disaster or man-made pollution has taken place. The Mushroom Coral is commonly found in shallow, brightly lit waters, but some can also be found in the deep.

If your tank is healthy, you won’t need to do anything in regards to manually feeding your coral. These corals are considered filter feeders and will be happy to feed off of algae, phytoplankton, and waste particles. If you have a larger mushroom coral, you can also feed it minced meats like brine shrimp – this can be a great supplement to your Corals regular meals.

Always be sure that you don’t over supplement your waters, as some nutrients like nitrates and phosphates can damage your Mushroom corals.

Lighting for your Mushroom Corals

As we said earlier, Mushroom Corals can be a very forgiving species of Coral. In the wild, Mushrooms are usually found in shallow, well-lit areas, but they can also be found in the deep dark waters. The exact lighting required for your Coral will depend on the species that you have. Like in nature, when in tanks, some Mushrooms prefer lower or indirect lighting, while others will thrive in intense lighting. Luckily, Mushroom Coral can be very forgiving in terms of lighting, so if you don’t get it exactly right the first time, they should still remain quite healthy.

If you want to enhance the coloring of your Mushroom Coral you can add Actinic lighting to your aquarium, but those species that are found in deeper waters may not tolerate them well.

Water flow for your Mushroom Corals

Again, Mushroom Corals aren’t too picky when it comes to water flow, so don’t panic if you don’t get it exactly right the first time. Having said that, the ideal environment for the Mushroom Coral would be within a low to moderate and indirect water flow. Too much water movement is unlikely to cause too much harm to the Mushroom coral but can cause them to fully expand, which could put nearby corals and invertebrates at risk of aggression.

Tank Positioning for your Mushroom Corals

Once again, Mushroom corals are quite forgiving when it comes to tank placement. With that being said, most mushrooms prefer to be placed towards the middle or bottom of the tank so that they get proper lighting. When placed on live rock or rubble, Mushroom corals will attach themselves there. Because Mushroom Corals do not like strong water flow, they should never be placed near powerheads or other sources of direct water movement.

Allow your new Mushroom Corals a few days to adapt to your tank, and then monitor their behavior. If they expand in cap size, they are happy with their placement within the tank. If they don’t, you may want to consider repositioning them.

Mushroom Corals thrive when salinity levels are between 1.025 and 1.027, and water temperatures are stable between 77-79 degrees F. For long term health, nitrates should be kept below 5ppm, and phosphates below 0.05 ppm. Alkalinity, Magnesium, pH, and Calcium levels should all be balanced with one another.

When it comes to the growth rate of Mushroom Corals, it can vary greatly depending on which species you are dealing with, as well as the environment in which it is living. Some mushroom corals will expand slowly, while others will rapidly try to take over your tank.

If you are looking for a fast-growing mushroom, you should consider Discosma mushrooms. These mushrooms come in fascinating colors and have a thinner smooth disk.

To promote mushroom coral growth, place them on a large rock, and be sure to monitor feeding.

If you are unsure as to whether you are purchasing a fast or slow-growing mushroom, consult a local aquarist.

Mushroom corals are labeled as semi-aggressive but generally do well with a variety of different invertebrates and fish. With that being said, Mushrooms should never be paired with tank mates that nibble on corals like triggerfish, urchins, or puffers.

Mushroom Corals don’t move around, so they aren’t a threat to corals placed in other areas of the tank. Having said that, they can be a danger to corals and invertebrates that are within a close distance. Smaller mushroom corals will not eat corals or invertebrates but can emit chemicals that can cause other species to shrink, starve themselves, or even die. Always be sure to keep an eye on the growth of your Mushroom coral to ensure that it doesn’t encroach on neighboring corals. With that being said, mushroom corals will tolerate their own species and are safe to be in close distance to them.

If you are considering a beginner coral, the Mushroom coral is very forgiving and is a great candidate. Mushroom corals can live in a variety of lighting and flow conditions and don’t require a lot in the way of feeding or care. If your mushrooms seem stressed out, there is a good chance that your tank water parameters may be way off. I suggest checking all levels, and ensure no other livestock is bothering it.