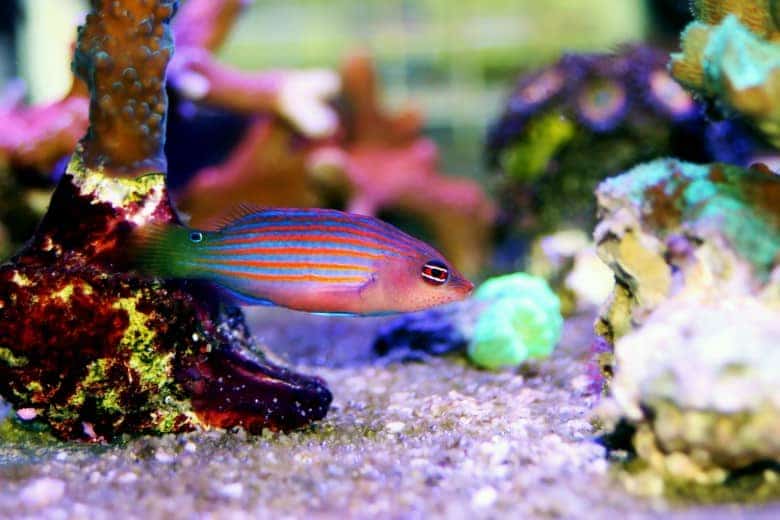 In this article, you will learn how to care for the Six-line wrasse.

Six line wrasses are one of the most sought-after saltwater aquarium fish thanks to their brilliant colors, ease of care, energetic personalities, and the fact that they are reef safe. In addition, these fish will often eat pests such as bristle worms or pyramidellid snails, making them a welcome addition to the aquarium. 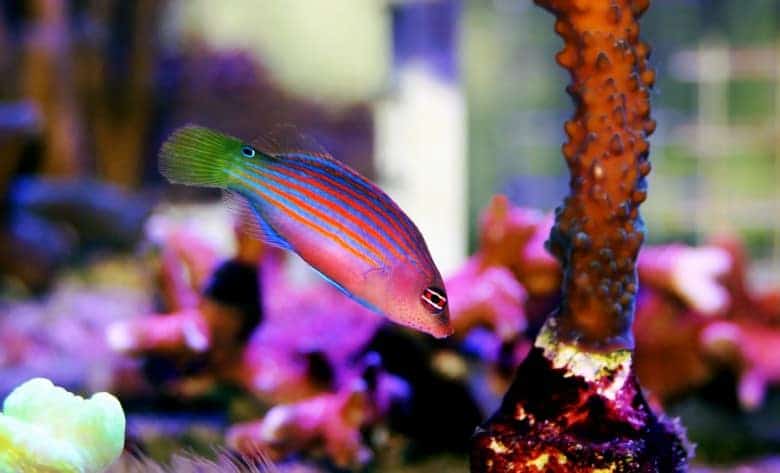 Six line wrasses have blue bodies with, as their name suggests, six orange stripes running horizontally from head to tail. The fish’s heads are also an orange or reddish color, while the tails are bright green and feature a dark false eyespot. Generally, six-line wrasses grow to about three inches long.

Six line wrasses are energetic fish and enjoy darting around the aquarium or swimming in and out of plants or rock structures. 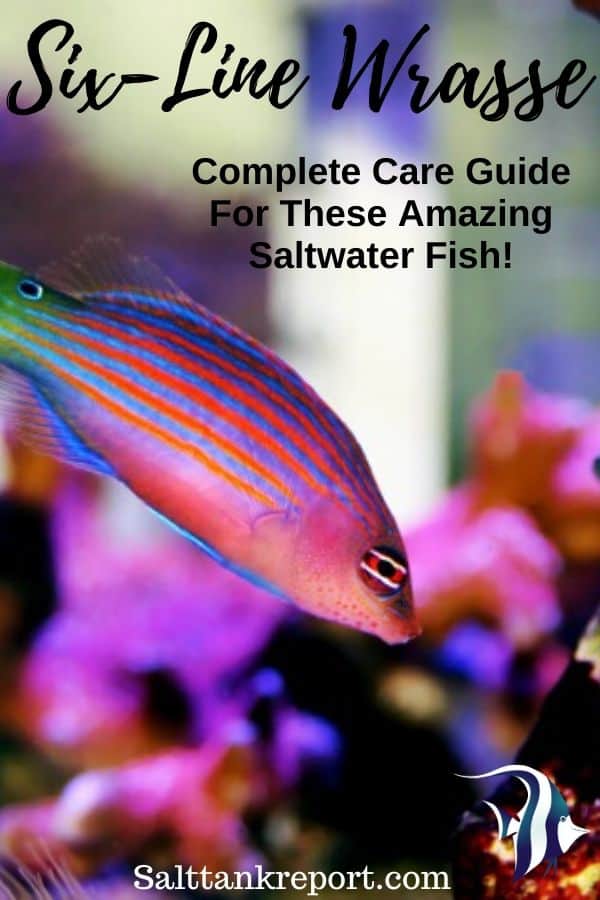 These fish are considered to be reef safe, as they don’t generally nip at corals. They also tend to stay away from most beneficial invertebrates. However, when it comes to other fish, six-line wrasses can be semi-aggressive.

They will often start fights with other fish, particularly with other wrasses or with fish that are similar in shape or color. Six line wrasses can still be an excellent part of the community aquarium, but in order to maintain peace, it’s best to introduce them to the aquarium after all the other fish have already been added.

When choosing tank mates for six line wrasses, it’s best to choose bold but largely peaceful fish that can stand up to the wrasse’s occasional bullying but won’t bully the fish in return. Six line wrasses can also be kept in small groups, but it’s best to keep them singly unless the aquarium is quite large.

Six line wrasse care is relatively easy, and these fish aren’t too picky when it comes to aquarium décor. They do well in a variety of settings, as long as there are plenty of caves and crevices for them to hide in. These hiding places help to lower stress, which can in turn reduce aggression. Building secure caves by using live rock is an excellent choice, as the wrasses will often pick at the rock, sometimes eating the small parasites that live there.

Because they are so small, these wrasses can be kept in aquariums as small as 20 gallons, although a larger tank is often a better option. As more fish are added, however, it’s important to offer more space so as not to incite aggression.

These fish are originally from the Maldives, Fiji, and Kenya, and prefer a water temperature that’s between 72 and 78 degrees Fahrenheit. A pH between 8.1 and 8.4 and a specific gravity resting between 1.020 and 1.025 are ideal.

Six line wrasses will occasionally find their own meals by snacking on pests, but these active fish will also need to be fed frequently. Most aquarists recommend feeding the wrasse two or three times a day. These carnivorous fish can be offered a variety of meat-based foods, including pellets, flakes, Mysis shrimp, or brine shrimp.

Occasionally, six-line wrasse owners may notice that the colors of their fish have become more vibrant. This is an indication that the fish are ready to spawn, and the color change is most noticeable in males. Unfortunately, these fish breed by releasing eggs and sperm into the water column. In the home aquarium, this makes fertilization and egg hatching nearly impossible. Six line wrasses available for purchase are first caught in the wild.

Six line wrasses aren’t prone to any particular illness or diseases. However, they are easily stressed when moved from place to place, so acclimating these fish carefully is one of the most important elements of six line wrasse care. New six-line wrasses should be kept in a separate quarantine aquarium for several weeks so they can be monitored for signs of disease before they’re moved to a community tank. This also helps the wrasses destress in a calm environment.

Six line wrasses are considered to be relatively inexpensive saltwater fish. The price ranges from about $25 to $40. Larger, more mature fish are often more expensive.

Should You Add a Six Line Wrasse to Your Aquarium?

If an aquarist is looking for a colorful, energetic, and entertaining fish, the six-line wrasse is often an excellent choice. These fish don’t require large aquariums, and they’re reef safe, so aquarium keepers won’t have to worry about them harming corals or beneficial invertebrates. In addition, they can often help to clean up pest invertebrates, keeping the aquarium healthier overall.

Aquarium keepers who are considering six-line wrasses should remember that these fish can sometimes be somewhat aggressive. They should be given plenty of space, especially when they are housed with other six-line wrasses, and they should always be introduced to the community aquarium after all the other fish. When housed with other bold but peaceful fish and given plenty of hiding places to swim through, these bright, fun fish are easy to care for and can live for more than five years, making them the perfect addition to many tanks.