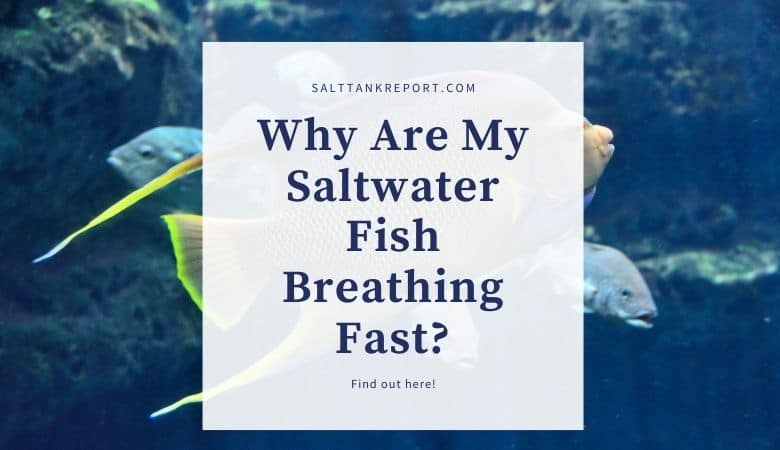 Aquarium keepers know that the best way to ensure fish stay healthy is by observing them and looking for any changes in appearance or behavior.

However, when a change does occur, it can be difficult to determine what’s causing it, particularly if the change is something like a saltwater fish breathing heavy.

Fish breathing rapidly can be caused by several factors including stress, parasites, or high ammonia levels.

Fortunately, a bit more observation can usually tell aquarists what’s causing the change in their fish.

How Do You Know If Your Fish is Struggling to Breathe?

Sometimes, even determining whether a fish is breathing heavily to begin with can be a challenge.

A fish that’s struggling to catch its breath may appear lethargic or may not move around the aquarium as quickly or as much as it once did.

The fish might float near the surface of the water, or it might sink to rest at the bottom of the tank.

Looking at the gills of a fish breathing rapidly is also a good way to determine what might be going on. Fish that are out of breath usually flutter their gills much more quickly than normal.

The gills might also be covered in mucus or may appear inflamed.

Fish that are not getting enough oxygen may also lose their appetite. Observing the fish carefully to see whether it eats can give some clues about the fish’s health.

Aquarium keepers may also want to take note of whether the fish is gasping to breathe all the time or if it only happens now and then.

Read: How to acclimate saltwater fish

Why is My Fish Breathing Quickly at the Bottom of the Tank?

A saltwater fish breathing heavy and staying near the bottom of the tank usually points to exhaustion in the fish.

Often, particularly in crowded tanks, fish can become aggressive, and some fish might get chased around, which can cause a fish to stop and take a breather at a safe spot on the bottom.

Sometimes some corals or anemones will also reach out and sting fish, which can cause the injured fish to drift to the bottom. The sting can also cause the fish to gasp rapidly.

If there’s a bully in the aquarium, keepers may need to separate some of the fish into different tanks.

Fish that are lying at the bottom of the tank may also be suffering from parasites. Different types of parasites can attack the delicate gills of saltwater fish.

The fish’s body attempts to protect the gills by forming a thick coating of mucus. Unfortunately, this mucus layer also inhibits the fish’s breathing.

If the fish has any white or brown spots on its body, particularly near the gills, or has any other color changes, it can be a sign that the fish has parasites.

Fish that have parasites also tend to rub up against rocks or other aquarium decorations to relieve the itch or pain the parasites are causing.

Researching the fish’s specific symptoms can give aquarium keepers a good idea about what type of parasite the fish has, and the fish can then be moved to a quarantine aquarium and treated with a medication designed to get rid of that particular parasite.

Why is My Fish Breathing Quickly at the Top of the Tank?

Fish that are breathing quickly at the top of the tank usually aren’t getting enough oxygen from the water itself, so they’re sipping oxygen from the air at the surface.

A lack of oxygen in the aquarium water can be caused by something as simple as a filter or aeration system that isn’t powerful enough.

If the water in the aquarium is quite calm and there’s little agitation, aquarium keepers may need to invest in better aeration.

Adjusting the flow of the filter can also help to pull oxygen into the water.

Fish may also breathe rapidly and swim to the top of the tank when the ammonia level is too high.

If the tank hasn’t been properly cycled or there are too many fish for the cycle to keep up with, ammonia levels can spike.

These levels are quite toxic to fish. Ammonia can burn a fish’s gills and can make it difficult for the fish to take in enough oxygen.

Aquarium keepers can check the chemical levels of the water by using an aquarium test kit. If the ammonia level is too high, a partial water change can be performed until the level drops back down.

If the tank is overstocked, some of the fish may need to be removed to prevent another spike. The addition of more filtration, live rock, reduced bioload can aid in keeping ammonia in check.

In addition, frequent maintenance tasks and water changes help to reduce waste can lower the risk of ammonia spikes.

Why is My Fish Breathing Quickly After a Water Change? 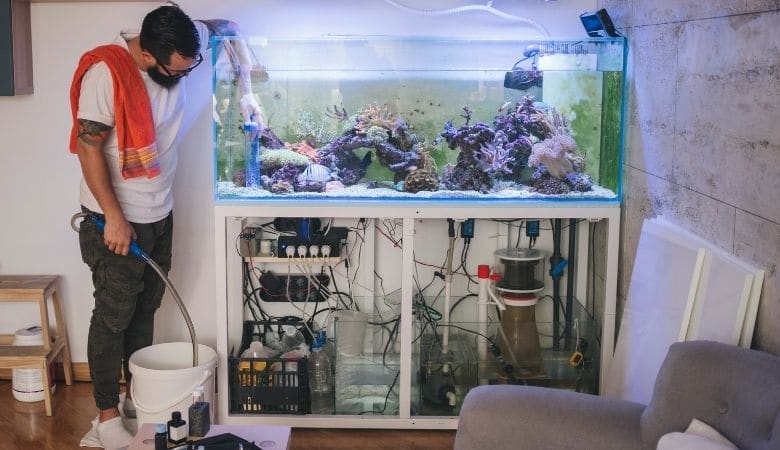 There are a few reasons that a fish might breathe quickly after a water change. A large water change can stress fish, which may cause a burst of energy.

This stress can lead to a bout of fast breathing. In addition, the newly added water may not be as oxygenated as the water that was in the aquarium previously.

Adjusting the powerheads or wavemakers in the tank can help to quickly add more oxygen to the water.

New water that’s added to the aquarium may also contain a higher level of chlorine and other chemicals. This can cause a fish to breathe rapidly, as it can make it difficult for the fish to take in oxygen.

Of course, using only RODI water for your saltwater tank will eliminate these chemicals.

Test kits can help you determine all the necessary water parameters to ensure everything is within limits. You can test the water before and after water changes if you like.

After a water change, if you notice fish breathing rapidly, adjust the aeration and water flow in the tank. Most saltwater aquariums aim for a 10-20x turnover rate or higher.

Keeping proper water movement will prevent your fish from rapid breathing due to the loss of oxygenated water.