In this article, I will show you my picks for the best shrimp you can have in your saltwater tank.

One of the most valuable members of a saltwater aquarium clean up crew is a shrimp. They are also one of the most popular invertebrates kept in reef tanks.

Shrimp are natural scavengers and do a great job of cleaning up your tank. Shrimp will remove non-living organic matter which helps keep your water clean.

Not only do they perform this important job, but many shrimp will are known to clean parasites off the bodies of certain fish. They are very beneficial to have.

They are also very colorful and entertaining to watch. Most saltwater shrimp are peaceful and will get along with other tankmates.

As there are many different types of shrimp to choose from, it can be difficult to decide which ones are best for your tank.

Here are 5 of the best options for you to consider. 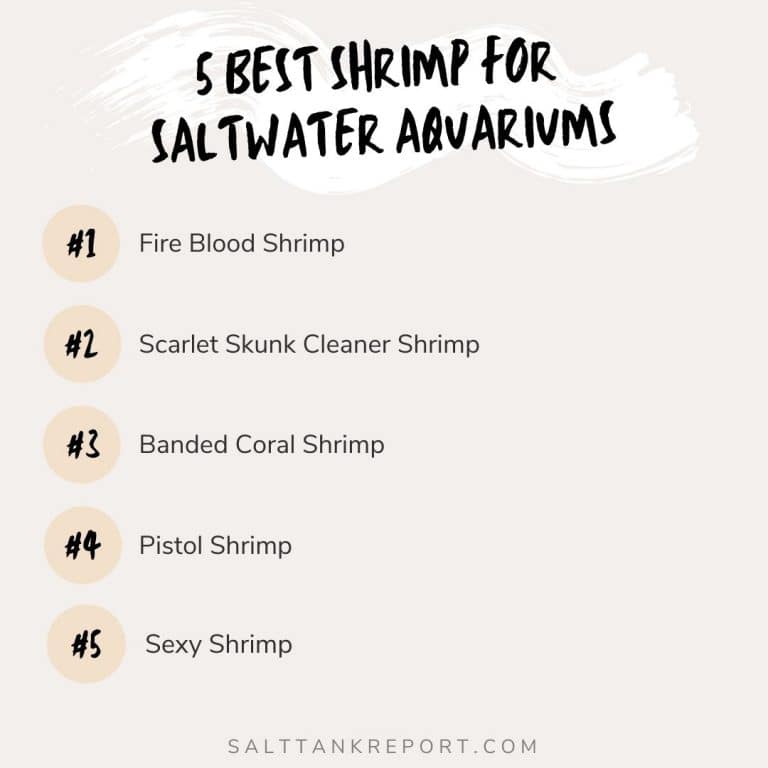 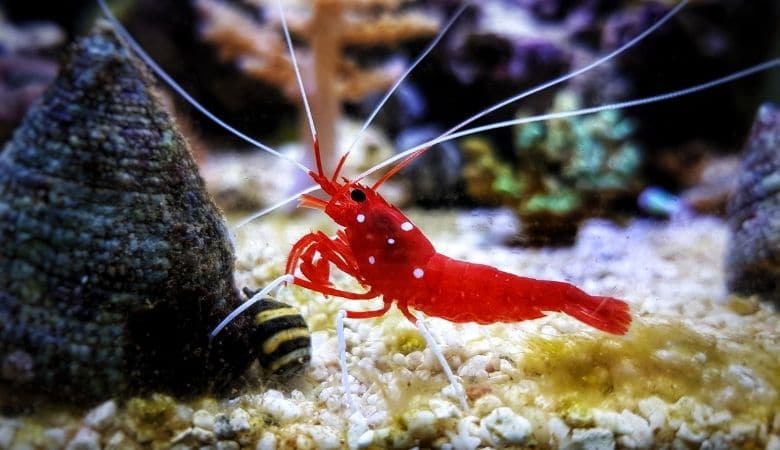 If I had to pick the one shrimp that stands out from the rest in terms of appearance and personality, it’s the Blood Red Fire Shrimp.

These shrimp are very colorful with a deep red body and white markings.

The Blood shrimp is fairly shy when first introduced to the tank. They will tend to hide quite a bit during the day but over time they will become more active and out into the open.

Once they are comfortable in the tank, they will be very active in chasing down food and moving around the tank searching to set up a cleaning station for fish to stop by for a cleaning.

They are not as active as a cleaner as the Cleaner shrimp is but they still perform the duty of keeping fish clean.

Blood shrimp can be territorial both towards their own kind and other Shrimp. Although I have had success keeping them together.

If kept as a mated pair, they should have a fairly large tank to live in. A 55 gallon or more is recommended.

They are very easy to feed and will accept most flake and pellet foods. They love frozen foods that you would normally feed your fish and do a great job keeping uneaten foods off the bottom of your tank.

Blood Red Fire Shrimp are reef safe. They may run across certain corals but don’t generally bother them. 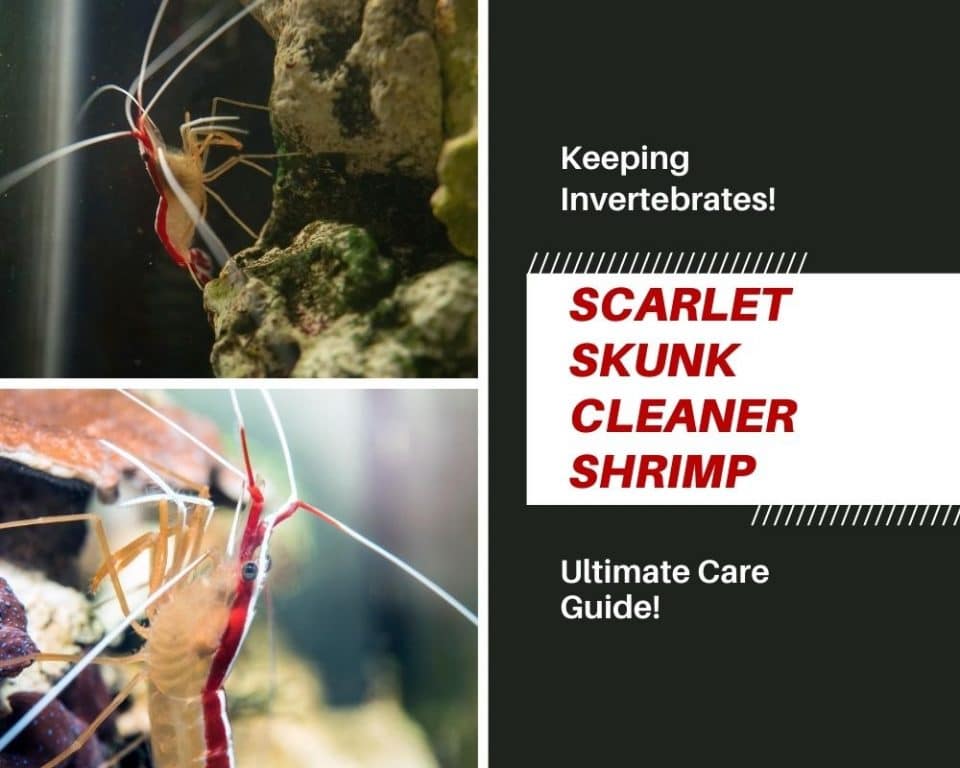 The Scarlet Skunk Cleaner Shrimp is well known for its cleaning capability for both your tank and fish. They can be kept in both fish-only setups or reef aquariums.

Cleaner shrimp can be seen in the wild climbing into the mouths of large predators to clean out anything that shouldn’t be there. It is common for them to crawl over the bodies of other fish to remove parasites like ich.

The Scarlet Skunk Cleaner Shrimp is very peaceful and can be kept in groups without any aggressive behavior.

Although they are colorful, they are not as vibrant as the Blood Shrimp.

Scarlet Skunk Cleaner Shrimp will eat most foods you offer them similar to the Blood Shrimp. They also do a great job gathering up uneaten foods to munch on keeping your tank clean.

The Cleaner Shrimp is also reef safe but may be seen crawling around certain corals. 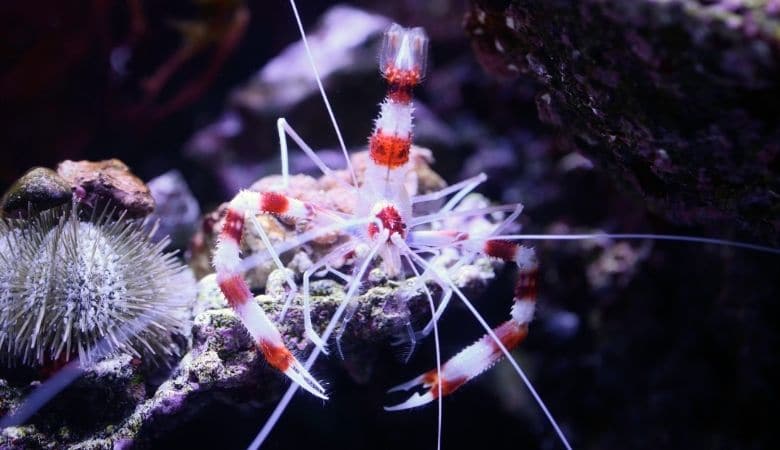 The Banded Coral Shrimp is one of the best scavengers that you can have in your tank. They are also considered to be one of the more aggressive types of saltwater aquarium shrimp.

This is one shrimp that you don’t want to keep with other shrimp. While it’s possible they will tolerate other species, they will not tolerate each other. They will fight to the death and should only be kept singly or as a proven mated pair.

It is also possible for these shrimp to attack certain fish at night when sleeping. Although it’s not too common, it can happen if you have small, slow-moving fish. They tend to chase them and defend their territory if certain fish swim close by.

Banded Coral Shrimp are very active cleaners and will also clean any fish that might swing by for a cleaning. They are very entertaining to watch and are a great choice if you are a beginner.

If you are dealing with bristle worms in your tank, consider getting a Banded Coral Shrimp. They will eat them helping to control the population.

Pistol Shrimp are probably the most unique and interesting types of saltwater shrimp. They have a special claw that I call a stun gun which creates a cavitation bubble. This basically creates a loud snapping sound and pushes water away from the claw-like a bullet to stun, attack, kill, and deter others away. Very cool.

They are very small but powerful.

Another unique characteristic of the Pistol Shrimp is the bond it forms with a Goby. It’s common for the Yellow Watchman Goby and Pistol Shrimp to pair up to protect and help each other out.

The Goby has much better vision than the shrimp and will alert the Pistol Shrimp of any dangers.

The Pistol Shrimp will help build caves for them to live in and provide food for the Goby.

They both have jobs that will help each other.

Pistol Shrimp are considered to be reef safe and won’t bother corals you are keeping.

There are many different species of Pistol Shrimp for you to choose from. They prefer a deep, fine sand substrate for them to dig in to create tunnels.

One of the smallest saltwater shrimp is the Sexy Shrimp. If you have a smaller tank or a nano tank, these are a great option.

These shrimp are unique as they have a certain shake or shimmer to their body which they wave around in the water. It is quite interesting to watch.

The Sexy Shrimp can be kept as a single or with multiples in the same tank. They are not aggressive with each other.

These shrimp love to hang out with an anemone and use it for protection. Sexy Shrimp are so small and not aggressive so they make an easy target for predators.

One of the biggest concerns with keeping Sexy Shrimp in your saltwater tank is that you can not keep Clownfish with them. As much as it would seem they would get along with each other, the Clownfish will not accept the fact that the shrimp is bonding with an anemone.

The Clownfish will become very aggressive and may even kill the shrimp.

Sexy Shrimp will also bond with corals from time to time. They are reef safe and won’t harm your corals. They are omnivorous and will eat any sort of prepared food. Dry and frozen foods will be accepted along with scavenging around for bits of uneaten food.

How many shrimp can you have in a saltwater tank?

Depending on the types of shrimp you plan on keeping, you can keep multiple shrimp in a saltwater tank. It is recommended that larger shrimp be kept in tanks above 50-gallons. Only keep 1 shrimp if your tank is smaller than 50 gallons. If you have more than 2 or 3, you should consider using a 100-gallon tank if the shrimp are aggressive towards each other. Although there are no guarantees that a larger tank will stop aggression.

Certain shrimp like the Sexy Shrimp are very small and not aggressive. You can keep several of them together in the same tank.

Cleaner Shrimp are omnivores and generally eat a mix of dry and frozen meaty foods. They are scavengers and will pick at most foods in the tank. They are not known to eat algae but may eat certain algae marine foods in the form of pellet, flake, or frozen. They won’t eat algae off the glass or rocks.

There are many different types of shrimp that you can have in your saltwater tank. The ones mentioned above are just a few but are some of the most popular and unique shrimp available. Not only are they colorful and interesting to watch, but they provide many advantages for all saltwater tanks.