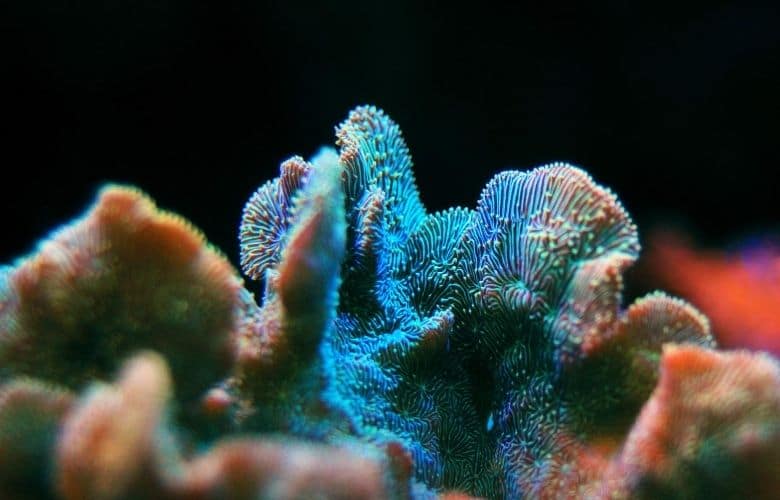 SPS corals are known to be more difficult to keep than other corals. In order for SPS corals to stay healthy and thrive, they require more attention and care than some of the soft and LPS corals. Many reef keepers love to keep SPS as they are very unique and colorful.

There are certain SPS corals that require more attention than others and should be only kept by experienced hobbyists. Some require pristine water conditions, specific lighting, and water flow. Not all corals are for beginners. Many small polyp stony corals are best to incorporate into a mature aquarium that has been thriving and cycled for between six months and a year. SPS corals can sometimes be difficult to integrate into aquariums, although many varieties are hardy once they acclimate.

Although certain SPS corals are known to be difficult to keep, there are some that can be kept easily providing basic needs are met. Providing a stable environment is key to keeping them healthy. They can be more sensitive, so monitoring your water conditions and keeping up with routine maintenance is important.

The following list of 5 SPS corals are easiest to care for. If you are considering trying a few SPS corals in your tank, give these ones a try. 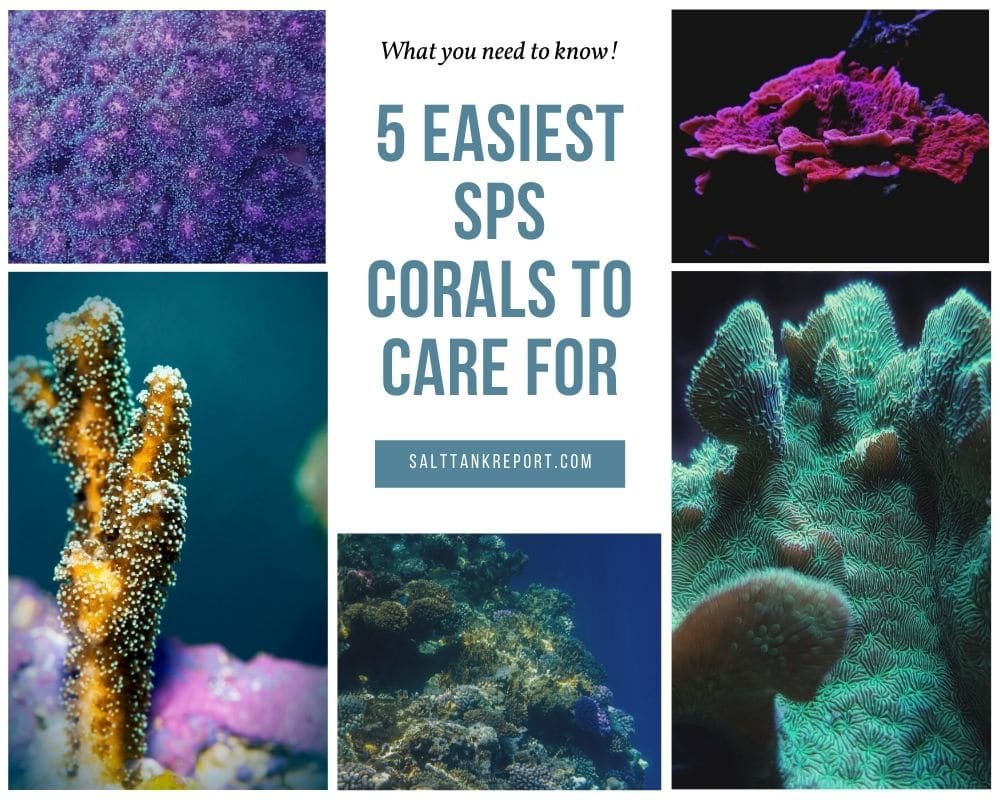 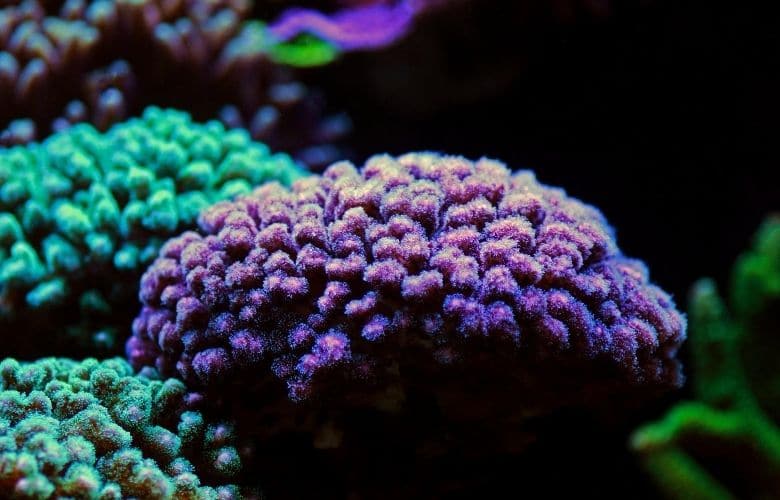 Pocillopora corals, also known as cauliflower or lace corals, are widely considered to be some of the easiest SPS corals for beginners, and they’re also brightly colored, making them a beautiful addition to the aquarium. These corals are most commonly pink or green but can also be brown, yellow, off-white, or purple.

These corals are natural survivors, making them an excellent choice for aquarists who have just begun keeping SPS corals. Even when placed under extreme stress, Pocilloporas can eject their polyps, which will then create new colonies.

Pocillopora corals are considered to be quite peaceful, but room should be provided for them to expand, as they often grow very quickly. They can be placed near the middle or top of the aquarium. These corals prefer a strong water flow and a good amount of bright light, so they will grow well in the open where they can get both easily.

Pocillopora corals prefer a water temperature between 72 and 80 degrees Fahrenheit with a pH that rests between 8.1 and 8.4. A specific gravity of 1.023 and 1.026 is ideal. Pocillopora corals are much more tolerant of a variety of water conditions than other small stony polyp species as long as there are no dramatic fluctuations in water chemistry or temperature.

In order to remain in peak health, Pocilloporas should be target fed micro-foods a couple of times each week. Feeding is often performed during the evening, as this is when corals naturally extend to look for food. Most corals, however, will adjust to a particular feeding schedule, even if that happens during the morning or afternoon. These corals will also benefit from the addition of certain minerals, including strontium, magnesium, and calcium. 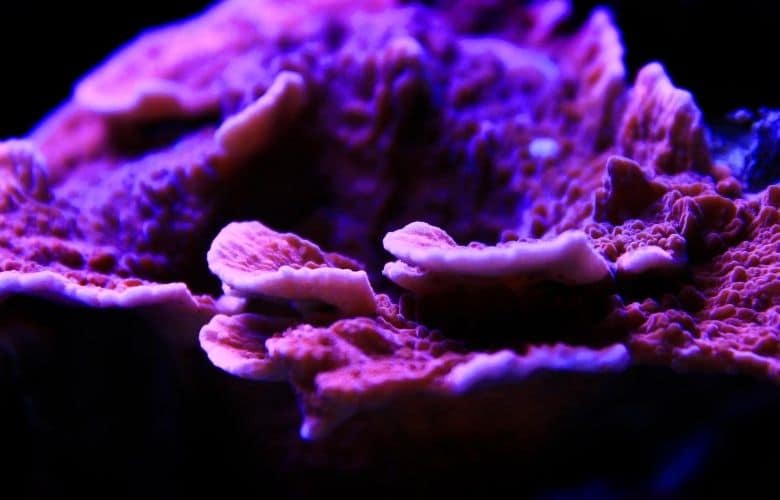 Another great option for easy SPS corals is Montiporas. These corals are available in a wide variety of growth forms and vivid colors, including green, orange, blue, and purple. Different Montipora varieties require different care and may grow more or less quickly.

One of the most popular Montiporas, for example, is the Montipora Capricornus. This is a species that forms fast-growing plates. It’s peaceful and hardy, making it one of the best SPS corals for beginners.

Because they have the ability to grow so quickly, Montipora corals should be given adequate space when placed in the aquarium. However, they’re generally not aggressive, so aquarium keepers shouldn’t need to worry too much if they do reach out to their neighbors.

Montipora corals generally prefer medium to high light. They also tend to enjoy a stronger water flow. However, medium water flow is often recommended, depending on the variety. Some Montipora can react poorly to heavy water flow. In addition, some plate Montipora corals may actually be caught and lifted up by a current that is too strong.

Montiporas prefer a water temperature between 72 and 78 degrees Fahrenheit, a pH between 8.1 and 8.4, and a specific gravity between 1.023 and 1.025. These parameters may vary slightly depending on the specific Montipora species, so it’s important to research the species’ exact needs before introducing it to the aquarium.

Like many other coral species, Montiporas thrive when calcium, strontium, and magnesium are added to the aquarium. These corals also appreciate some feeding, even though they get most of their food through photosynthesis. Food can be offered about once a week. Zooplankton or other micro-foods often work well. These corals will also do well when kept in an aquarium with fish. Fish produce nitrogen, which helps to keep corals healthy. 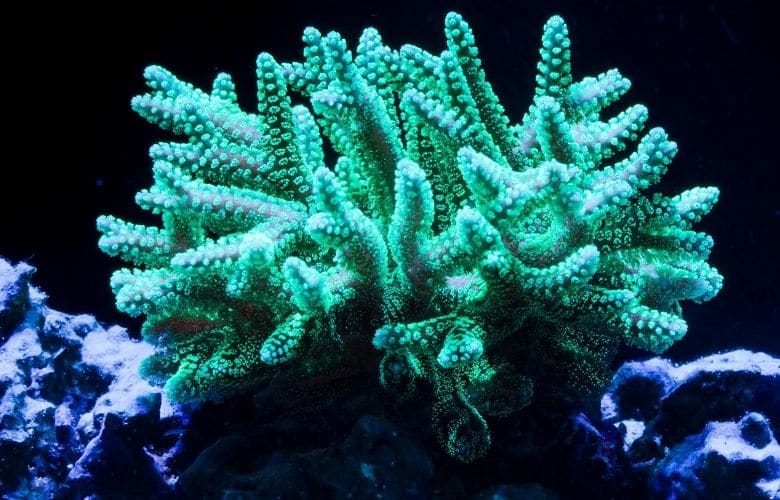 Bright pink, purple, orange, green, or yellow, the Birdsnest coral is one of the most interesting and beautiful corals to keep and is also a great choice for beginners. This hardy coral gets its name from the fact that, as it grows, its branches will twist together, coming to resemble a bird’s nest.

This coral is quite delicate, so it should be given adequate room to grow when it’s placed in the aquarium. These corals can also grow to be relatively large, with branches that extend to between one and one and a half feet in length. However, Birdsnest corals are relatively peaceful and will generally get along well with a range of peaceful tankmates.

Birdsnest corals prefer a water temperature between 72 and 82 degrees Fahrenheit, with temperatures at the warmer end of this range being ideal. A pH between 8.1 and 8.4 and a specific gravity between 1.023 and 1.025 is perfect.

Like most SPS varieties, Birdsnest corals get most of their energy from photosynthesis, so they don’t require too much food. However, small, infrequent feedings of micro-plankton or other micro-foods can help to keep the coral healthy. Be sure not to overfeed when offering nutrients to any SPS coral. Intense feeding can sometimes stress the coral and can also cause an accumulation of waste in the aquarium.

The addition of trace elements as well as magnesium, calcium, and strontium is also essential. It’s also always important to maintain balanced alkalinity, resting somewhere between eight and 12 dKH. 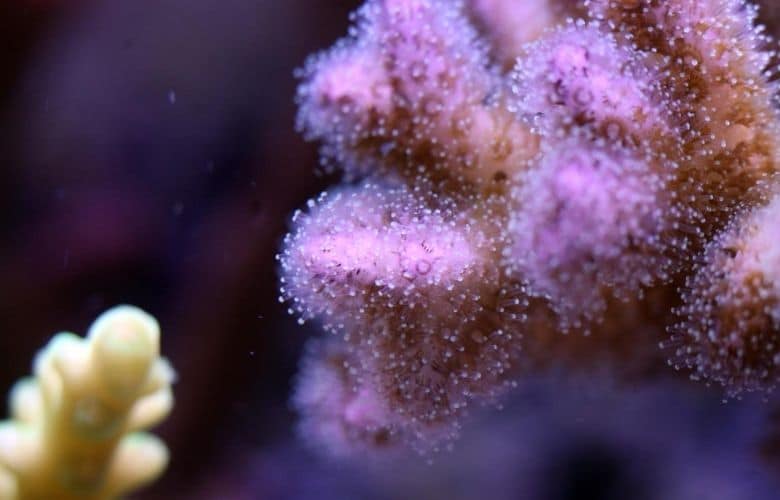 Also commonly known as the cat’s paw coral, Stylophora corals are often one of the best choices when it comes to easy SPS corals. These peaceful corals are available in several bright colors, including green, pink, and purple, and their branching limbs form fantastic and interesting shapes. Unlike the branching structures of the Birdsnest coral, which have sharply pointed tips, the ends of the branches of the Stylophora are rounded.

Stylophora corals are quite hardy and, although they do prefer ideal water parameters, they will adjust to a wide range of water flow and lighting variances. Generally, however, these corals prefer a strong water flow and medium to high light. They should be placed in an open area with plenty of space for growth where they can also get the light they require to photosynthesize. A place near the middle or top of the aquarium will ensure that they receive both strong water flow and direct light.

Stylophora corals won’t need to be fed often, but gentle target feeding once a week can help to ensure they’re getting the nutrients they need to thrive. Micro-plankton is the perfect food for these corals. It’s often best to feed corals in the evening, as this is when they usually extend their polyps to catch food floating through the water. Adding a balanced amount of strontium, magnesium, calcium, and trace elements will also ensure that the Stylophora coral receives the nutrients it needs. 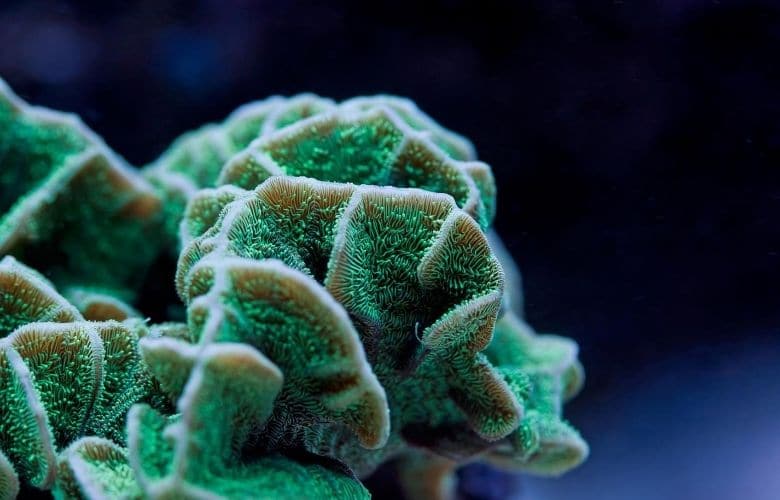 Often considered to be one of the easiest corals to care for and propagate, the Pavona grows quickly and forms beautiful disc shapes. Pavona corals are often called cactus corals due to their rounded, wavy plate appearance. These corals can be found in a range of colors, including green, orange, and tan, and they will glow under certain types of light.

Pavona corals can be placed anywhere in the tank. However, it’s important to give them plenty of room. These corals grow very quickly and can form large colonies. In addition, they’re semi-aggressive. In the evening, when seeking food, sweeper tentacles can reach out and injure other corals.

Pavona corals do well in water temperatures between 72 and 78 degrees, with a pH between 8.1 and 8.4 and a specific gravity between 1.023 and 1.025. These corals can thrive under either medium or bright lights. Unlike many other SPS varieties, they don’t require as much direct light, and won’t change color or grow faster when exposed to a high amount of light. In fact, adding too much light can actually damage this coral variety, causing it to take on a bleached appearance.

Strong water flow is recommended, and it’s often best if the current isn’t always steady but instead moves around a bit, creating a more random pattern. A strong water current will help to carry food to the coral and, in this particular coral’s case, will encourage the fuzzy polyps to move in a wave-like motion.

Pavona corals don’t require too much extra food, but they can be target fed micro-foods such as micro-plankton and even brine shrimp. In addition, trace elements, calcium, and strontium should be added periodically to the aquarium. It’s best to offer food when the coral’s tentacles are extended for feeding.