The Flame Angelfish is very active in the aquarium and loves to swim in all areas of the tank. They can be kept as a single fish, or if you have a large enough tank, then multiples can be kept. They can have aggressive behavior toward other angelfish but overall they are considered peaceful and don’t bother other livestock in the tank. The exceptions would be the odd time they pick at coral polyps.

As mentioned the Flame Angelfish are very colorful and make an amazing centerpiece fish. They have a mostly red body combined with an orange center. They have black vertical bars on them and blue fins. There is no big difference in the color of males and females, they are generally the same. Depending on where these fish are collected from, they can vary in color slightly. 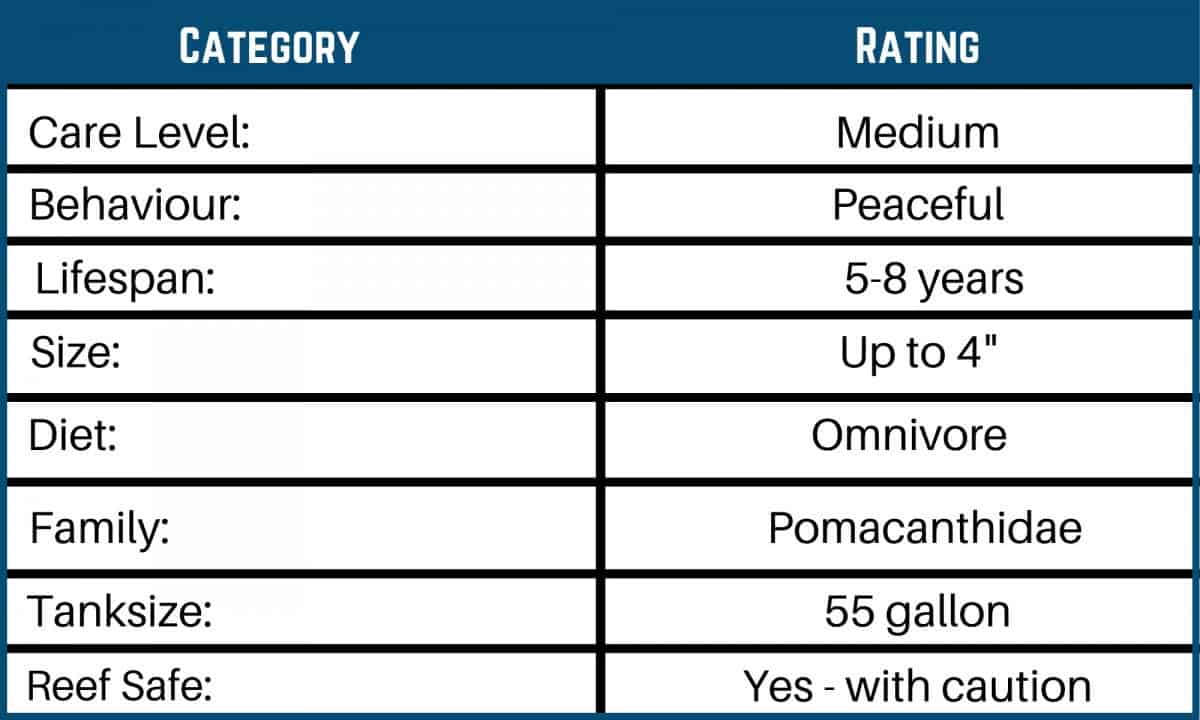 The Flame Angelfish is found in the tropical waters of the Pacific Ocean. Most commonly seen in Marshall, Line, and Cook Islands. Also found in the Hawaiian Islands although it is less common. In the wild, they are known to be very active swimmers and continuously move around picking at rocks searching for food.

When you first introduce the Flame Angel into your tank, you may notice that they are very timid and hide. Once they become comfortable and get used to their surroundings, they will become more active. They are generally a well-behaved fish and don’t cause many problems. They are territorial and can be aggressive with other angelfish so if you plan to have more than 1 in your tank, make sure the tank is large enough for them to establish their own territory and hiding places. Also, note that you can not have 2 males in the same tank. They will fight until only 1 is left.

Flame Angels are omnivores and mainly live off algae and tiny animals in the natural habitat. In the aquarium, they will be very active picking in the live rock in the tank. They will do better in a well-established tank with plenty of live rock and algae growth for them to graze on.

You can also feed them algae foods such as frozen, pellets, and flake. A good variety of foods is important. They will accept spirulina, shrimp and other meaty fish foods. They should be fed a few small meals per day. It’s important not to overfeed as this can lead to a variety of issues. NLS makes a great saltwater pellet and flake food that Flame Angels will eat.

If you plan to keep only 1 Flame Angelfish, you should keep a tank size of 55 gallons or more. Multiple fish should be kept in a minimum of 75-90 gallons. The added space is necessary to keep down the aggression and territorial fighting between pairs.

The tank should contain plenty of established live rock with lots of hiding places and open swimming areas. They are very active swimmers and love to move around all areas of the tank.

As mentioned above, they are considered reef safe but you should exercise caution with them. They are known to pick at coral polyps and even clams and other inverts. Generally, this is only a problem if they are underfed, but it’s difficult to tell if they will bother corals and inverts. I have personally never had a problem with them, but I know many people have.

Flame angelfish breeding is difficult and not common in the home aquarium. They breed similar to other angelfish, but it is considered very difficult and rare.

The best thing you can do to prevent illness is to provide pristine water conditions and plenty of hiding places for your Flame Angel. They are prone to certain diseases such as White Spot Disease, and Marine Velvet. These are the most common diseases found in Flame Angels. These are a parasite which if caught early, can be treated. It’s important to quarantine new fish and have a hospital tank ready if your Angelfish becomes sick.

The Flame Angelfish are usually easy to find online and in local saltwater fish stores. They are more expensive than other Dwarf Angels such as the Coral Beauty. The price of them seems to be increasing over the past few years. Expect to pay around $60-$80 for a small Flame Angel and $90-$100 for a full-grown adult.

Should you consider buying a Flame Angelfish for your tank?

Yes, I believe the Flame Angelfish is one of the most stunning fish that any saltwater hobbyist will enjoy. They are fun to watch, have lots of personality and generally won’t bother others in the tank. The exceptions being other Angelfish and they may nip at coral polyps and inverts. Other than that, they will make a great addition to your tank.