There is no denying that the Clownfish is one of the most popular fish kept in saltwater aquariums.

They are a great beginner fish although some of the most seasoned hobbyists keep them as well.

They add so much personality and color to your tank.

Clownfish are generally well mannered and peaceful to others, although some can be bullies at times.

Even though the clownfish is hugely popular, and one of the easiest saltwater fish to care for, they also have needs and requirements that need to be met on a daily basis.

In this Clownfish care guide, we will discuss some of these needs (feeding requirements, tank requirements, etc) plus many other facts that will help you care for your clownfish properly. 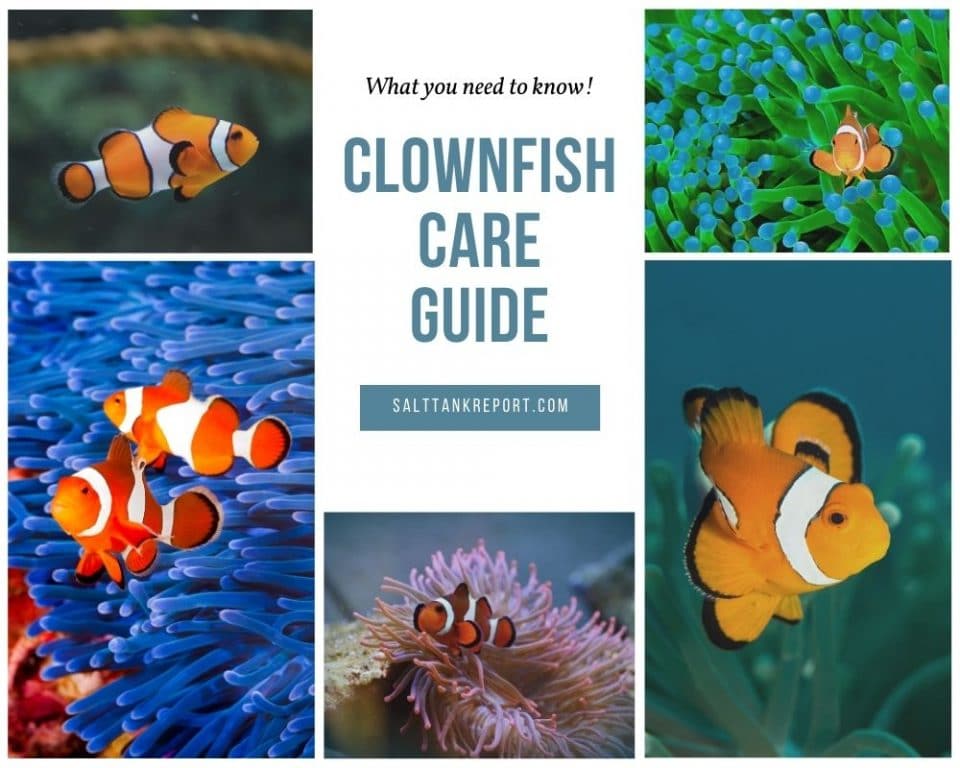 Clownfish are a small species of fish that can grow up to four inches in length. With that being said, most Clownfish stay significantly smaller in size.

Clownfish are most commonly known for their coloring pattern, which is typically orange with white stripes that are commonly outlined in black.

Stripes on Clownfish come in threes; they have one behind their gills, one in the center of their body, and one at the bottom of their caudal fin.

Because the caudal fin of the Clownfish is rounded, they are considered to be less than average when it comes to their swimming abilities.

For this reason, they can easily be overpowered by strong water currents and filters.

In the wild, Clownfish typically live between 6-10 years. In captivity, this estimate is slightly less, with the average lifespan for the Clownfish being 6 years.

The exact lifespan of this species will depend on the tank conditions and the quality of care it receives. 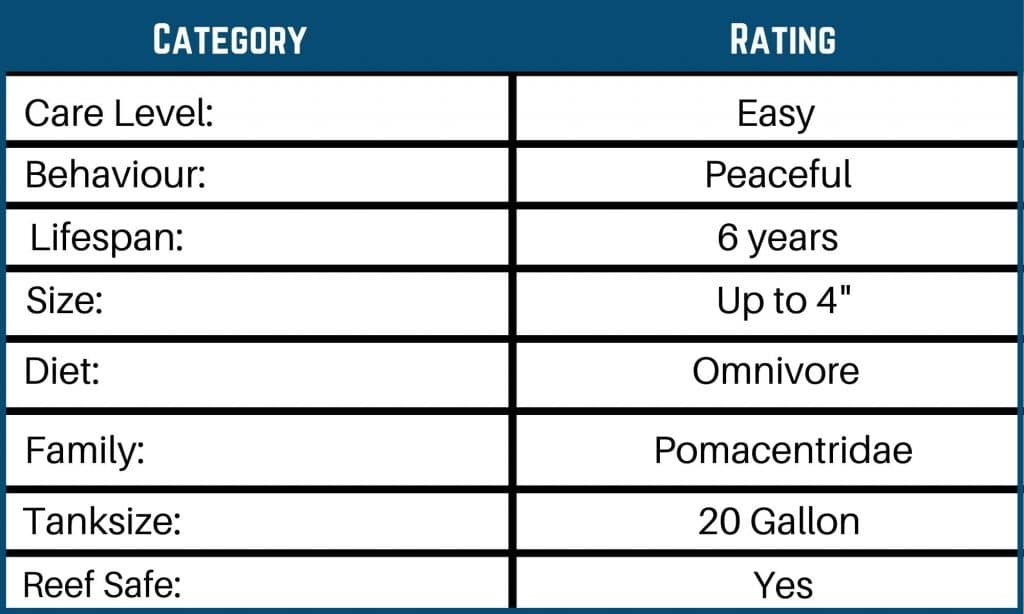 Clownfish are omnivores, which means that they eat both plant and animal varieties. Although feeding high-quality flakes or pellets will do, these fish thrive when they have a more varied diet. A combination of frozen and live foods is the best diet for your Clownfish. Meals can include anything from algae to worms, zooplankton, and tiny crustaceans.

While Clownfish can survive on being fed every other day, it is recommended that you feed them 2-3 times per day. Feeding them regularly will help them to grow faster and healthier.

Each day, feed your Clownfish as much as they can eat in under 1 minute. You want to make sure that whatever food you are putting in the tank is being eaten and isn’t sinking into rock crevices which can lead to water quality issues.

If you are hoping to breed your Clownfish, you will need to significantly increase their feeding portions to three times per day.

Smaller Clownfish need to be fed near their “safety zones” ( a small area where they will usually be spotted until they get larger). Once larger, they still need to be fed away from areas of strong water flow that can make feeding difficult. Juveniles will need to be fed more often than adults.

The Clownfish requires a minimum tank size of 20 gallons. Although a small single clownfish can live in a 10-gallon tank. Some people think that because of the symbiotic relationship between Clownfish and sea anemones, a Clownfish cannot live without their host anemone. This isn’t necessarily true.

Because anemones don’t generally do well in a tank, fish enthusiasts have now started breeding tank raised clownfish. When Clownfish are tank raised, they don’t require anemones for survival.

If, however, you purchase a captured Clownfish and wish to raise it with its anemones, your tank must be first designed around the anemone, and then around the fish. This is because anemones are more difficult to keep than Clownfish.

Unlike Clownfish which only require 20-gallon tanks, anemones require at least a 50-gallon tank. Clownfish don’t require any specific type of lighting, but anemones do. If you are raising anemones and Clownfish together, be sure to research the specific lighting needs of the anemone to ensure that you are meeting its particular requirements.

Specific Gravity is especially important for Clownfish and should be kept between 1.021 and 1.026.

Clownfish are considered to be a very peaceful breed of saltwater fish. With that being said, if you start mixing Clownfish species, you may start to see some aggressive behaviors.

This is especially true if there is a host anemone within the tank, as clownfish will often fight to defend their territory. If you do have multiple Clownfish within your tank, make sure they have plenty of room to avoid one another.

1 pair per tank is generally the best option.

In the wild, Clownfish cohabitate with a variety of other reef fish. They are extremely versatile and can do well in smaller tanks, as well as within larger communities of fish.

Popular tank mates for the Clownfish include, but are not limited to, Damselfish, Tangs, Angelfish, Dartfish, Gobies, Puffers, and marine invertebrates.

Keep in mind, however, that the Clownfish is a very small and slow-moving species in comparison with many other fish. As such, they should not be placed in a tank with larger, aggressive, carnivorous fish like Groupers and Lionfish, as the Clownfish may become an easy target and quick lunch for these species. 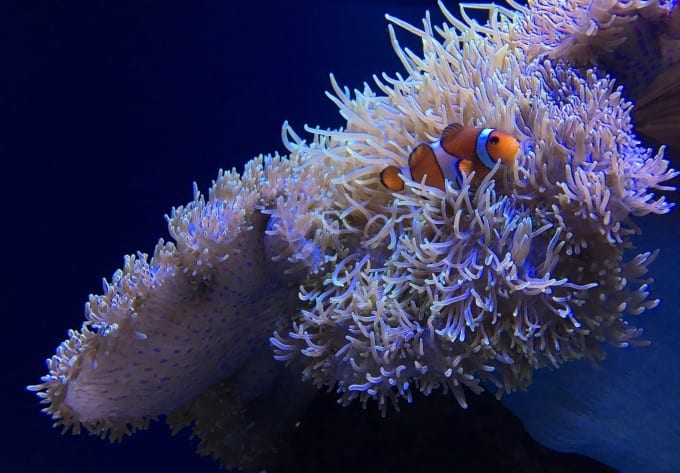 Not all saltwater fish are considered reef-safe, but the Clownfish does not fit into this category. They will not harm your corals and are considered compatible with many other reef fish.

The exception to this rule is the maroon clownfish which is larger in size at maturity and may show some aggressive behaviors.

When Clownfish are breeding, they really put on quite a show. While trying to please the other mate, pairs of clownfish will perform a variety of rituals that might include flipping upside down or pressing their dorsal fins together. In order to reach this stage, however, the water temperature must be 83 degrees F or higher.

Once the two fish have courted one another, they will begin spawning within 5 days.

Clownfish pairs produce anywhere from fifty to five hundred eggs each month, which will hatch within 8 days.

While breeding can be done in captivity, it can be very difficult and may take a few failed attempts. If you can find a fish store that sells tank raised clownfish, these are always recommended because they adapt better to their new aquarium environment.

Clownfish Facts – Did you know?

That number may seem like a lot but for one of the most popular saltwater fish in the world, I was expecting that number to be higher.

The males are able to turn into a female but this can not be reversed. Once they are female, they stay. They are all Hermaphrodites meaning they are a gender-bending fish where they start out as one fish and are able to switch gender later in life.

Clownfish will clack their jaws together to make a clacking sound. This is to produce a warning sound in the event they are in danger or attacked. They can generate about 5 clicking sounds per second.

The anemone’s tentacles have stinging cells called nematocysts that release a toxin when prey or predator touches it. Clownfish, however, are immune to the sting and therefore can host, feed, and be around anemones at will, unlike other fish.

They will fight to the death. It’s important to note that if you have a large enough tank, you can mix multiple Clownfish of the same species. But trying to mix species or having odd numbers mixed in normally does not work out. If you have 3 in the tank, it will become a pair very fast.

Meaning they will eat meat and plants. In the aquarium, they will gladly accept a wide variety of foods. A good quality pellet and flake food is fine and they love frozen foods as well.

Normally, they are laid on or under a rock and will be orange in color. The male will take care of the eggs by fanning or airing them. Any eggs that are dead will be picked off. The eggs will hatch in about 7-10 days.

As Clownfish are immune from the sting of the anemone, they use this to their advantage to keep safe.

They can live longer in the wild, the average being 10 years. It is common for some species to live much longer but it can vary.

These 10 anemones are part of 3 families. Actiniidae family, Stichodactylidae family, and Thalassianthidae family. The most common anemone found in the home aquarium is the Bubble tip.

Also, the color bands that come in orange, red, yellow, purple, and brown mixed with black and white resembling the face paint that clowns wear.

The fish are either captured from the wild or are bred in captivity.

This is because the two species have a symbiotic relationship, meaning they both provide benefits to one another. While the anemones provide shelter for Clownfish, Clownfish remove parasites and scare away intruders from the anemones.

Is the Clownfish the right fit for your aquarium?

Whether you are new to the aquarist hobby or a long-time hobbyist, the Clownfish can make a beautiful and unique addition to any tank. They are one of the easier types of fish to look after, so they make the perfect choice for beginners. They make a stunning addition to any established saltwater tank. If you have the opportunity to have one or a pair you won’t regret it.