I mentioned in previous articles that clownfish make a great choice for nano tanks. One of the reasons why is due to their size. Clownfish are generally considered a small saltwater fish.

Even though they are smaller, clownfish still grow. Depending on the type of clownfish, they can grow at different rates. So I did some research to find out how fast certain clownfish grow and what sizes they can reach so you can decide if the clownfish will be suitable for your tank.

Most clownfish that are kept in saltwater tanks will only reach around 3-4” in size and have growth rates of 0.5″-1″ per year. Although there are exceptions. Some clownfish can grow at different rates and many will only reach half of that size.

Let’s look at some specific types of clownfish and find out how fast they will grow.

With over 30 recognized species of clownfish known, the Ocellaris is the most commonly kept in saltwater tanks. They are easy to care for and don’t require any special water conditions.

They can be kept in small tanks of around 20 gallons and do well with other tankmates. Smaller clownfish can be kept in 10-gallon tanks when young. Ocellaris clowns can be very small when purchased, around 0.5”-1”.

They will normally grow around 0.5” in the first year, another 0.5-1” the next year reaching a maximum size of 3” when fully grown. This can take anywhere from 2 to 3 years.

With so many variables involved it’s difficult to be precise. It’s rare to see them any bigger than 3” although it does happen. 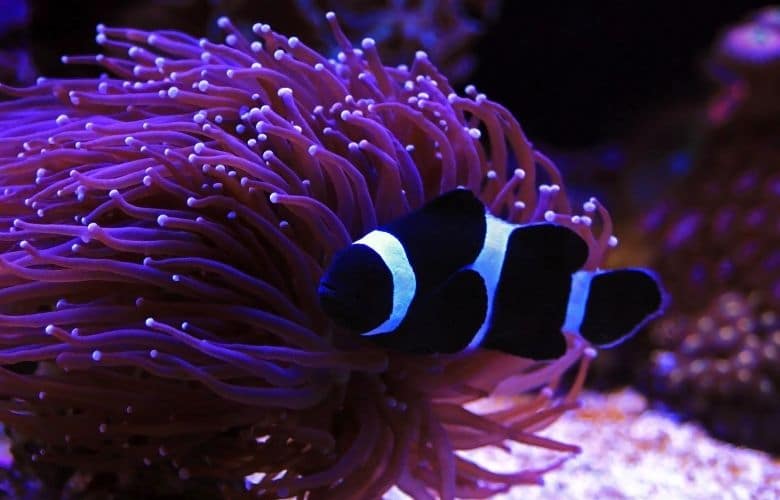 The Maroon clownfish is one of the most aggressive of all clownfishes. They normally won’t tolerate another clownfish in the tank unless they are a mated pair. They will defend their anemone if there is one in the tank which adds to their aggression.

The Maroon clown has a dark maroon body-color with vertical stripes. They can grow to be much larger than other clownfish and can reach 5-6”.

They have a lifespan of 6-7 years and can grow at a rate of 1” per year. These fish should be kept in a tank size of 30 gallons or more.

The Tomato clownfish is somewhat similar to the Maroon clownfish. They are aggressive as well but not as much. The Tomato clown is a very hardy fish and they are great for beginners.

They have an orange body with a single white stripe. They can grow to around 5-6” when full grown and have growth rates of 1” per year. 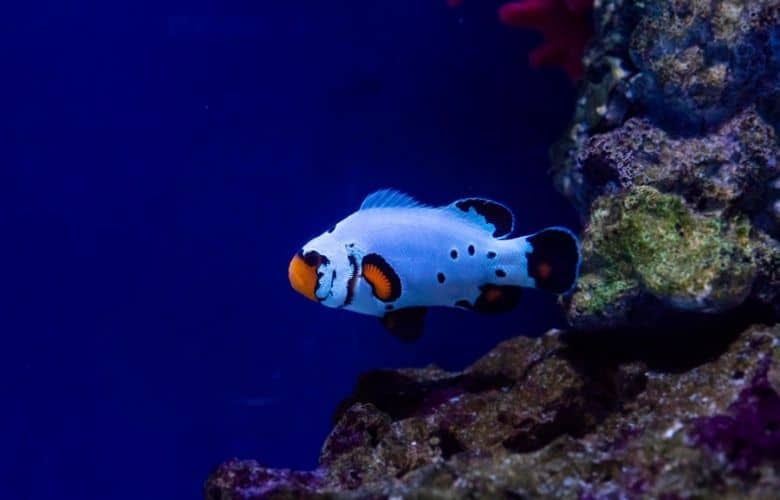 The Frostbite is a designer clownfish that is not as common as the others. They are a type of Ocellaris clown with genetics from the Wyoming white and Snowflake.

They have a mostly white body with orange highlights and black spots. They are a peaceful clownfish and can be kept in smaller nano-sized saltwater tanks.

They are known to grow up to 4” when fully grown but it’s more common to see them around 3”. Similar to other Ocellaris clownfish, they will have growth rates of 0.5”-1” per year.

In the first year, they will only reach 0.5” and then continue to grow at slightly higher rates.

As you can see, it’s normal for most clownfish to grow at similar rates. Although some may grow larger than others, their rate of growth is pretty much the same. Expect most clownfish to take at least a few years to reach full growth.

How often should clownfish be fed?

One of the many great features of most clownfish is they love to eat. It’s rare for them to not accept food and they are not picky eaters.

For optimum health, you should feed them 2 times per day. Limit the amount of food to prevent overfeeding and provide a mix of high-quality pellets and flake like these.

Clownfish are omnivores and love to eat frozen Mysis and a few other live foods.

Are clownfish better in pairs?

Clownfish can be kept either as a single fish or in pairs although It’s more common to keep them in pairs. They tend to be more comfortable together and behavior patterns show that they don’t like being isolated as the only clown in the tank.

The issue with keeping pairs of clownfish is you can normally only have 1 pair. If you try to have additional clowns in the same tank they will be bullied and killed.

It’s usually either a single clownfish or a pair of the same type in the same tank. An exception would be if the tank is quite large and several clownfish are introduced to the tank at the same time when young.

Why are my clownfish not growing?

There can be a few reasons why your clownfish is not growing. Remember they are generally slow growers and might only grow a very small amount each year. It can be difficult to notice the change in the size of some smaller clownfish. Feeding is also a factor. The amount of food and how often they are fed are factors.

Poor water quality can have serious health problems and they may not grow like they normally would. Also, clownfish are hermaphrodites and it’s normal for the female to become larger than the male.

When do clownfish reach maturity?

Clownfish reach maturity at around the 2-year mark when they are 2-3” in size. Sometimes a bit earlier.