In this article, you will learn how to care for the Flame Hawkfish. 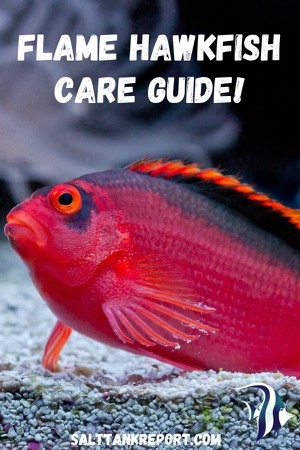 The Flame hawkfish also known as the Brilliant Red Hawkfish, is a very unique saltwater fish due to its shape, color, and personality.

They are very interesting to watch as they spend a lot of their time perched on or within corals or rock. They are considered to be reef safe providing there are no small shrimp in the tank.

Contents hide
1 Overview and Appearance
2 Temperament
3 Origin
4 Tank Requirements
5 Water parameters
6 Tankmates
7 Diet
8 Breeding
9 Cost
10 Can you have a Flame Hawkfish with cleaner shrimp?
11 Should You Add a Flame Hawkfish to Your Aquarium? 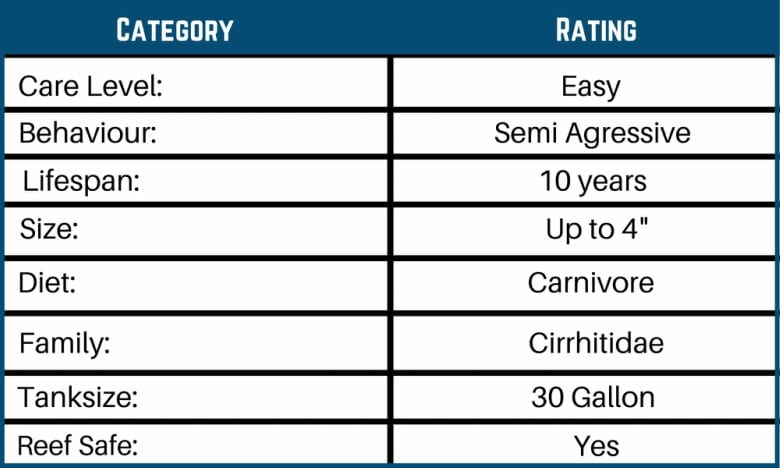 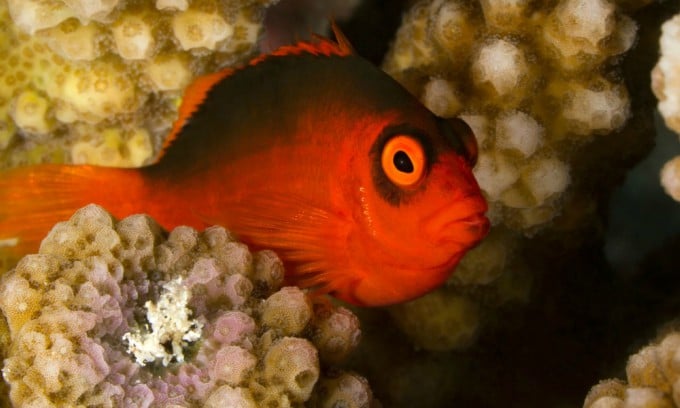 The Flame Hawkfish has a very bright red body with red/orange fins. It also has dark markings along the dorsal fin and eyes. Its eyes give the impression of dark rings around them.  As this fish grows, it’s dorsal fin grows longer and transforms its proper shape. Their body is very thin and narrow shaped similar to a Grouper fish.

The Flame Hawkfish will grow to a maximum size of 4”. They are easy to care for and can live up to 10 years.

The Hawkfish has one of the most unique personalities and temperaments of any saltwater fish. Even though they are small in size, they seem to love perching in between coral branches and showing off their king of the tank style. They are not overly aggressive but they will dominate their territory and will fight off others that try to take it from them.

Another reason why these fish are unique is they can be seen sometimes breaking up fights. If two fish are being aggressive towards each other, the Flame Hawkfish can act as a referee and break up the dispute.

Most of the time they can be seen perched observing the tank around them. They are very observant to their surroundings. They will jump between rocks and can be quite active. As mentioned they can sometimes be aggressive but only to very small fish and others in their territory. Small invertebrates may become a tasty snack for them as well.

One important note about these fish is they are not very good swimmers. They tend to skip or jump around the water as they do not have a swim bladder which would make it easier for them to swim. So avoid keeping them with other aggressive fish that may chase them.

The Flame Hawkfish originated from the Western and Central areas of the Pacific ocean. They can be seen as far as the Ryukyu islands to the north and the great barrier reef to the south.

Despite their small size of 3-4”, the Hawkfish should be kept in a tank size of 30 gallons or larger. They need extra space to establish their territory and to reduce aggression.

Your tank should have plenty of rockwork and if you have corals, they will love to hang out in the branches.

They prefer to hide inside of corals that are similar in color as they can camouflage themselves and be more difficult to be seen. Hiding places are important for these fish. They are bottom dwellers and need places for them to dart into if threatened.

The Hawkfish is a very hardy fish and they can handle less than perfect water conditions. Providing you keep your normal saltwater parameters consistent, they will be fine. They don’t need any special tank conditions. Here is a guide to follow. 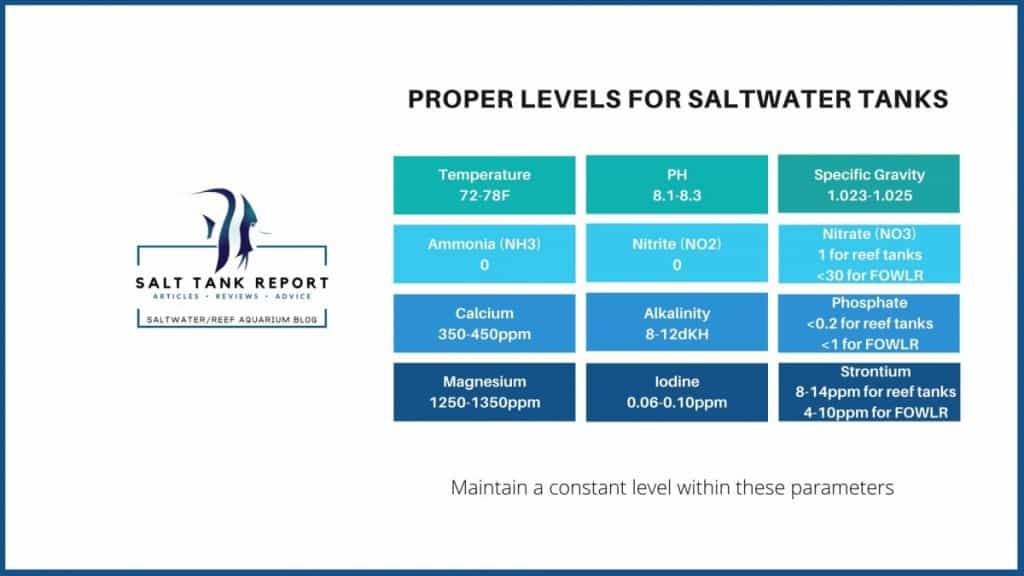 Choosing proper tankmates for the Flame hawkfish is not too difficult. They will get along with most other fish that are not aggressive and won’t interfere with their territory. They are known to be somewhat aggressive with other bottom dwellers that are small and can often swoop down on top of them to attack.

Any fish that swim in the upper regions of the tank is safe and the Hawkfish won’t bother them. You should avoid keeping them with snails, shrimp, and crabs as they will most likely be eaten.

The Flame Hawkfish is a carnivore and loves meaty foods. Raw shrimp, brine shrimp, and crab are common foods that they will eat. They will also eat a variety of aquarium flake and pellet foods once they are comfortable in your tank and get used to it. Frozen foods and dried krill are also favorites to feed them.

They will also eat live foods if they have the chance. As mentioned, invertebrates will be eaten right out of their shell. 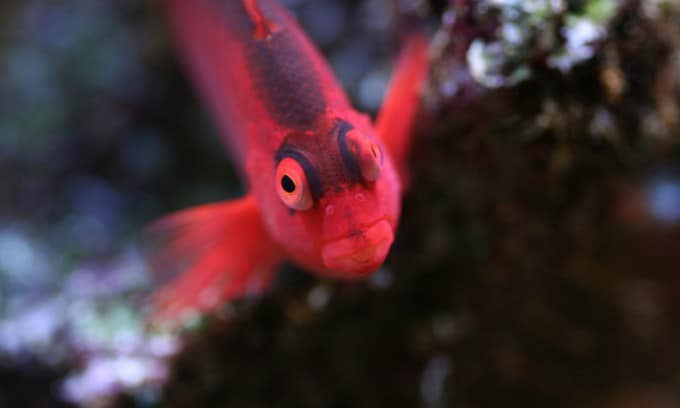 Hawkfish are known as hermaphrodites where they are all born as females. In a group of them, one of the fish will become dominant and form into a male. The males are larger than the females.

They are known to breed in an aquarium with open space near the surface of the water. The female will lay eggs in open water which are fertilized by the male. The eggs will then float away and are not normally protected. They can hatch in around 3 weeks time.

The Flame Hawkfish can be purchased online or from your local fish store. They are easily available. They tend to be fairly expensive at around $60 at the 1-2” size. I have seen them cost more if they are larger and more mature.

Can you have a Flame Hawkfish with cleaner shrimp? 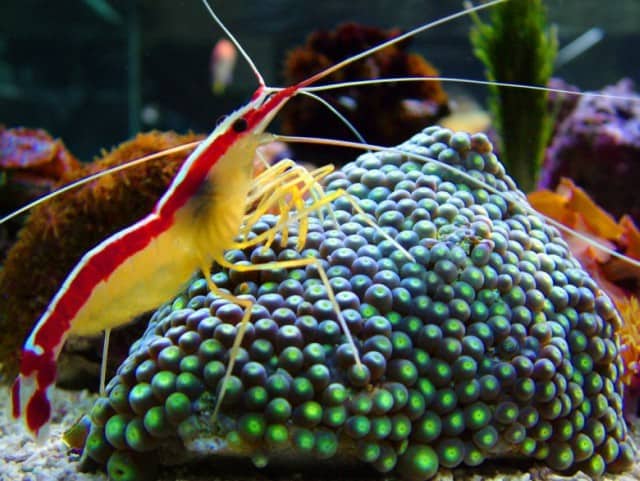 A very common question about these fish is can they live with a cleaner shrimp? The answer is no. It’s possible that they will get along for a short amount of time if they are the same size. But in general, I would not expect them to co-exist in the tank. If you search online, you will see cases where they have been able to live together for a while but it is rare.

Should You Add a Flame Hawkfish to Your Aquarium?

If you have the opportunity to own a Flame Hawkfish and can provide them with the proper environment, yes you should have one.

They are so unique and enjoyable to keep. They don’t require any special water conditions and will get along with many other tankmates. Just remember that they won’t tolerate other bottom dwellers that interfere with their territory and invertebrates are not a good idea to keep. They don’t require a large tank and can live for up to 10 years. They are certainly a fish everyone loves to watch and talk about and I think you would really enjoy having one!