If you are one of those lucky people who has a large saltwater tank, you most likely have a desire to keep large fish in your tank.

Perhaps you are keeping a large fish only tank or fish only with live rock and are looking to add some corals to your aquarium. 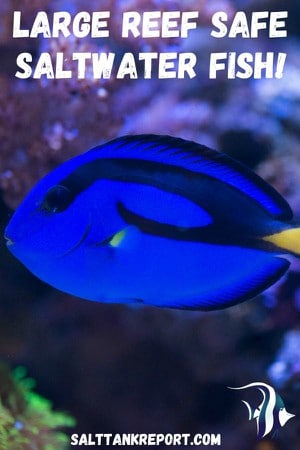 Sometimes large fish and corals do not mix.

Luckily there are some great choices when it comes to choosing larger fish to keep in a reef tank.

In this article, I will show you some large reef safe fish that won’t bother your existing corals or future corals you might be considering.

What is considered a large saltwater fish?

Well, I guess that is up for discussion but for me personally, I consider a large fish to be anything over 6” in size. There is no set number that dictates this. But any fish that is 6” or larger will require a 6-foot tank or bigger so I consider that large.

The following fish will all grow to 6” easily and many will get quite a bit larger than that. They are considered to be reef safe. 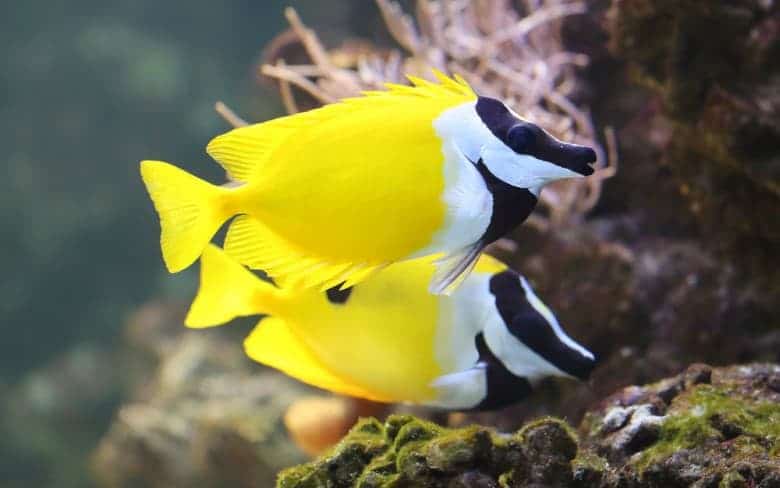 The Foxface is a great fish to keep if you have corals. They can grow to be 8-10” in size and are considered to be peaceful.

The only time you may have a problem with these fish bothering corals is if they are not well fed. There is a chance they could nip at some LPS corals but it’s pretty rare. 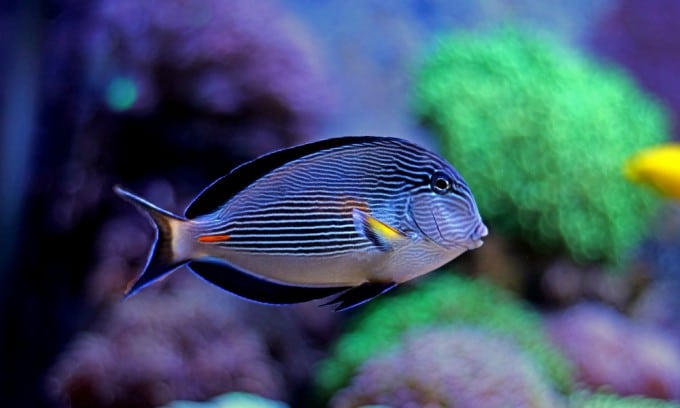 The Sohal Tang is one of the most difficult fish to keep in a saltwater tank due to its aggression as it grows. They can be very aggressive towards other tankmates. Especially other Tangs.

The Sohal Tang can grow to about 16” so a tank size of 250 gallons or more is needed. If you choose your tankmates properly, the Sohal Tang is one of the most beautiful saltwater fish available. They are very active and will need plenty of open swimming space.

They can be kept in reef tanks without any issue. They generally won’t bother corals. 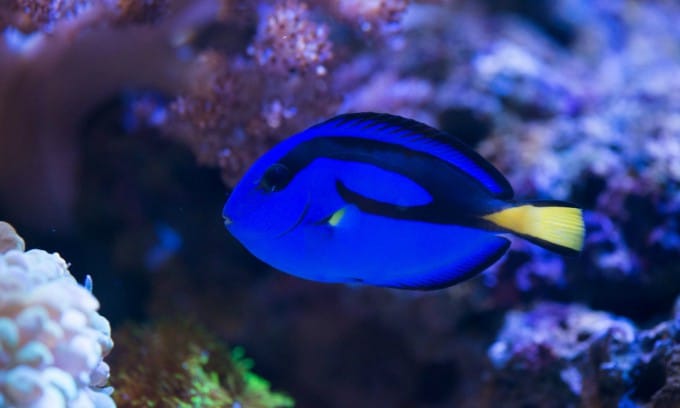 Also known as the Regal Tang, these fish are one of the more popular saltwater fish. They can grow to about 10” and have a lifespan of around 7-10 years.

The Hippo Tang is a peaceful fish and can be kept with other Tangs. They may not except another Hippo tang so if you have 2, you may need to either add more or take 1 out. It is best to introduce them to the tank at the same time.

Although these fish can grow to be quite large, they are commonly sold as a small fish around 1-2” If you have other large fish in the tank, it’s not a good idea to introduce a Hippo Tang at this size. You may have to grow them out with a separate tank until they are large enough to be introduced to your main tank.

Hippo Tangs can be kept in reef tanks and generally won’t bother corals.

The Vlamingi Tang is my favorite of all tangs. They are very peaceful and get along with pretty much all other tankmates. These fish can grow to be very large. It’s common to see them reach 24” which of course requires a huge tank to keep them successfully. A 300-gallon tank or larger is needed for these fish.

The Vlamingi will grow at a higher rate within the first 5 years, and then slow down for the next 5. These fish also have a wonderful personality and love to be fed. I have kept these fish for years and have never had an issue with them bothering corals. They are reef safe. If you plan to keep a Vlamingi Tang, not only do you need a very large tank but be prepared to have it for a long time. They can live for up to 45 years! 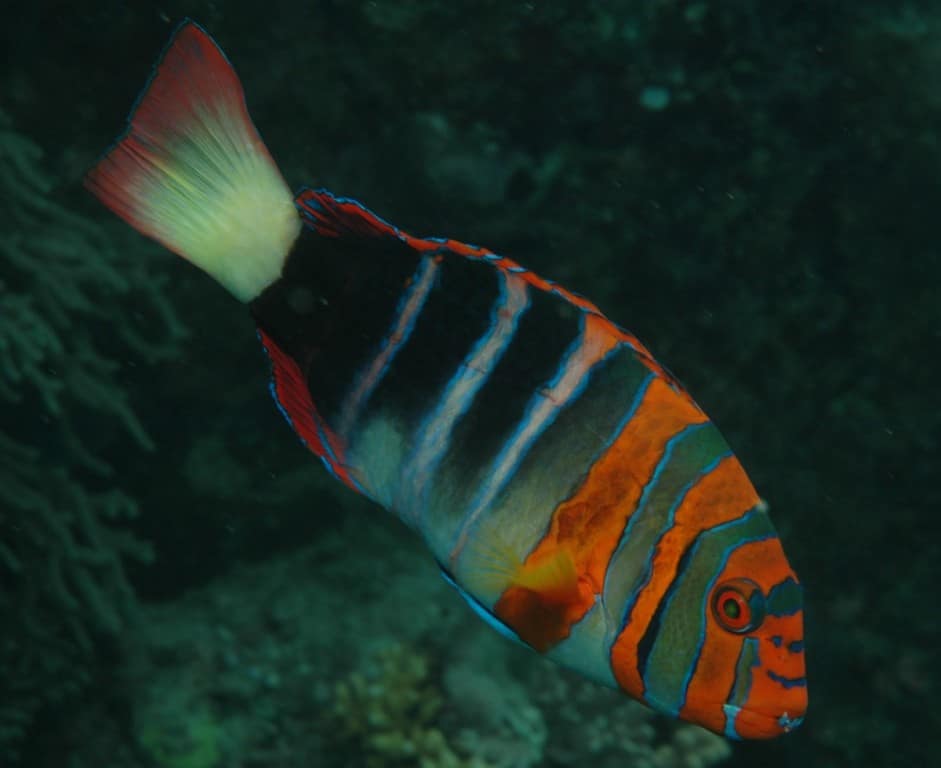 The Harlequin Tuskfish is considered to be one of those showpiece fish that everyone loves to see. They are very colorful and active in the tank.

These fish are considered to be semi-aggressive and won’t bother with most tankmates of the same size. They won’t accept another Tuskfish though so it’s best to only have one of them.

The Tuskfish can grow to about 12” so you will need a large tank of about 180 gallons or more to keep them.

The Tuskfish shouldn’t bother any of your corals but they will eat some invertebrates and very small fish. 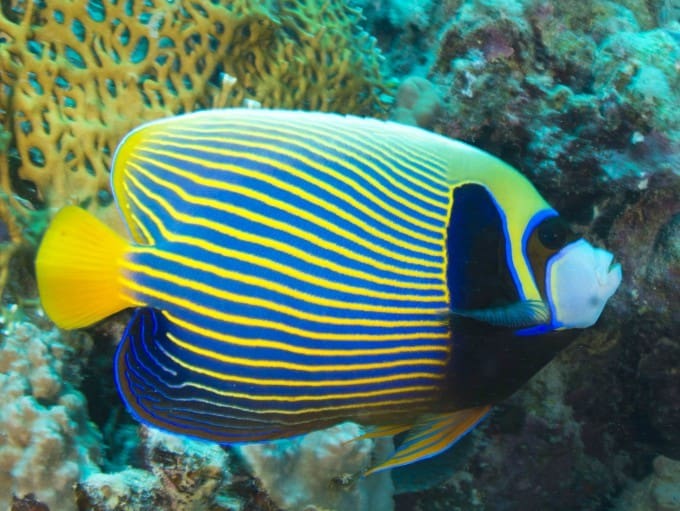 The Emperor is one of the most popular angelfish to keep in a saltwater tank. They have amazing colors and can reach a size of 12”.

These fish can be aggressive and bother other tank mates if they are similar to them. They can be very territorial so it’s important that they have plenty of space.

This is the one fish on the list that are considered reef safe with caution. They are not fully reef safe but if you are careful in choosing your corals, you should be fine. I would avoid zoanthids, mushrooms, meaty LPS.

If you keep your Emperor well-fed, there is a good chance that it won’t bother your corals. I have seen them successfully in full reef tanks, but I also know people who have had problems with them picking at certain corals.

The Lionfish is definitely one of the most unique saltwater fish available. They are not for beginners and can be challenging to keep.

These fish can grow to up to 18” so a large tank is needed for them. Although they might look to be aggressive, they are actually quite peaceful and will get along with other predator type fish.

Lionfish are considered to be reef safe and can be kept in coral tanks. They won’t bother your corals.

One of the biggest issue with these fish is they can not be kept with invertebrates in the tank. They will make a quick snack out of snails, crabs, and shrimp.

Are there any peaceful large reef safe fish?

Although larger saltwater fish are sometimes thought of as aggressive, there are many peaceful large reef safe fish.

Here are some examples on top of the ones mentioned above.

So as you can see there are choices when it comes down to keeping a large saltwater fish in a reef tank. Many large fish are not only reef safe but peaceful as well. Providing you choose your tankmates properly and have an appropriate size tank for them, any of the fish mentioned here can be kept inside a reef tank.

link to Yellow Coris Wrasse Care - Are They Reef Safe?

Overview and Appearance The Yellow Coris wrasse is a small, peaceful fish that works well in community aquariums. It's considered to be relatively easy to care for and can be...

Continue Reading
link to Why Are My Saltwater Fish Breathing Fast?

Aquarium keepers know that the best way to ensure fish stay healthy is by observing them and looking for any changes in appearance or behavior. However, when a change does occur, it can be... 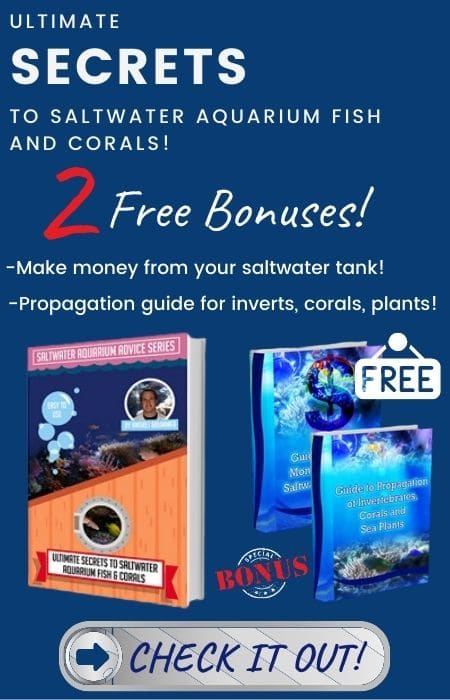