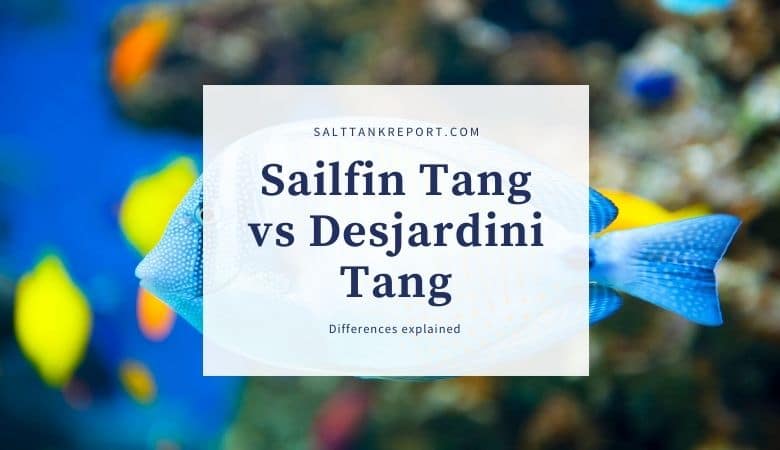 In this article, I will cover a few of the differences between the Sailfin tang and Desjardini tang.

Both of these fish are very popular and although there are many similarities, there are some differences as well.

They often get confused and I have heard of stories where someone purchased what they thought was a Sailfin tang, but it ended up being a Desjardini.

Hopefully, they didn’t pay the higher price and perhaps ended up with a cheap Dejardini tang!

Let’s look at some of the differences between the two fish.

Desjardini tangs are colorful fish with intricate patterning. Their impressive size and beautiful appearance make them popular in home aquariums, but they can also be a somewhat challenging fish to keep.

Native to Africa and Sri Lanka, these fish are best kept by aquarists who are ready to accommodate the fish’s size and semi-aggressive temperament.

The sailfin tang tends to be a bit friendlier than the Desjardini and is just as attractive and interesting. These fish are native to a wide range of waters in the Indian Ocean and South Pacific, including the areas around Japan, Hawaii, and the Great Barrier Reef.

The Sailfin is often easier to find than the Desjardini and, because it’s more readily available, is usually less expensive.

Some of the most beautiful saltwater fish are tangs, and the Desjardini is no exception. This fish features a blue tail fin with lighter spots, a pale body with gold and brown striping and spots, and a pearl gray face.

The body of the fish is quite long, growing up to 16 inches, and a very large dorsal fin gives the fish a tall appearance as well.

Sailfins have dark brown bodies, fading to a lighter brown along the fins. Along the body, there are several bright yellow and white stripes.

Both Sailfin and Desjardini tangs are considered to be semi-aggressive.

The sailfin often gets along well with a variety of other fish, but it can become quite territorial when kept with other tangs.

If a sailfin will be kept with other tangs, introduce all of the fish at the same time so as to mitigate territorial disputes.

Desjardini are also very territorial, so its often best to keep this fish without any other tangs, including other Desjardini.

These fish tend to be relatively peaceful when it comes to other tank mates.

Both Desjardini and sailfins get along well with most other fish, so aquarists can choose from a wide range of possible tank mates.

It’s often best to select peaceful fish that won’t become territorial with the tangs, as tangs can be aggressive when bullied, and because of the sharp spurs on their tail fins, they can cause a good deal of damage.

Tangs also tend to do well in reef tanks and with invertebrates.

Although they may occasionally nip at corals, they are considered to be reef safe.

They also get along well with tank mates such as gobies, which will help to clean the tang’s scales.

Because of their large size, Desjardini fish will require a tank of at least 180 gallons, although larger is better. They prefer a water temperature between 72 and 78 degrees Fahrenheit and a pH between 8.1 and 8.4.

Sailfins require nearly the same tank size and water parameters as Desjardini. The only difference is that they prefer a temperature somewhere between 75 and 82 degrees Fahrenheit.

Both fish require a good deal of space to swim but also prefer aquariums that offer plenty of hiding places, such as rock crevices.

In addition, a tank housing either a sailfin or a Desjardini should be well-aerated.

“Reef aquariums are definitely the pinnacle of the hobby.” ~ Brian K. Vaughan

Desjardini and sailfins are both herbivorous. If the tank has been set up with live rock, algae should grow naturally, and the fish will be able to graze freely on this.

Tangs are well-known as excellent cleaner fish, and they will often rid aquariums of nuisance algae. Desjardini will sometimes even eat bubble algae, which most other fish and invertebrates will ignore.

It can often be difficult to tell the difference between male and female Desjardini and sailfins. Generally, the males of both varieties are bigger than the females, but there are otherwise few differences. Even the size difference is hard to notice in Desjardini fish in particular.

Breeding these fish in captivity is also a challenge. Because they’re so territorial, it can be difficult to keep two together without a very large aquarium.

They generally require a great deal of space to spawn as well, and although breeding in captivity has occurred, it almost always happens in public aquariums that can accommodate the room these fish require.

Sailfins are very hardy fish and, as long as they are provided with a healthy tank environment, are not very susceptible to any particular diseases or illnesses.

It is, however, a good idea to introduce small cleaner fish or shrimp into the aquarium to keep the sailfin’s scales in peak condition.

Desjardini are also quite hardy and rarely become ill. A varied diet, full of different nutrients and vitamins, can help to keep them healthy.

If the fish begins to lose its pigmentation, a boost of vitamin C may need to be added to the diet.

This can be done by providing a higher quality of food, but vitamin C supplements can also be added directly to the aquarium water.

It’s important, for both tang varieties, to keep the water clean and ensure that your water parameters are within limits and there are no harmful spikes.

Neither the Desjardini nor sailfin fish is difficult to find in the aquarium market. However, the sailfin is a slightly more common fish and is, therefore, more often available.

It generally costs around $40, although larger, more mature fish can reach up to $60.

The Desjardini costs a bit more and is often sold for between $80 and $100. Mature fish, however, can cost up to $200. Always buy fish from reputable sources and ensure that the seller knows where the fish came from.

If possible, it’s also a good idea to observe the fish before purchasing in order to make sure that they appear healthy. Also, ask to see them eating prior to purchase.