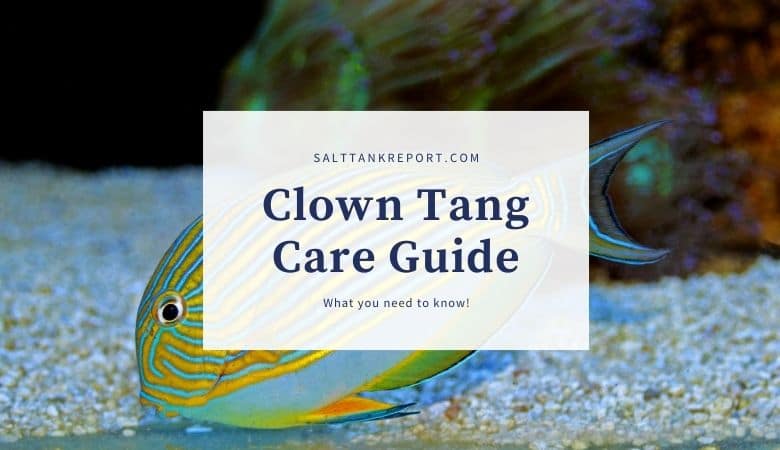 The Clown Tang is one of the most sought after fish in the saltwater hobby. 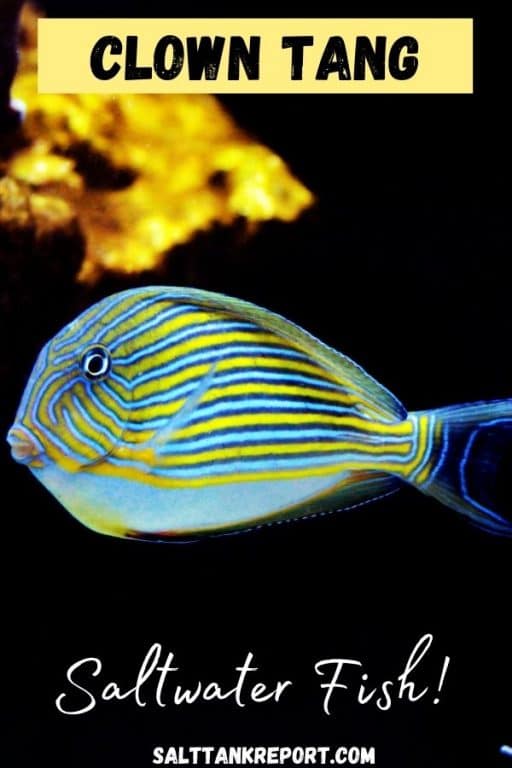 Keeping them can be quite a challenge due to their needs but many people successfully have Clown Tangs in their tank.

They are not a beginner fish and should be kept by experienced hobbyists with larger tanks.

They will add a ton of personality to your tank.

In this Clown Tang care guide, I will show you the specific needs that they require (diet, tank mates, behavior, etc) and many other important facts that will help you care for a Clown Tang properly.

Thanks to their energetic nature and colorful appearance, clown tangs are a very popular saltwater aquarium fish.

However, these tangs can be quite territorial and aggressive, and they grow to an impressive length of about 15 inches.

They can also be finicky about eating, so when it comes to clown tang care, they are a fish best suited to experienced aquarium keepers.

This particular tang has an orange or yellow body, over which are several thin, horizontal blue stripes. These stripes are often accented in black.

The short fins of the fish give it a somewhat round appearance.

These tangs are incredibly active and enjoy swimming quickly around the aquarium.

This makes them entertaining to watch but can sometimes cause stress in tank mates and also necessitates the need for a very large aquarium.

In the wild, adult clowns group together with one dominant male guarding a number of females. They prefer to graze throughout the day, and this holds true in captivity as well.

As young fish, the tang can be relatively friendly, and they are often a good choice for a community aquarium.

However, as they mature, this fish will often become more territorial and more aggressive. They may dart around, chasing, and bullying other fish.

This is particularly true when it comes to other tangs. 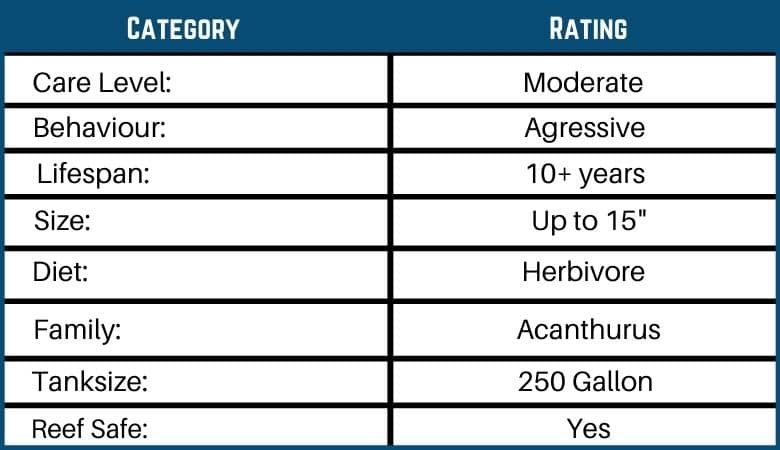 Although the clown tang is territorial and will defend that territory with aggressive behavior, particularly once the fish matures, they can still be a good addition to a community tank.

When choosing tank mates, it’s best to select fish that don’t have a similar body shape or overall appearance. Fish of similar size are also a smart choice.

It’s generally best not to house the clown with any other tangs, as well, but there are a few varieties that should do well together.

Yellow tangs make a good tank mate for the clown because they have a rounder body and large fins, giving them a different, less threatening profile, so aggression is often reduced.

Yellow tangs are, as their name suggests, bright yellow in color, and they grow to about 8 inches long. They’re relatively easy to care for and require the same water parameters as the clown.

Tomini tangs have a more angular, almost angelfish shape when compared to the clown. They are a reddish tan in color with yellow highlights at the edges of their fins.

This fish can be somewhat aggressive but it only grows to about 6 inches long, so it won’t bully clowns.

Because of its smaller size and different appearance, clowns don’t usually see this fish as a threat.

Purple tangs are some of the most eye-catching tangs available, aside from the clown. They have long fins and a dark purplish-blue body. Their tail fins are bright yellow.

These fish grow to about 10 inches in length and enjoy the same large swimming space as clowns.

Offering plenty of hiding places in the aquarium will also give all of the tangs in the aquarium the option to get away from any aggressive behavior and can help to reduce territorial disputes.

The Scopas Tang has a body shape that’s more rectangular and shorter than a clown, so clowns won’t feel as territorial around them.

Scopas tangs grow to about a foot long, so they can hold their own against the large clown if any aggression does occur. 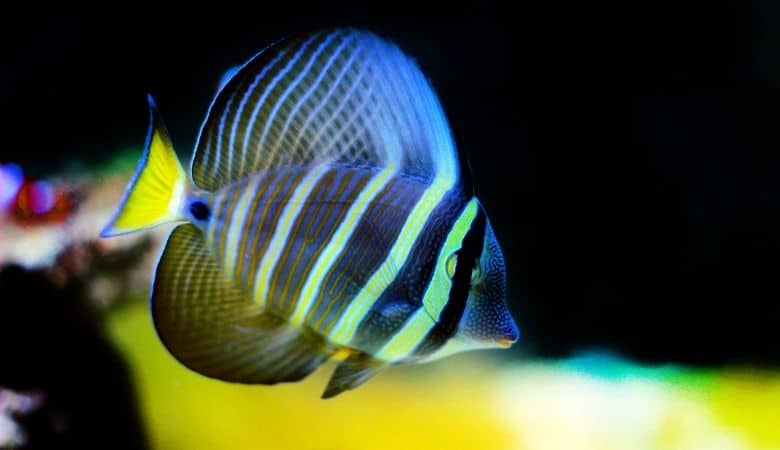 Although sailfin tangs have a body shape similar to a clown, their elongated fins give them an entirely different appearance, which helps to mitigate territorial disputes.

Sailfins, which have yellow bodies and brown stripes, grow to nearly as long as clowns, so they’re unlikely to be bullied by them.

Sailfins tend to be somewhat aggressive towards other sailfins, but they generally get along well with other fish and are often peaceful with other tang varieties, making them a good choice for a community aquarium.

Clowns are native to the Maldives and Fiji. They prefer a warm water temperature, between 72 and 78 degrees Fahrenheit, to mimic their natural environment.

A pH between 8.1 and 8.4 and a specific gravity between 1.020 and 1.025 is also recommended. The water must remain very clean at all times in order for the tang to stay healthy.

These fish love to swim, so a large aquarium will be needed to accommodate both their active temperament and size.

It’s important to add a good amount of live rock to an aquarium housing a clown.

These fish spend most of their day grazing, and the live rock will give them an opportunity to do so in a natural, familiar way.

These fish are reef compatible, but watch out for any nipping or otherwise aggressive behavior towards corals.

One of the most challenging things about keeping these particular tangs is encouraging them to eat.

Since they are caught in the wild, they are often confused about accepting flake or pellet foods, and they may be picky when it comes to other food items.

Clown Tangs are herbivorous, so offering plenty of plant materials for them to graze on naturally is an excellent start.

A piece of seaweed can be clipped near or under the live rock.

This is especially important as the fish becomes acclimated, but leaving seaweed in the aquarium at all times for the clown to nibble at can make for a much healthier fish overall.

As the tang becomes more used to accepting different foods, vegetable-based commercial foods can be offered about three times a week.

Brine shrimp can also be offered from time to time to ensure that the fish is receiving all of the nutrients it needs to thrive.

In the wild, these tangs pair off from within their larger group during spawning, and they then scatter their eggs into the water column.

Housing a group or pair of tangs in a home aquarium would require a great deal of space, and the eggs cannot be scattered as well in such a confined area.

Male and female clowns also look nearly identical to each other, so selecting a pair or harem group can be quite a challenge.

Because of these issues, these tangs have not been known to breed in the aquarium, and the tangs that are sold for home aquariums have all been caught in the wild.

While these tangs are not prone to any particular diseases, they often carry parasites or infections with them.

After purchasing a clown, it’s always best to quarantine the fish for a period of time to ensure that it’s healthy.

This is also a good opportunity to clear up any fungal, bacterial, or parasite problems.

When purchasing one of these fish, make sure that it seems healthy and comes from a reputable seller.

It’s also always a good idea to choose a fish that has already become familiar with nibbling at seaweed in the aquarium.

This makes acclimating the fish much less stressful and more successful.

Should You Add a Clown Tang to Your Aquarium?

Clown tang care can be relatively difficult, and the energetic, somewhat aggressive nature of the adult fish, paired with its substantial size, means that these fish are best suited to more experienced aquarists with space for a large setup.

However, this tang is also vibrantly colored, and, once acclimated properly, can make a fascinating and beautiful addition to a community tank.