When it comes to protein skimmers, Nyos is a big name in the industry. But it’s not like they own the protein skimmer market. There are many other reputable name skimmers available at a fraction of the price.

And that begs the question, are Nyos protein skimmers any better than the other brands on the market today? Is Nyos really worth their high price?

When compared to other brands like Reef Octopus, Bubble Magus, Simplicity, Red Sea, and Ice Cap, it’s difficult to justify the high price tag of a Nyos. Comparing the features, efficiency, size, and durability, many other brands perform just as well as a Nyos and will normally come with a much cheaper price tag.

I won’t argue that Nyos makes great skimmers. They certainly do. But so do the other brands. You will hear many different opinions, some people will say Nyos is worth the extra price tag. I’m not one of them.

So let’s take a look at the criteria for some of the other brands to see how they compare to the Nyos Quantum 120 protein skimmer.

I looked at 5 different protein skimmers to compare the features of each.

Hopefully, this information will help you decide if the Nyos is the right buy for you.

As you can see, the price of the Nyos can be more than double other skimmers that are suited for the same sized tank. Is it worth the extra money to you? I know it’s not comparing apples to apples, but the Reef Octopus 110 INT is a great skimmer and has been trusted for years. Is the Nyos worth 2 times the price?

With some of the other Nyos models, such as the Quantum 220, you will pay even more than comparable models.

When it comes to features, the Nyos protein skimmer has the same features as the other brands. It may come with additional features, but the main items you look for in a protein skimmer are included with the lower cost skimmers as well.

The Nyos Quantum 120 is built with all solid cast acrylic and is definitely durable and built to last. It ticks all the boxes for important features and then some. Let’s look at some other statistics to compare. 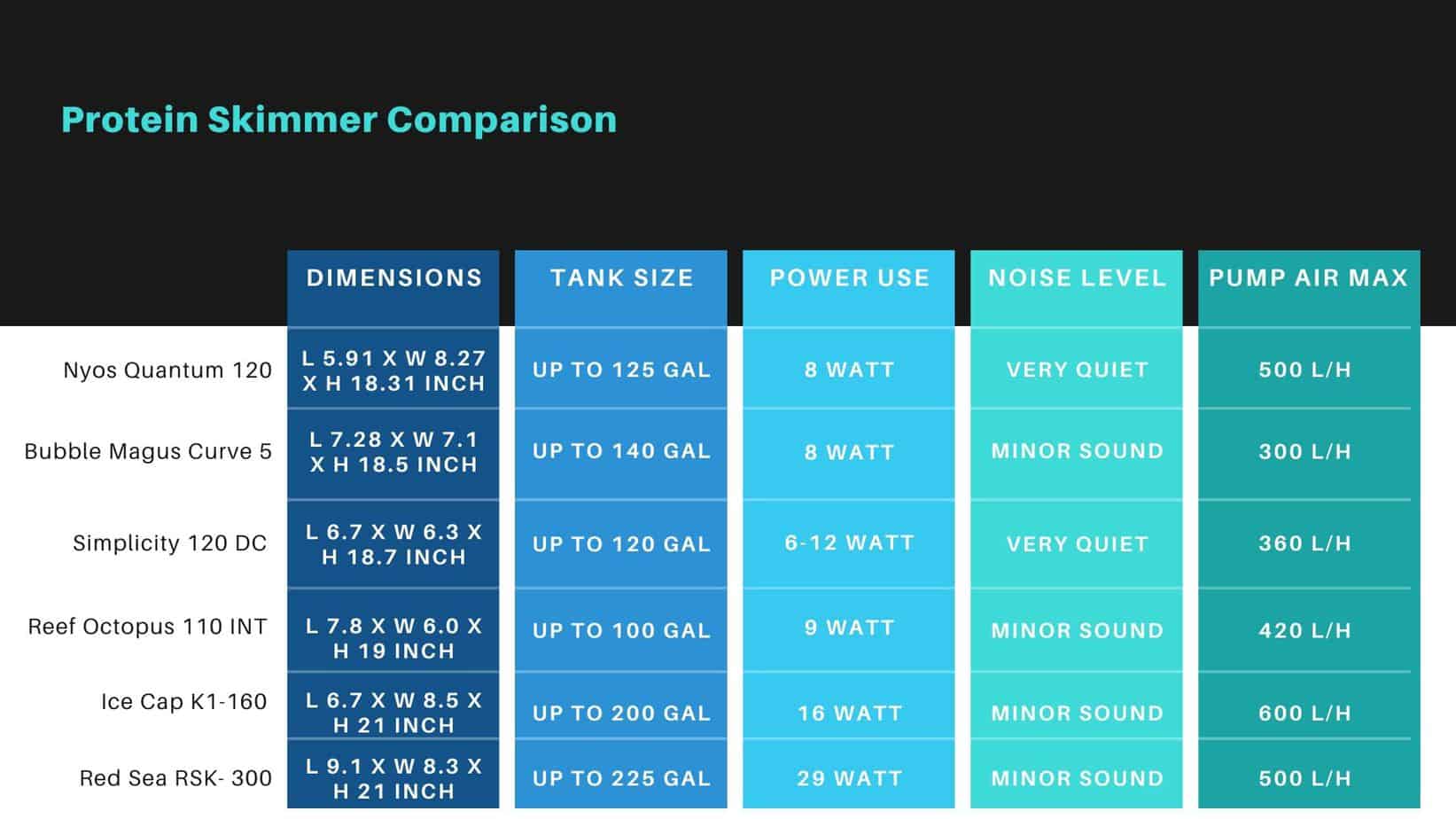 The Nyos Quantum 120 skimmer has dimensions of 5.91 x 8.27 x 18.31 inches. An important thing to note is that this skimmer is slightly shorter than the others. But not by much. Taller skimmers can be difficult to work with if you have a shorter stand. You may not have a lot of room between the bottom of the tank and the top of the skimmer that sits in your sump.

So removing the skimmer cup for cleaning can be a hassle if you have a tall skimmer. The Nyos is only 1.7″ shorter than the largest skimmer on the list and just about the same height as the rest. So just looking at the size of the skimmers, is the Nyos worth the extra money to you?

The Nyos 120 skimmer is rated for up to 125-gallon tanks. Keep in mind that this is the maximum tank size that the manufacturer recommends under a light bioload. Most people tend to use this skimmer on tanks that are around 75 gallons.

Compare that to the Ice Cap K1-160 protein skimmer which is rated for tanks up to 200 gallons. The difference in price will be around $150. For me personally, I would choose to save the extra money and have a skimmer that will allow me to upgrade tank sizes without buying another skimmer down the road. That can be a huge saving. Not only are you saving money upfront on the cost of the skimmer, but you won’t need to buy another skimmer if you upgrade.

So if you are just looking at the tank size rating, is the Nyos 120 worth it to you?

When choosing a protein skimmer for your tank, it’s important to consider it’s power usage. A skimmer that not as efficient as others will cost you more money to operate it. If a skimmer is considerably more efficient than a competitor, it may be worth it to pay the extra upfront cost as you will save more in the long run.

This is where I believe the Nyos Quantum 120 beats out the competition. It uses the same amount of power as the Bubble Magus Curve 5 and just slightly less than the Reef Octopus 110 INT, but considerably less than the Red Sea RSK-300. Yes, I know the Red Sea skimmer is larger and rated for a larger tank, but if you were considering buying a skimmer for the same sized tank, say 100 gallons, the Nyos is more efficient.

The Nyos Quantum 1 pump has a power consumption of 8 watts, which would be 70Kwh per year, with a cost of $8.41 if the kWh price stayed at 0.12 cents. The national average power cost is $0.12/kWh, so looking at a per-month cost:

This would result in a very cheap price of .70 cents per month. 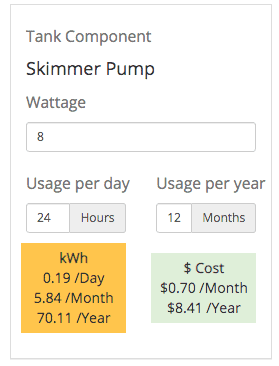 This would result in a price of $2.54 cents per month. 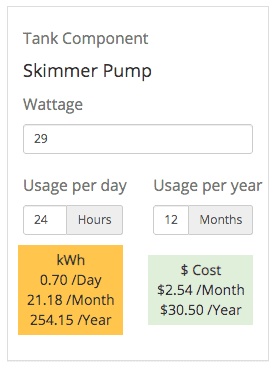 So only a difference of about $22 for an entire year to operate the Red Sea skimmer versus the Nyos. If you look at another comparison, using the Simplicity 120 DC which uses 12 watts, the difference per year is only around $4. 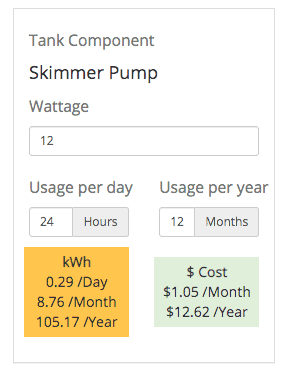 So there is no question that the Nyos Quantum 120 is more efficient than many other skimmers on the market. But is the higher price tag of the skimmer worth it to you to only save a few dollars per year?

If you would like to see more aquarium electricity costs calculators, check out Marine Depot here.

Other factors to consider

When choosing a protein skimmer there are a few other things that you may want to consider. Reliability and durability are both important. It can be worth the extra money to buy a skimmer that will be long-lasting and hassle-free. I would avoid buying any of the cheaper no-name brands.

Any of the skimmers mentioned here are considered to be both durable and long-lasting. All of the Nyos skimmers have a very modern looking design, are built to be a solid skimmer and most people who use them don’t have much to complain about. Except for the price.

Although they have a really fancy design and look cool, they will only look that way in the box. Once you put it to use, it doesn’t take long for them to become dirty and look just like the other skimmers.

Noise is another big factor when deciding on a skimmer to purchase. Nobody likes a loud skimmer. The Nyos skimmers are one of the quietest skimmers on the market. They are pretty much silent. I would give them the advantage over the other skimmers when it comes down to sound.

The other skimmers I mention are quiet as well. Perhaps not as quiet as the Nyos but still overall they are hard to hear. The Simplicity 120 DC is pretty much silent as well. I ran this skimmer for over a year and was very impressed with how quiet it is.

So once again I ask you. Looking at these other factors to consider, is the Nyos 120 skimmer worth it to you?

The only beef I have with the Nyos protein skimmers is the price of them. They are a great skimmer overall and if you decide to purchase one, I believe that you will be happy with it. Protein skimmers are designed to help remove organic waste before they have a chance to break down in your tank releasing nitrogen compounds. They will also help reduce Nitrate levels which is crucial for reef tank keepers.

All protein skimmers will provide this important function. Some are better than others. It’s up to you to determine if paying the extra price is worth it.

Some people believe it is. Are you one of them?

link to Best Food For Clownfish -They Go Crazy Over This Stuff!

In this article, I will show you the best foods available to feed your Clownfish. Clownfish are one of the most commonly kept fish in the saltwater aquarium hobby.  In order to keep them...

Continue Reading
link to What Eats Bristle Worms? - Try These For Best Results

In this article, I will show you some of the commonly kept saltwater fish that are known to eat Bristle worms. There are literally thousands of different species of bristle worms. Some of them...