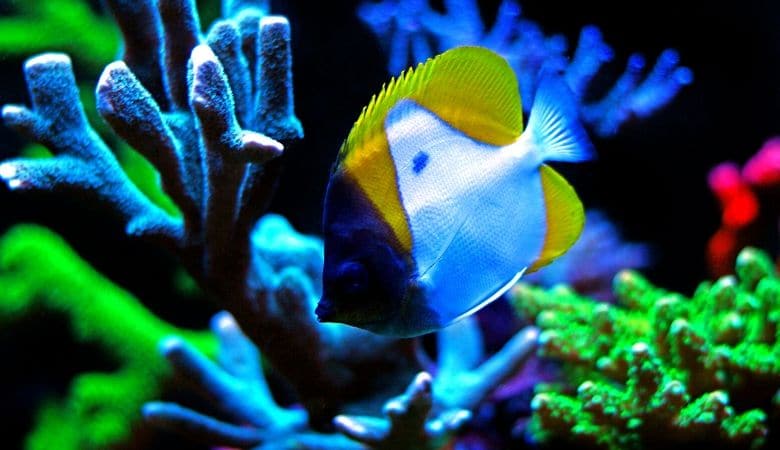 Butterflyfish are some of the most stunning, visually appealing saltwater fish available. However, many varieties will nibble at corals and anemones, which can make it very difficult to keep these fish in a reef aquarium. 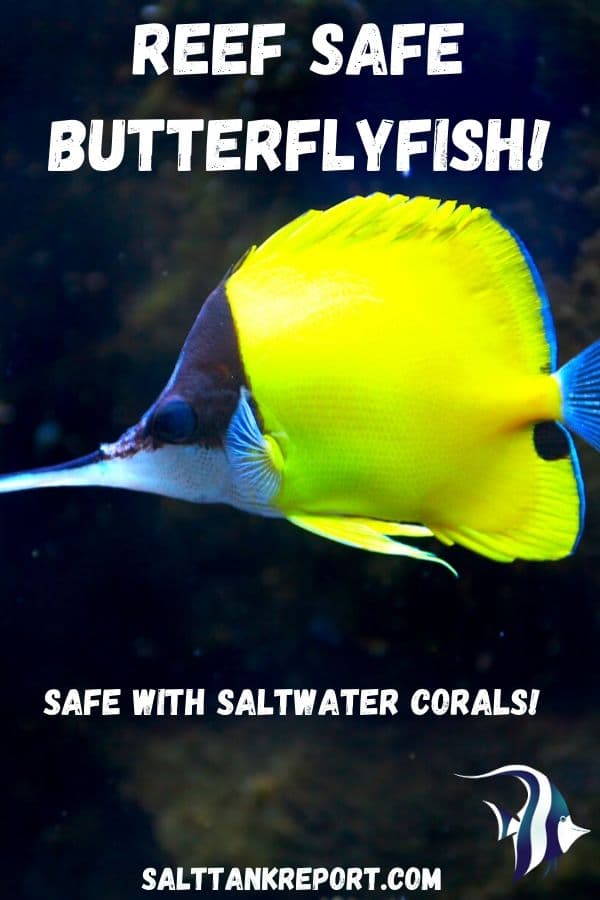 Luckily, there are some reef safe butterflyfish, but when adding one of these fish to a reef aquarium, it’s important to select a variety that isn’t interested in the types of coral you prefer to keep.

Butterflyfish are relatively large fish, growing to between five and 12 inches long, depending on the variety. Most are peaceful and do well in community tanks. Some varieties prefer to school, while others should only be kept in tanks that don’t feature other butterflyfish.

An aquarium of between 75 and 150 gallons will be needed to comfortably house butterflyfish. In addition, butterflyfish can sometimes be quite shy, so it’s important to provide a habitat with plenty of hiding places and crevices.

These fish prefer water temperatures ranging between 72 and 78 degrees Fahrenheit, but specific needs vary from species to species.

Butterflyfish, due to their shy nature, can sometimes be tricky to feed. Some varieties feed solely from corals, while others are omnivorous.

Offering the fish a wide variety of foods, such as flake foods, plankton, and brine shrimp, and feeding them several times a day will not only keep the fish healthy but will also reduce the risk of corals or invertebrates being eaten out of hunger.

Signs That Your Butterflyfish Might Be Disturbing Your Corals

Although some butterflyfish varieties are considered to be reef safe, temperament varies from fish to fish, and some may be more prone to nibbling at corals than others. Recognizing the signs of coral nibbling can help to reduce the damage and will allow you to either increase your feeding schedule or move the fish or coral to a separate aquarium in order to curb the problem. 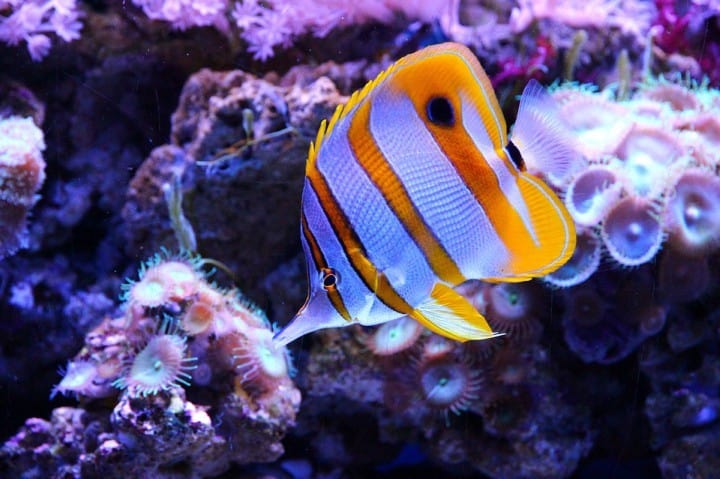 One of the most obvious signs of coral-eating is a fish who consistently returns to pick at certain corals. Carefully observing your fish can often tell you about their habits and may help you adjust your feeding schedule.

Observing the corals themselves can also tell you whether fish have been bothering them. Often, if a coral feels stressed or threatened, it will stop opening or extending its polyps. Stress in corals is often caused by fish nipping at them.

Copperband butterflyfish sport beautiful white bodies with narrow, vertical copper bands. Like all butterflyfish, the Copperband has a spade-shaped body and long nose, perfect for eating from rock crevices. They also have a dark eyespot at the top of their bright yellow dorsal fin.

Copperbands are considered to be reef safe butterflyfish, and many aquarists find that they don’t disturb their corals at all. Other aquarium keepers have discovered that their Copperbands will readily eat pesky aiptasia anemones while leaving desirable corals and anemones alone.

For the most part, whether a Copperband will pick at corals or not depends on the individual. It can usually be said that they only nip at Acanthastrea corals. However, some fish may also pick at bubble corals or invertebrates such as clams.

Copperband butterflyfish grow to about eight inches in length and will require an aquarium of 125 gallons or more. They are considered difficult to keep and, although they are peaceful, should not be housed with other butterflyfish.

Pearlscale butterflyfish are considered to be safe when kept with most soft and hard corals. They also tend to leave anemones alone, although some aquarium keepers have found that their particular fish will occasionally nip at anemones as well.

In addition, they seem to have little interest in zoanthids. However, they have been known to nip at polyps, sea fans, bristle worms, and invertebrates such as crabs and shrimp.

Pearlscale butterflyfish are omnivorous, but they’re mostly carnivores, which is perhaps why many of them show little interest in eating corals.

Offering flake foods in addition to frozen or freeze-dried meaty foods, such as brine shrimp, can ensure that they feel full throughout the day, which will decrease the likeliness of attacks on coral. 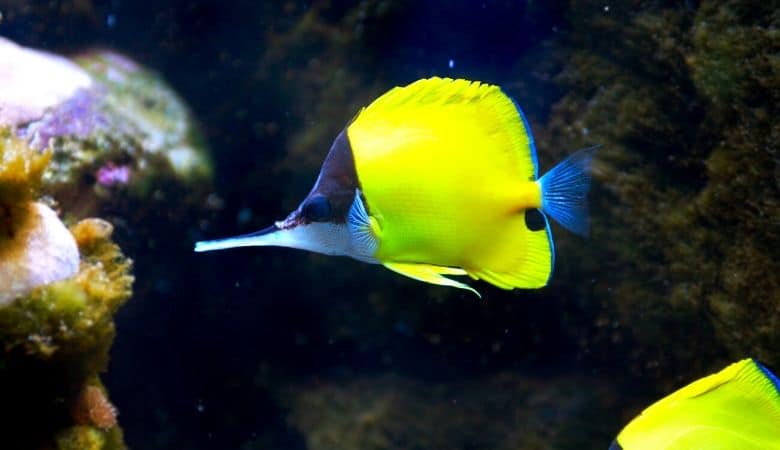 Longnose butterflyfish are some of the most striking and easily recognizable butterflyfish available. They have a bright yellow body with a spiked dorsal fin, while their heads are solid black on top and solid white on the bottom. These fish grow to about nine inches and will require a tank of at least 125 gallons.

Longnose butterflyfish are mainly carnivorous and therefore generally have little interest in eating corals, so they’re often considered to be reef safe. However, they are opportunistic feeders, and although they tend to leave most corals alone, they will nip at soft corals and the polyps of stony corals.

If the longnose butterflyfish only nips at the corals occasionally, this usually doesn’t cause too much of an issue and won’t generally damage the coral itself.

However, if the fish seems to have developed a taste for the coral, a change within the aquarium may need to be made. These fish will also nibble on invertebrates, so although they can be kept in reef tanks, it’s best to monitor them closely. 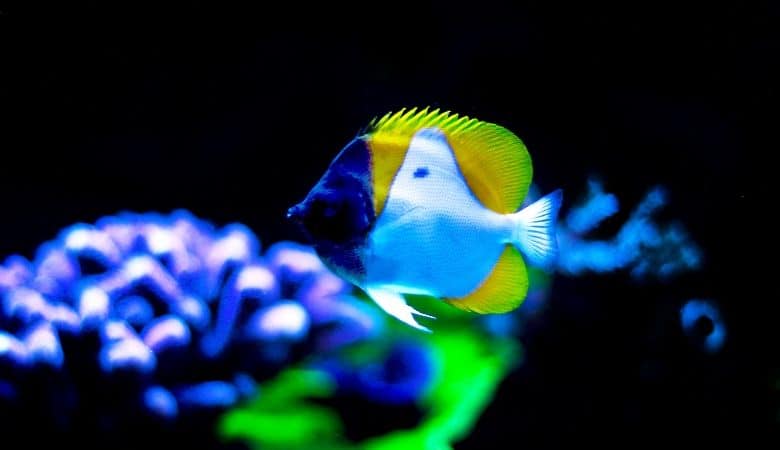 The yellow pyramid butterflyfish gets its name from a white pyramid coloration, directly in the center of its body, surrounded by yellow scales. The tail is also white, but the head is a much darker, nearly black color. These fish grow to about seven inches long and require an aquarium of at least 125 gallons. They are largely peaceful and are considered to be some of the easiest butterflyfish to care for.

Yellow pyramid butterflyfish are omnivores, which means that they will eat corals if given the opportunity. However, when they are fed well, they tend to leave most corals and anemones alone. They will occasionally pick at soft corals, so care should be taken when placing these fish in a tank with them.

If the fish is introduced to the tank as a juvenile and becomes used to eating prepared, frozen, or freeze-dried foods, it’s much less likely to turn to corals as a food source later on.