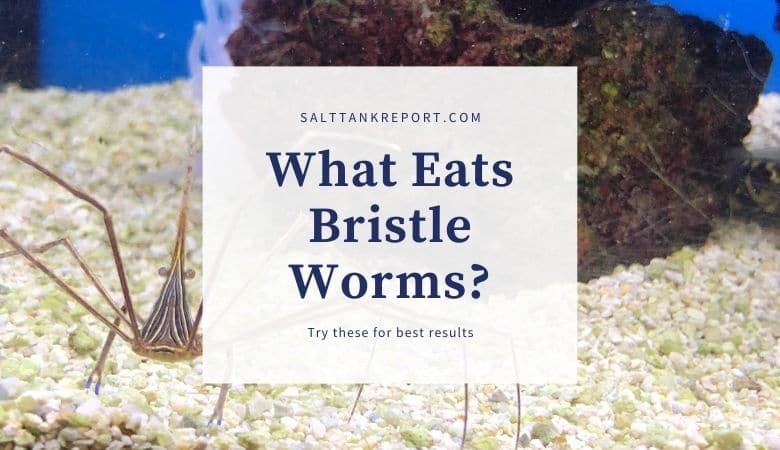 In this article, I will show you some of the commonly kept saltwater fish that are known to eat Bristle worms. 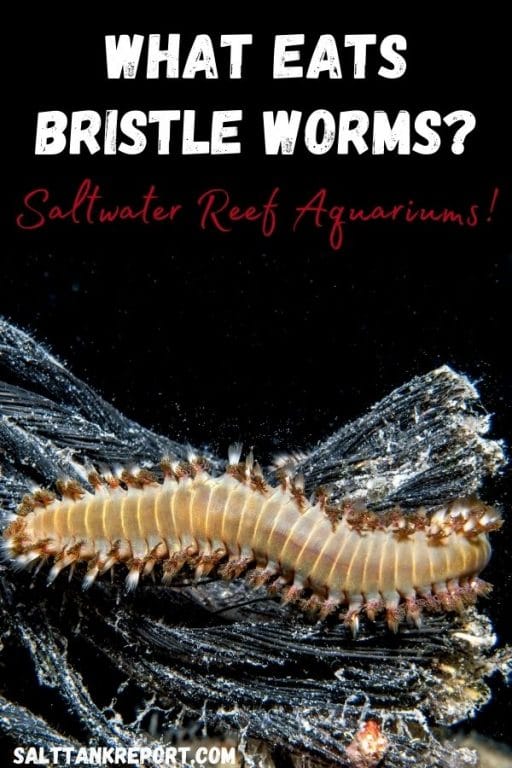 There are literally thousands of different species of bristle worms. Some of them can be beneficial to have in your tank and others are not.

But don’t think of bristle worms as being the destroyer of all saltwater tanks. They have a bad reputation of being harmful and some people want them out as soon as they show up.

Most times bristle worms will show up out of nowhere, they tend to be brought into your tank from live rocks that are added to the tank.

They can grow up to 24” and are great cleaners. They will eat pretty much anything including all detritus, uneaten foods, and anything that dies in the tank.

If you don’t want to have bristle worms in your tank, there are a few different fish and invertebrates that will eat them.

You can use the following to control the population of bristle worms. 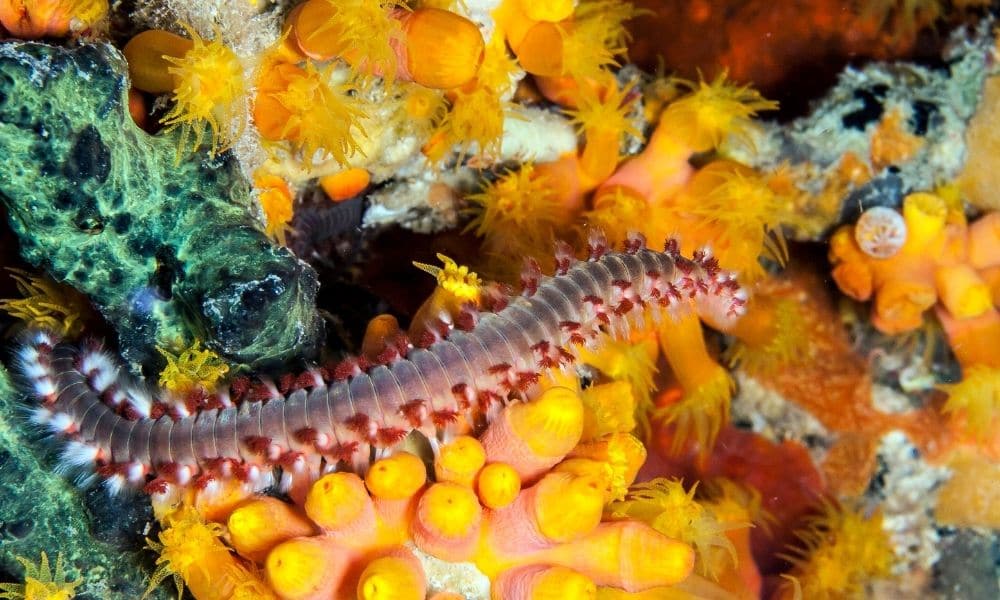 The Coral Banded shrimp is very popular to see in saltwater tanks and has unique white and red stripes across its body. They will grow to about 3” but if you count the antennae, they can reach 6”. They are known to search around the tank scavenging for food. They will also eat pellets and flakes once used to them. The Coral Banded Shrimp are reef safe and are known to eat bristle worms.

There are a few different saltwater wrasses that are known to eat bristle worms. The Six line wrasse is the most common. Yellow Coris and Melanurus are other wrasses that will eat them but your best bet is to use the Six Line wrasse.

The Six Line is a very common wrasse and can be aggressive. They are fast-moving fish and are reef safe. They won’t bother invertebrates in your tank and they are known to eat bristle worms. They will also take care of other pests in your tank which makes them a welcomed addition to most tanks.

The Arrow crab is also called a Spider crab. These are very unique and have long legs. They can grow to different sizes but some can reach 6-10”. The Arrow crab is a hardy invertebrate that can eat bristle worms if they are small enough. They tend to leave large ones alone. But be careful if you are adding these to a tank-mixed with a Coral Banded shrimp. They do not get along and it will not end well for one of them. Arrow crabs are also known to attack very small and slow-moving fish.

These fish have a very unique body shape with red and white horizontal and vertical stripes. The Longnose hawkfish is really interesting to watch as they love to perch on corals that it can camouflage into. They will only grow to about 3” and are considered to be semi-aggressive. They are reef safe and can eat smaller bristle worms.

For the most part, bristle worms are not harmful to your saltwater tank. They can actually be quite beneficial as they do a great job cleaning up the tank. With so many different types of bristle worms, it’s difficult to research the thousands of them to see if they are safe or not. But the most commonly seen bristle worm that most people get in their tank is not bad for the tank.

The one type of bristle worm that is not good to have is the Fireworm. These worms are carnivores and will attack fish, corals, and invertebrates. They are destructive and will wreak havoc in your tank. They need to be removed. The best way to determine if you have a Fireworm and not a regular bristle worm is to look at its coloring. The Fireworm will have bristles with a red-colored base. They also have brown, yellow, red gill filaments along its body.

What eats bristle worms and is reef safe?

The great thing about keeping any of the fish or invertebrates mentioned here is that they are all reef safe and eat bristle worms.

Bristle worm trap kits are available if you want to try this removal method or don’t have any bristle worm-eating fish.

They are basically a plastic container with a bait chamber and plastic rods. They are designed so the bristle worms are attracted to the bait, they can enter the trap but can’t get out. Some trap kits can hold several large worms. They work great and can be purchased or there are plenty of DIY options available online. This is a good bristle worm trap kit on Amazon.

If you have ever been stung by a bristle worm then you know how painful it can be. If you know that these worms are in your tank, always wear gloves if your hands are in the tank. If you need to move rocks around, be very careful as a bristle worm sting is not pleasant. It feels like there are thousands of microscopic shards of glass in your skin. It will make your skin very itchy and it’s difficult to remove the bristles. This is not always the case, but it’s best to be on the safe side and protect your hands from being stung. If you are stung, you should seek medical advice just to be safe.

Yes, it is possible for a bristle worm to eat fish. As mentioned, the Fireworm is a carnivore and is known to attack small fish usually when sleeping. Other bristle worms usually won’t bother fish.

If you are looking to control the bristle worm population in your tank, there are some great options. Any of the mentioned fish here will help. If you plan to do a manual removal, you can use a trap kit. But be very careful not to get stung by a bristle worm as it can be a very unpleasant experience. 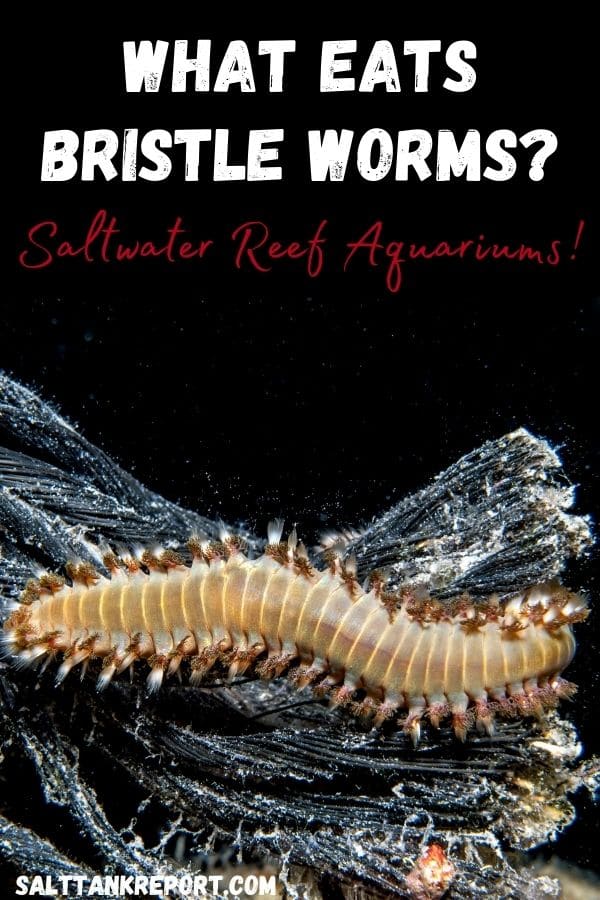