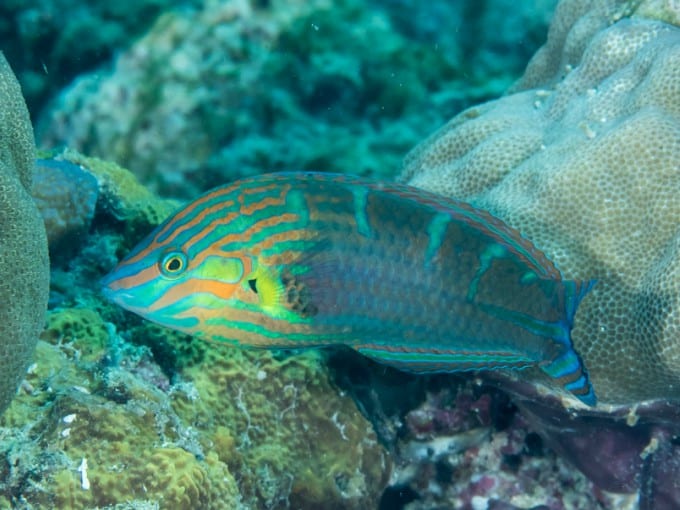 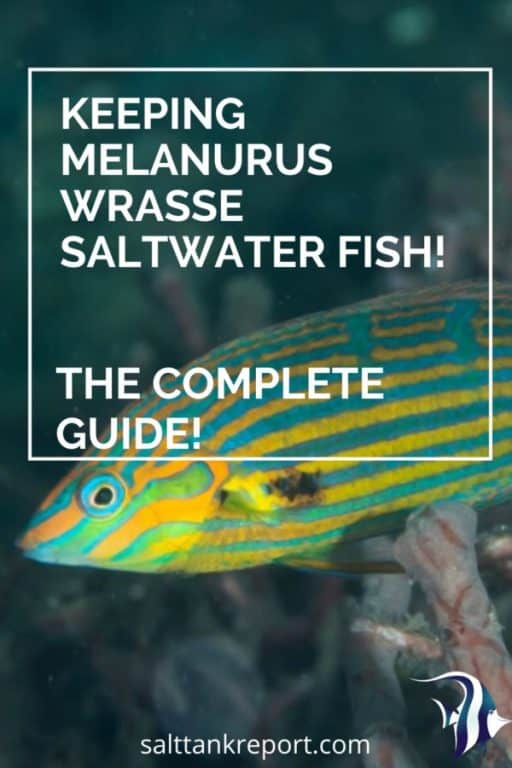 The Melanurus wrasse, also known as the tail spot wrasse or Hoeven’s wrasse, is a popular aquarium fish thanks to its peaceful nature, striking colors, and the way the fish eats a variety of harmful aquarium parasites.

In addition, Melanurus wrasse care is considered to be quite easy, and these docile fish often adjust well to many different aquarium setups.

Melanurus wrasse males are often a bit flashier than the females. These fish are generally a bright blue-green color as adults. As young fish, the Melanurus wrasse looks a bit more gray. Both male and female Melanurus wrasses have bright yellow, orange, or pink lines that run down the sides. The females also sport the tail spots that give the fish its name. The fish grow to about five inches in length and can live for around four years. 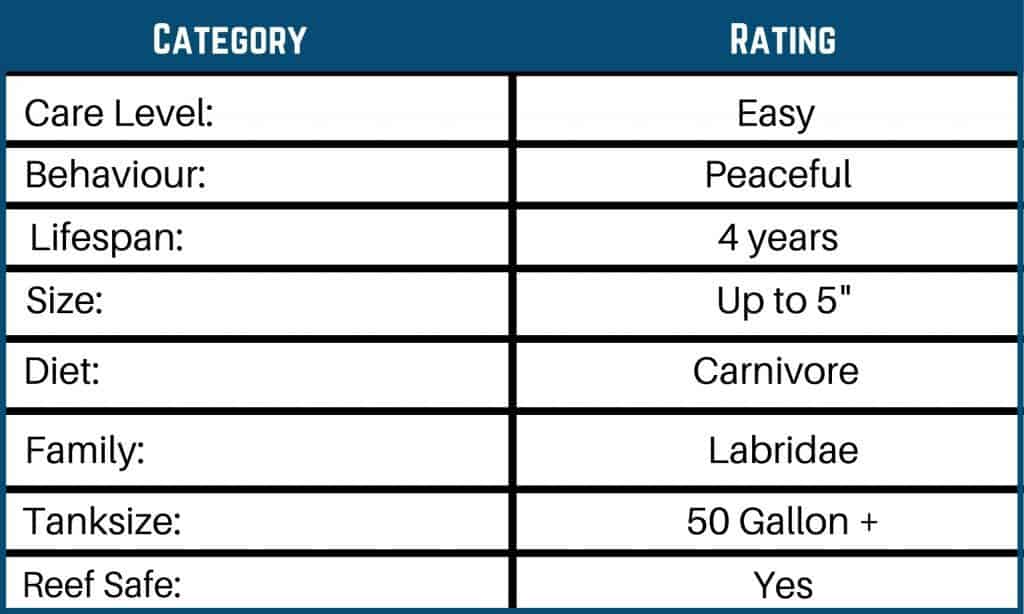 Melanurus wrasses are considered to be a peaceful fish, and they can often be added easily even to established aquariums. They get along well with other members of their own species as well as other gentle tank mates. However, these are hunting fish, so they can occasionally become territorial. This is particularly common among males of the species, and this tendency to be territorial may increase as the fish ages. For this reason, aquarists often recommend keeping only one Melanurus wrasse per aquarium.

It’s also important not to keep a Melanurus wrasse with any other fish that eat small crustaceans. Two or more fish competing for all the copepods in a tank can quickly deplete the crustacean population and may cause problems for the aquarium’s ecosystem.

Young Melanurus wrasses can be kept in a 50-gallon aquarium, but aquariums of 100 or 125 gallons are ideal for adult fish. These fish also enjoy deeper water, so a tank that’s taller than it is wide is often a good choice. In addition, these fish are known to be excellent jumpers, and they may accidentally jump out. A lid that fits tightly and has no gaps is essential to prevent this from happening.

Melanurus wrasses bury themselves in sand at night in order to feel safe, so it’s crucial that a sand substrate is provided. This sand should be coarse and deep enough for the wrasse to completely cover itself if it wants to. These fish are considered to be reef safe, but it’s important to remember that they may eat smaller copepods, which may include shrimp, snails, or other crustaceans keepers have purposefully added to the aquarium.

To provide the best Melanurus wrasse care, aquarium keepers should also ensure that the water temperature remains between 72 and 78 degrees Fahrenheit. 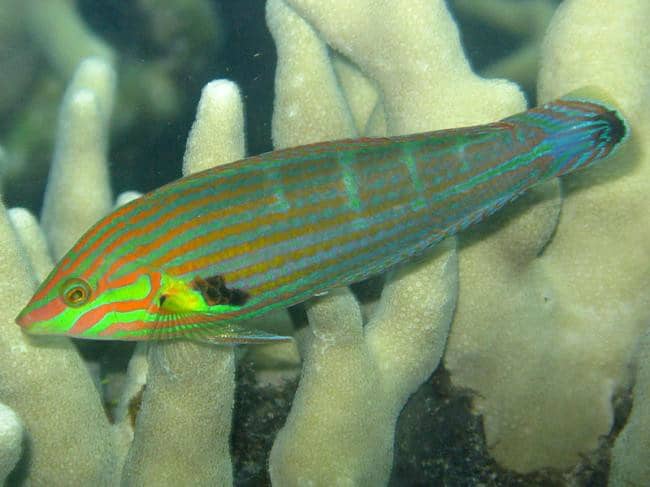 Melanurus wrasses are carnivores, and they will eat a variety of aquarium pests, including fireworms, snails, and flatworms. However, these fish should not need to exist on scavenging alone but should be fed a steady diet of meaty foods, such as shrimp, clams, or krill. These fish will also eat pellet or flake foods, but fresher foods cut into larger chunks mimic the wrasse’s natural habits more closely and are often more appealing to the fish. Providing a variety of foods will also ensure that the fish is receiving the correct nutrients and may even enhance the fish’s colors.

Ensuring that the Melanurus wrasse is well-fed will also slow down the fish’s tendency to eat beneficial aquarium inhabitants, such as shrimp. However, larger wrasses may still occasionally eat beneficial shrimp or snails, so it’s important to consider this before adding a wrasse to your habitat.

It’s easy to tell the difference between male and female Melanurus wrasses, as the male lacks the tail spots of the female. All Melanurus wrasses start life as females and then change to male if the need arises. This often happens if there are no other males in the aquarium, and many keepers find that all of their Melanurus wrasses eventually switch to male.

However, even when a male and female pair of these fish are kept together, breeding Melanurus wrasses in the home aquarium is rare and can be somewhat challenging. Although these fish may spawn readily in the aquarium, the young fry simply cannot survive in a captive habitat.

Melanurus wrasses are known as hardy fish and are not generally susceptible to any particular diseases. However, because these fish are not captive-bred, they can potentially harbor viruses or bacteria when they’re first purchased. It’s important to quarantine a new wrasse in its own, smaller aquarium for a week or two before adding it to a community aquarium in order to check for any signs of illness. 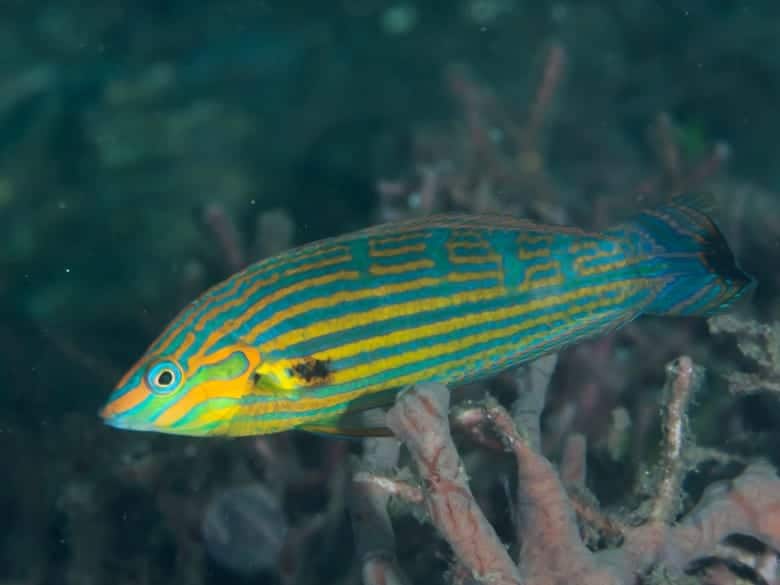 Young Melanurus wrasses generally sell for between $40 and $50. Females are often less expensive than males, as are juvenile fish. Aquarium keepers who are looking for larger, more mature fish or for males can expect to spend between $50 and $80 for each fish. Keepers who are looking for a more brightly colored male fish may want to purchase a healthy juvenile, as it will be less expensive and will almost always transition to male when it matures.

Should You Add a Melanurus Wrasse to Your Aquarium

The Melanurus wrasse is beautiful, energetic and playful, and fun to watch. This, combined with its habit of eating annoying and potentially harmful aquarium pests, makes it an excellent addition to most tanks. In addition, as long as these fish are kept with other peaceful fish and are fed frequently, they are hardy, quite easy to care for, and won’t cause problems with their tank mates.

The Melanurus wrasse is an excellent choice for everyone from beginner to experienced aquarium keepers who are looking to add a vibrant, helpful fish to their setup.