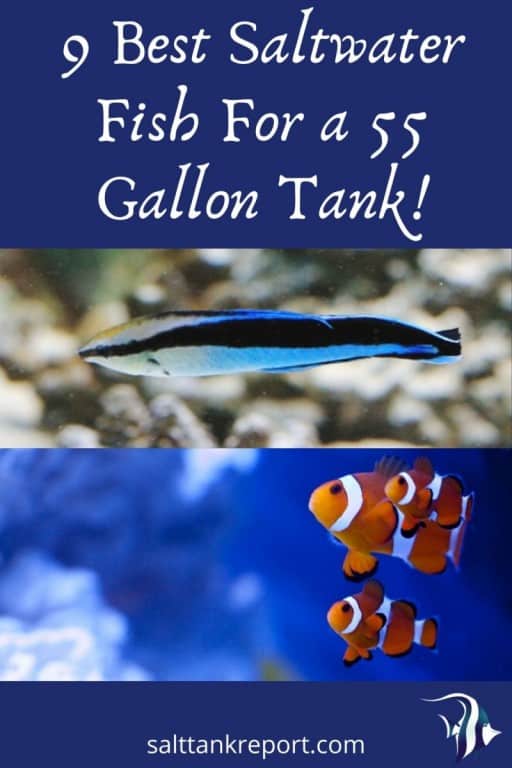 One of the most commonly used aquarium size in the saltwater hobby is a 55 gallon. It’s been popular for many years for a few reasons. The standard 55-gallon tank is a 4-foot aquarium that is not too big, but not so small that you are restricted heavily in the types of fish you can have.

When choosing the best saltwater fish for a 55-gallon tank, it’s important to not only look at their size but their behavior patterns and tankmates as well.

A standard 4 foot, 55-gallon aquarium provides plenty of swimming space for small to medium-sized fish. Of course larger fish will need a larger tank, but the 55-gallon tank is a great choice for many hobbyists and you will have plenty of fish options to choose from.

This article will show you 9 best saltwater fish perfect for 55-gallon saltwater aquariums.

The Coral beauty angelfish is an attractive addition to a saltwater aquarium thanks to its bright orange, yellow, and red body and brilliant blue fins. This fish, which comes from the Great Barrier Reef of Australia, is considered to be easy to care for and is also quite hardy. Coral beauties are omnivorous and enjoy a variety of food, including spirulina, shrimp, marine algae, and other angelfish flake or pellet foods.

The coral beauty is small, only growing to about four inches in length, which makes one of the best saltwater fish for a 55-gallon tank. Angelfish can often be aggressive with other fish of their own kind but as long as they are fed well they will get along with other aquarium inhabitants, including invertebrates and corals.

The Bangaii cardinal is one of the most unusual and pretty saltwater fish available. These fish have long, angular fins and sport black stripes and white spots over their iridescent silver bodies. Although they were once collected from the wild, these fish are easily bred in captivity and healthy examples can now be easily purchased from reputable breeders.

Bangaii cardinals only grow to about three inches long and only require about 30 gallons of space. A 55-gallon aquarium is a great choice for these fish as they can be kept in small groups when offered more swimming area. This also allows for plenty of space for rocks that can be formed into hiding places for these slow swimming fish to rest in.

Blue/Green Chromis are tiny, bright fish that add a pop of personality and color to any aquarium. With their iridescent, pale blue and green colors, these fish stand out, even in larger aquariums. They are also easy to care for and can live for up to 15 years.

In a 55 gallon aquarium, a group of between three to seven Blue/Green Chromis can be kept together. These fish are known to be quite peaceful and get along well not only with members of their own species but also with other fish and invertebrates. They also tend to ignore corals, which makes them a good choice for reef aquariums.

Clownfish, which are available in a variety of colors and patterns, are perhaps some of the most popular saltwater aquarium fish. The white and orange banded version is usually the most sought-after, but these fish can be found in brown, white, yellow, red, and even pink, with bands, spots, or blotches of color. In addition to their attractive appearance, these fish are incedingly smart and often learn to recognize their owners.

Clownfish are not only excellent fish for beginner saltwater enthusiasts, but they require only a small amount of space. Clownfish get along with a wide variety of peaceful fish and can also be kept in reef tanks. Although some clownfish appreciate having an anemone to bond to, in a peaceful aquarium, many never feel the need.

The Royal gramma basslet, which only grows to about three inches long, is a brilliant mix of colors. The front half of the fish ranges from bright violet to a deeper purple, while the other half is a vivid yellow. The colors blend in the center of the fish and there is generally a pattern of small spots there. A black spot also decorates the front of the dorsal fin. In addition, these fish are hardy and easy to care for.

Royal gramma basslets are slow swimmers and prefer to have plenty of hiding places. They are somewhat aggressive towards members of their own kind, but in a 55-gallon aquarium, there is enough space to keep a pair.

Mandarin Goby fish, which are available in several varieties, are small, incredibly colorful fish with bold patterning and large, full fins. These fish are generally peaceful and can be kept with other gentle fish. Mandarins require only a small amount of space in order to thrive, so they are definitely one of the best saltwater fish for a 55-gallon tank.

Mandarin fish are best for experienced saltwater aquarium keepers, as they can sometimes be difficult to feed. Mandarins prefer to eat live copepods, which grow on live rock, but this means that the mandarin’s diet is often limited in both quality and quantity. However, most mandarins can be trained to accept either frozen shrimp or more easily cultivated live brine shrimp, which makes their care much simpler.

Flame angelfish can be aggressive towards other angelfish and may nip at corals and sponges. However, they adapt well to living in aquariums and only need a small amount of space, making a 55-gallon tank a good choice.

Purple firefish are long, narrow fish that grow to between three and a half and four inches long. They have iridescent white or yellow bodies that fade to gray near the tail. The face is purple and the fins are bright purple, yellow, and red. Firefish are considered to be easy to keep, as they readily eat frozen or dried shrimp or flake food and acclimate well to aquarium life.

Only a small amount of space is required for the purple firefish to thrive, so a 55-gallon tank with plenty of live rock and hiding places is an ideal setup. These fish are also reef compatible.

In the wild, the Bluestreak cleaner wrasse will clean the parasites from other fish, which is where its name comes from. Because of their social nature, these small fish, which grow to about five and a half inches, are known to be peaceful, active additions to the home aquarium. They can also be kept in a reef aquarium.

The Bluestreak cleaner wrasse is a good choice for experienced keepers. They can be kept in an aquarium as small as 30 gallons. However, a 55-gallon tank is even better, as it offers this lively fish more swimming space.