In this article, I will show you my picks for the 5 most beautiful reef safe fish that you must have. Not all saltwater fish are safe to have in a reef tank as many are known to pick at, knock over, and destroy corals. Some of my favorite fish are considered reef safe. The following fish all have amazing colors and markings. These 5 fish are totally safe to have around corals and you won’t regret having them in your tank.

The Coral Beauty is a Dwarf Angel and is reef safe. I have heard others complain about them not being 100% safe around corals, but I have kept many Coral Beauties over the years and can honestly say they have never bothered my corals. SPS, LPS, and soft corals are safe with these fish.

The name “beauty” really identifies these fish. They have a bright blue body with an orange center and blue stripes and will never fade as they age. The colors of these fish really pop under reef tank lights. They will only grow to around 4″ max and considered a semi-aggressive fish. For the most part, they are peaceful with other tankmates but can be territorial and fight with other dwarf angels.

The Coral Beauty is an active fish and can be seen swimming in all areas of the tank. They don’t require a large tank, but 70-gallons is recommended. They are considered an omnivore and will accept various types of food including pellets, flake, and frozen foods.

Some good tankmates for these fish include Clownfish, Yellow Tangs, Hippo Tangs, Chromis, and Anthias to just name a few. They will usually not bother invertebrates such as shrimp, snails, or crabs. They are a common fish to have in saltwater tanks and are readily available to purchase. On average they will cost around $30-$50 depending on size. 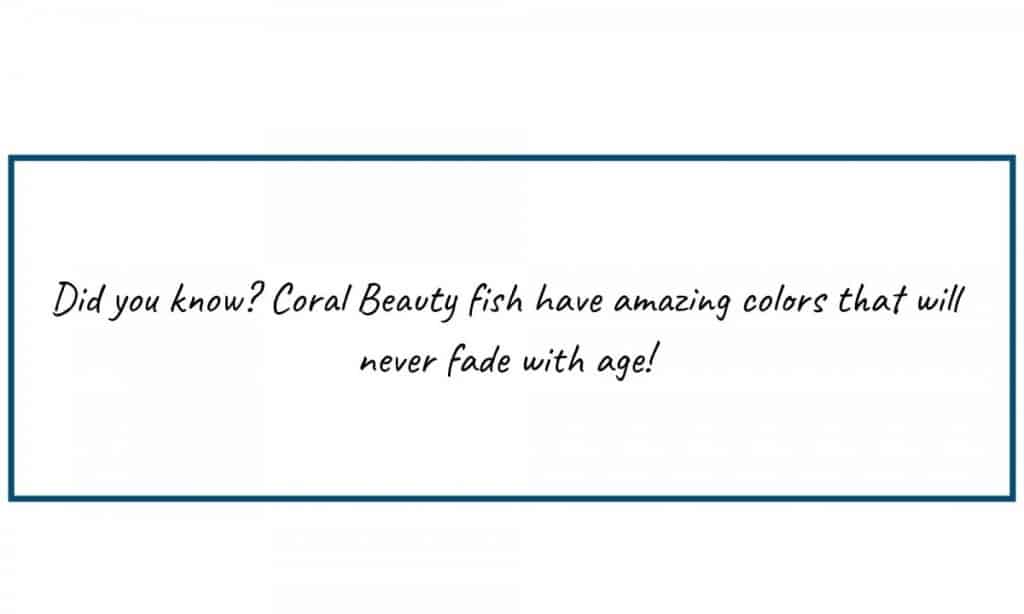 The Mandarin Dragonet is one of those fish that are stunning but are not meant for beginners. Although they are considered fully reef safe and won’t bother corals, they are difficult to keep due to their dietary needs. They require a mature tank that has plenty of copepods and amphipods for them to eat. Without that, they will starve to death.

A good idea is to have a refugium where you can naturally breed and grow a constant supply of pods for them to eat. You can purchase these online, but you still need a mature tank that contains a long-lasting supply.

It is also important to keep these fish only with other peaceful fish. They don’t do well with bullies. If you can meet the requirement of the Mandarin and are a seasoned hobbyist, then these fish make for a beautiful addition to your tank and are considered a must-have. Others will love seeing the Green Mandarin in your tank.

The Naso Tang is sometimes called the Lipstick Tang as their lips are very pronounced and colorful. Other markings include yellow and black stripes, mixed with blue and white. The body is a lighter shade of grey. One of the most predominant features of these fish is the tail which is shaped like a quarter moon with pointy tips. I know that’s a weird way to describe it but it’s true!

The Naso is generally a peaceful fish but can be aggressive towards other surgeonfish at times. It’s important to have a large tank for these fish as they can grow up to 12″ in size. They are reef safe and won’t bother any SPS, LPS, or soft corals.

They love to have a lot of open swimming space. They are very active and will occupy all areas of the tank. One thing to watch out for with them is they can be startled at times and are known to jump. So ensure to have a closed lid or top on your tank.

The Naso Tang is easy to feed and is considered a herbivore. As with other tangs, they love to eat algae in the aquarium. They will also eat algae sheets, marine seaweed, flakes, pellets, and frozen foods.

The Blue Hippo Tang is another reef safe saltwater tank that is not only popular but very colorful. These fish are known for their round and flat body shape which is royal blue in color. Combined with their bright-colored yellow tail, makes the Regal Tangs one of the most beautiful reef safe fish you can have.

The Blue Hippo is considered a peaceful fish and will get along with many other fish including the Yellow Tang. Unless it’s another Blue Hippo. They can become very aggressive towards each other. If you plan to have more than 1 Hippo Tang, you should introduce them to the tank at the same time and size to eliminate aggression.

Like the Naso Tang, these fish can grow to be quite large. It’s common to see them range from 8-10″ in home aquariums, so you should plan to have a tank size of 100-gallons or more to house a Hippo Tang.

An important thing to note with these fish is the fact they have a toxin in their caudal spine. This can be very dangerous and painful if you were to handle the fish and got stung. It’s not something that happens frequently but something to be aware of. The Regal Tang is considered fully reef safe and will not bother any corals or invertebrates.

Of course, I can’t make a list of beautiful reef safe fish without mentioning the Clownfish. These are perhaps the most popular reef safe fish there is and there are so many different types of Clownfish available for you to have. 28 different species actually.

All Clownfish are known as hermaphrodites, meaning they are naturally born as males, then morph or change genders usually when another female dies. Once the fish has morphed into a female, they cannot change back into a male.

Clownfish are known for their orange and white colors, but others can have a maroon or red, yellow and black as well. They are reef safe and won’t bother your corals. Actually they can be found hosting certain corals like Frogspawn, Octospawn, and many others.

They are generally a peaceful fish and won’t bother other tankmates. They do better in pairs, but be careful when having more than 1 pair in a tank. Clowns will become very territorial and aggressive to takeout other Clownfish they feel doesn’t belong. In order to have multiple clowns, you will need a large tank with many clownfish to have a chance. I recommend only having 1 pair per tank.

They can also be very protective of their anemone if you have one in your tank. I have been bitten many times by Clownfish being protective. They are a very active fish and enjoy following each other around the tank. They love to eat and will accept a variety of foods.

They also will do great in nano tanks if you plan to keep a smaller tank instead of something large.

What is a larger reef safe fish?

A Foxface rabbitfish are reef safe and can get quite large in home aquariums.

No, they are not. Although it can be hit or miss with them. You may get lucky with a Copperband but chances are you won’t.

Are all in one tanks good suitable for reef tanks?

Yes they are. There are many all in one tanks that range in sizes which are great for creating a reef tank.

More reef safe saltwater fish for you to see!