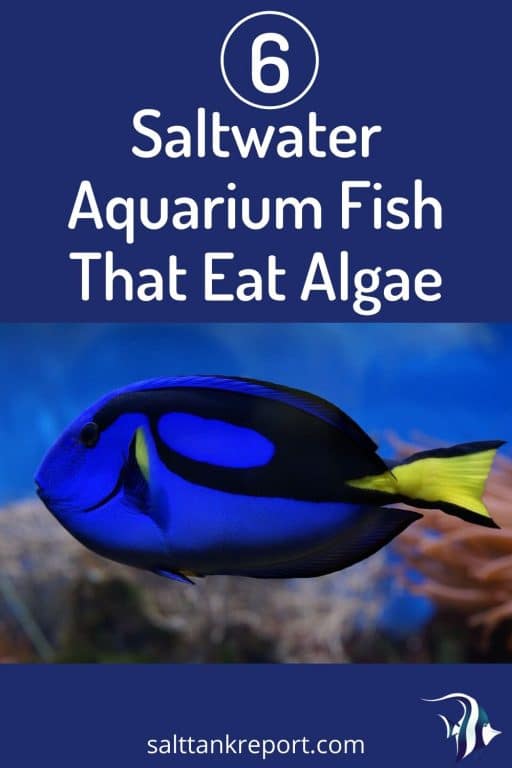 If you have nuisance algae in your saltwater tank, you are most likely thinking of ways to get rid of it. The good news is there many different types of fish that eat algae to help you eliminate it from your tank.

Keeping algae under control is important to the overall health of your tank. Too much algae can cause corals and other livestock to suffocate and die. You want to take proper measures to ensure your tank is free of nuisance algae.

When choosing your fish that will eat algae, remember to make sure they are compatible with other fish and invertebrates in your tank. You can check the fish compatibility chart here.

The Yellow Tang is a common fish to see in saltwater tanks. They can grow up to 8″ so it’s best they are kept in a 100-gallon tank or larger when full grown. They are known to graze on live rocks and rely heavily on algae in the tank. It is a herbivorous fish that love to eat marine algae seaweed along with frozen and live foods.

It’s best to keep only a single Yellow Tang in a tank at a time. Multiples can be a disaster unless they are entered at the same time into a very large aquarium. They generally don’t get along with each other and will most likely fight to the death.

They do get along with many other tankmates, including the Naso Tang, Hippo Tang, Coral Beauty Angelfish, Clownfish, and many more. The Yellow Tang makes a great choice if you need an algae eating fish as they are very active and spend most of the day grazing on algae in your tank. They are also reef safe and won’t bother your corals. 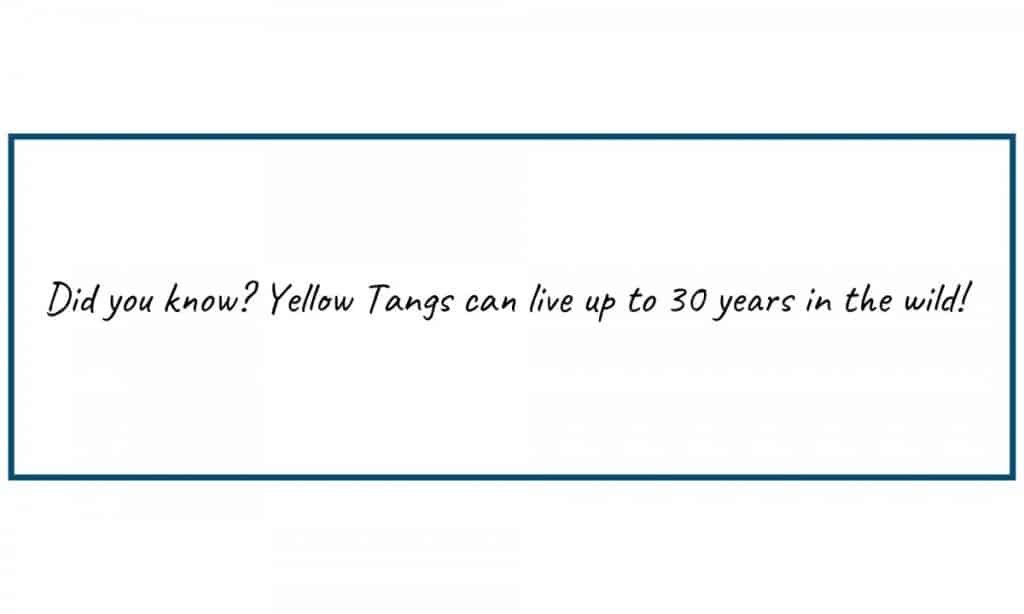 The Hippo Tang is another popular choice if you are looking for an algae eating tang. They are very colorful and can live up to 12 years in a home aquarium. They can grow up to 10″ in size so they require a large aquarium over 100 gallons to stay healthy.

Like the Yellow Tang, the Hippo is a great algae grazer. They will spend much of their time grazing on rocks and picking at algae in your tank. They will also eat algae off the glass and other equipment in the tank. They are known to eat many types of algae including hair algae, bubble algae, and turf algae.

Hippo Tangs will eat seaweed and other frozen foods along with quality pellets and flakes.

Another Tang that eats algae is the Vlamingi. I will say that they don’t consume as much algae as other tangs, but I still find my Vlamingi grazing on rocks and picking algae quite a bit. They are a very active fish and can grow to be very large with amazing markings and colors. The Vlamingi will require a large tank of 240-gallons or more as they can grow to be 24″ in size.

A very peaceful fish, they will get along with other tankmates that include the Yellow Tang, Flame Angelfish, Clownfish, Blue/Green Chromis, and many others. They have a long lifespan and can live up to 45 years. They will eat all sorts of algae and love frozen foods, pellets, and flakes.

Like most Tangs, they will eat macroalgae like Cheatomorpha. Spirulina, brine shrimp, and worms are also gladly accepted.

There are many saltwater angelfish that are great algae eaters. The Flame Angel is one of them. These fish are very colorful and will be active in your tank. They are one of the true showpiece fish that everyone loves. The Flame Angelfish is best to keep without other similar angels like the Coral Beauty. If your tank is large, you may get away with it but they will most likely fight with each other.

Other than other angelfish, the Flame angel will get along with most tank mates and won’t bother invertebrates. They are considered reef safe with caution and they may nip at certain corals. It’s hit or miss with them. I have had these fish in reef tanks and they never touch anything where others can pick at corals.

The Flame Angel is known to pick and graze on algae and rocks. They require a varied diet and will eat algae foods, frozen, pellets, and flake foods. They love algae seaweed and spirulina along with meaty foods like shrimp and other meaty fish.

The Lawnmower Blenny is also known as the jeweled Blenny or Rock Skipper. These fish are great for eating hair algae. Not only will they help remove it from your tank, but they will prevent it from forming. They can be seen hopping from rock to rock-eating algae as they go.

They actually do such a great job of eating algae that you may need to offer additional foods to prevent them from starving. Lawnmower Blennies are generally peaceful with most tankmates. They can become aggressive with similar species. These fish have a very unique personality and are great for smaller tanks.

These fish are not considered reef safe and they may nip at some corals. They will normally only eat algae but will accept algae seaweed or nori.

The Foxface is a stunning fish that does a great job keeping your tank algae free. It makes a great addition to any reef tank providing you have the right tankmates. The Foxface Rabbit will get along with most non-aggressive fish and is considered peaceful.

These fish have unique venomous spines so you need to take caution and not handle them. Other tankmates generally won’t bother with them due to this. Their flashing characteristic will show other fish not to harass them. It is possible that they can get bullied by Yellow Tangs as they are very similar in color and size.

Foxface fish are herbivorous will eat many algae types in your tank. Algae sheets (Nori) are recommended and they will also eat a variety of pellets, flakes, and frozen foods.

What types of algae will saltwater fish eat?

What are other livestock types that will eat algae?

Most clean up crews will do a great job at eating algae in your tank. Invertebrates like snails, shrimp, and crabs are great choices.

What fish will eat hair algae?

Not all algae eating saltwater fish will eat hair algae. Some tend to leave it alone and pick at other types. The best choice would be a Lawnmower Blenny.