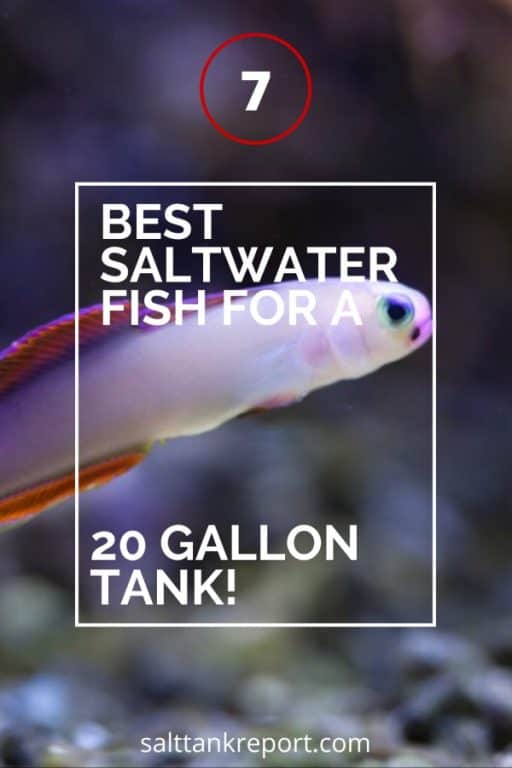 Choosing the right saltwater fish for this sized tank can be a bit of a challenge. Because of its dimensions and water volume, you will be restricted in the types of fish you can have.

When choosing the best saltwater fish for a 20-gallon tank, it’s important to not only look at their size but their behavior patterns and tankmates as well.

Luckily, a 20-gallon tank is not too small where you don’t have many options at all. There are quite a few amazing saltwater fish that are great options.

This article will show you the 7 best saltwater fish perfect for 20-gallon saltwater aquariums.

Also known as the PJ Cardinal, this is a peaceful fish that will do well in a 20-gallon tank. If you are keeping a school of these fish, they will require a larger tank but a single fish will be fine in this tank size. They will grow to around 2″ in size and get along with most tankmates.

The Pajama Cardinal is a slow-moving fish and it’s important to not mix them with aggressive fish that can bully them. They prefer to have plenty of rock formations to swim around and hiding places. They also love to hide in plants and seagrass.

The PJ has a variety of mixed colors including a green and yellow face with orange striped eyes. Their body is mostly silver with dark spots or polka dots throughout.

Their diet should include a mix of meaty foods such as brine shrimp, bloodworms, quality saltwater flake and pellet foods.

They are also reef safe and won’t bother any of your corals.

The Yellow Watchman Goby is one of the most unique fish on the list. Although these fish are considered to be peaceful, they will not tolerate another Goby in the tank unless it is a mated pair. It’s important to only keep 1 per tank.

As their name states, these fish are all yellow in color with a mix of brown. The Yellow Watchman will only grow to be 3-4″, so a 20-gallon tank is suitable. If you want to have a Watchman Goby, they require a sand substrate to dig in. They will also form a special bond with a Pistol Shrimp, so if you have the chance to get one of each, they will both benefit from each other.

Their diet should include a varied mix of Mysis and brine shrimp, table shrimp, and other frozen meaty carnivores. It should be fed a few times per day.

They will also accept quality marine flake food although it may take them a while to get used to it.

The Bangaii Cardinalfish are similar to the Pajama Cardinalfish. They are a very peaceful fish that get along most other tankmates that are not aggressive. They are slow-moving but are known to dart quickly if startled.

They prefer to have plenty of rock formations in the tank to swim around and hide in. Although these fish are great in schools, you can have a single species in a smaller tank like a 20-gallon.

They have a very unique shape and color patterns. They have long, angular fins and sport black stripes and white spots over their iridescent silver bodies. They will generally grow to about 2-3″ in size.

The Bangaii is one saltwater fish that will commonly breed in the aquarium. More breeders are now selling these fish and they are quite easy to find and affordable.

Similar to the PJ Cardinal, they will eat a mix of meaty foods including frozen, saltwater flake, and pellet foods.

There are over 28 different species of clownfish and almost all of them are suitable for a 20-gallon aquarium. Some like the Tomato Clown, can get quite large so it will need a larger tank but the more commonly kept clownfish like the Ocellarus will do great in a 20-gallon.

Clownfish have a variety of colors and markings with the most common being orange and white. Some clownfish are quite peaceful while others can be very aggressive. You can keep a single fish or a pair together. It can be very difficult to keep more than a pair in the same tank due to aggression.

Most clownfish will get along with other tankmates. They can hold their own with respect to being bullied but it’s important to not mix them with aggressive fish.

Although clownfish form a bond with an anemone, they are not always required. Anemones can grow to be quite large, depending on the type, so a small tank may not be suitable.

Clownfish are not too picky with respect to diet. As they are Omnivores, they will accept a mix of plant and meaty foods. This includes frozen shrimp, algae, bloodworms, saltwater flake food, and pellets.

They are also reef safe so you can mix clownfish with corals without issue.

The Royal Gramma basslet is a very colorful fish with a mix of bright purple and yellow. They are generally peaceful, but they have been known to be aggressive with other Basslets.

These fish are easy to care for and are considered to be very hardy. They don’t require pristine water conditions and will adapt easily to a new tank.

The Royal Gramma will only grow to about 3″ in size, so they make a great candidate for a 20-gallon tank.  It’s good to have lots of rock in the tank and provide plenty of hiding places for them to swim around.

One concern about these fish is they may pick on smaller invertebrates. It’s not overly common and smaller inverts seem to be the ones they target the most.

Royal Grammas are carnivores and their diet should include a mix of brine shrimp and Mysis shrimp that most aquarium fish feast on, but a varied carnivore diet will keep them the healthiest. 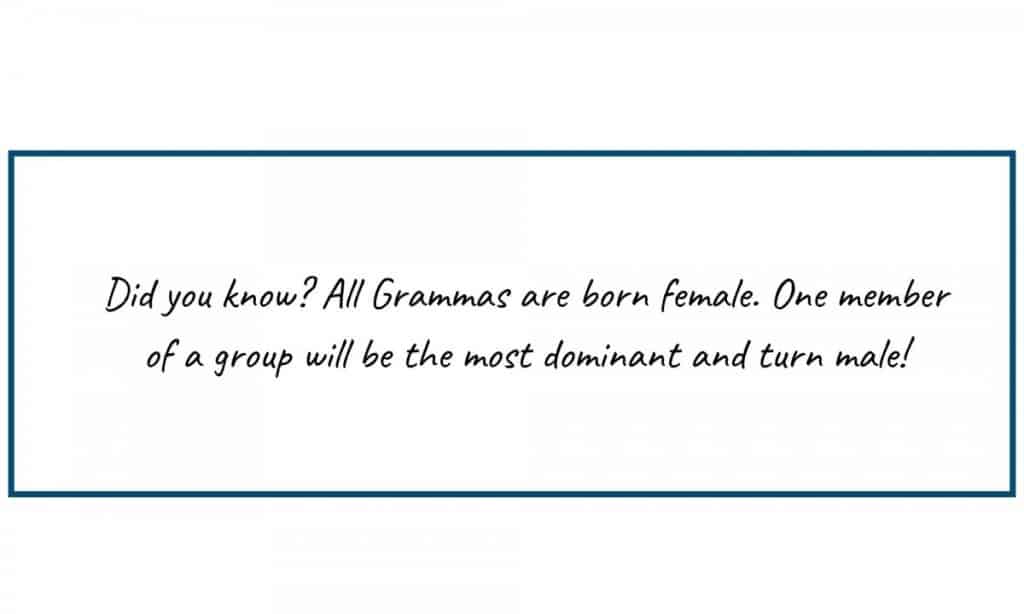 The Yellowtail Damsel is a small fish that does well in schools as well as a single species. These fish are very colorful with their body being a bright blue with a yellow tail.

Most damselfish are considered to be very aggressive and because of this, they are not commonly kept. But the Yellowtail damselfish is not one of them. Although they are considered semi-aggressive, they do not have the same nasty personality as other damsels.

These fish are very hardy and can adapt to many saltwater aquarium conditions. As long as your water parameters are within the proper range, these fish will do fine.

They are an Omnivore and should be fed frozen and dry meaty foods including Mysis shrimp. They will also accept flake and pellet food without issues.

The Purple firefish is also known as the Purple dartfish. They are a very thin and colorful fish with lots of personality. It is a peaceful fish and is very easy to keep if you are a beginner.

The body of these fish are a mix of iridescent white or yellow bodies that fade to gray near the tail. The face is purple and the fins are bright purple, yellow, and red.

These fish will grow a maximum size of 3-4″ so a 20-gallon tank is suitable.

The Purple firefish like to have plenty of rock rubble in the tank for them to hide in. Because of their small size, they can fit into some very small crevices.

The biggest concern with these fish is they are known to jump out of the tank. It’s crucial to have a tight-fitting lid to prevent them from jumping out.

If you plan to keep these fish, they should be fed a vitamin-enriched diet. This will prevent their colors from fading.

How many saltwater fish can I put in a 20-gallon tank?

Depending on the size of the fish, you should only keep 4-5 fish in a 20-gallon tank. Providing these fish will only grow to be 2-3″ in size. If your fish are smaller, then you could add a few more.

If you are planning to set up a new 20-gallon nano tank, any one of these 7 fish on the list will do well in your tank. Keep in mind with a smaller tank, you may run into aggression issues depending on the fish you are keeping. But providing you do your research and choose your fish wisely, you should have no problems!