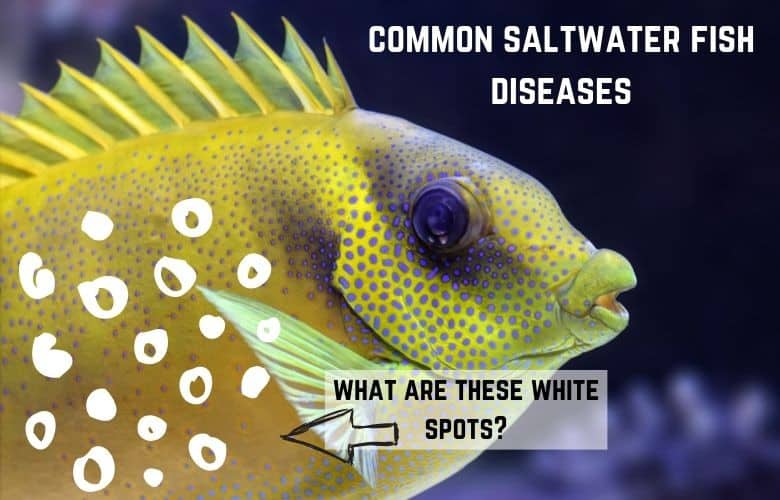 Spread the love
Table Of Contents hide
1 What Are Some Of The Most Common Saltwater Fish Diseases?
1.1 Marine Velvet
1.2 Marine White Spot Disease
1.3 Tuberculosis
1.4 Fin Rot

What Are Some Of The Most Common Saltwater Fish Diseases?

Unfortunately, no matter how well you take care of the saltwater marine life in your home aquarium, chances are sooner or later they will become sick. Although you may not be able to completely protect them against certain illnesses, you can use this guide to learn more about common saltwater fish diseases aquarium fish can get. By doing this, you will not only become aware of the different types of diseases, but you will also learn the signs to look for and the treatments that are available.

One of the most frustrating aspects of owning any type of land or water animal is that they can become ill with little to no warning. This is also true for saltwater fish as well. Not only can saltwater fish become very sick very quickly, but these diseases can also be fatal if they are not immediately treated.

As a saltwater fish enthusiast, you will need to take swift action when you begin to notice the signs and symptoms of disease among your saltwater fish. Your action, or inaction, can literally mean the difference between life and death for the occupants in your saltwater aquarium.

Also referred to as velvet, this is among the most common saltwater fish diseases aquarium fish suffer with. Marine velvet can quickly spread to all of the fish in the tank if it is not treated quickly.

So, what is marine velvet? It is caused by a one-celled organism or a dinoflagellate. The scientific name of the organism is Amylooddinium Ocellatum.

It occurs naturally in most saltwater aquariums, and for the most part, it functions as a parasite. It is very difficult to control once its population begins to increase in a saltwater tank, and this is why the disease seemingly appears overnight.

Once a saltwater fish becomes infected with the parasite, there is a range of symptoms that begin to appear. The fish may begin to bleed around the gills, or show signs of fatigue or stress.

The one sign that is more difficult to detect is the loss of lung tissue. As the disease progresses, it affects the gills and lung tissue. This causes the fish to lose the ability to move oxygen through the membranes in the gills and the fish will suffocate.

Because this disease has such a high mortality percentage, immediate action must be taken at the first sign of distress or inflammation in the fish.

Copper is a treatment that counteracts this disease, but it must be introduced into the aquarium at the right levels because highly concentrated copper is toxic to saltwater fish. This is one of the reasons why all dosage instructions will need to be closely followed.

This disease is commonly referred to as Marine Ich. It is also caused by a parasite called Cryptocaryon irritans. The tell-tale sign of this disease is the appearance of white spots that covers the gills, fins and the body of saltwater fish.

Marine White Spot disease is similar to freshwater Ich. The only difference is that it is caused by a different organism. However, both of these diseases are extremely contagious. The disease can be more aggressive in saltwater fish who already have injuries or are under stress.

In addition to the white spots, some of the other noticeable symptoms are:

Even though one of the treatment regimens for freshwater Ich is increasing the water temperature in the tank, this does not work as well for saltwater fish diseases aquarium fish get like marine white spot disease. It is recommended that copper is added to the water at a rate of 0.15 to 0.25 mg per liter. A great product to use is Cupramine by Seachem. 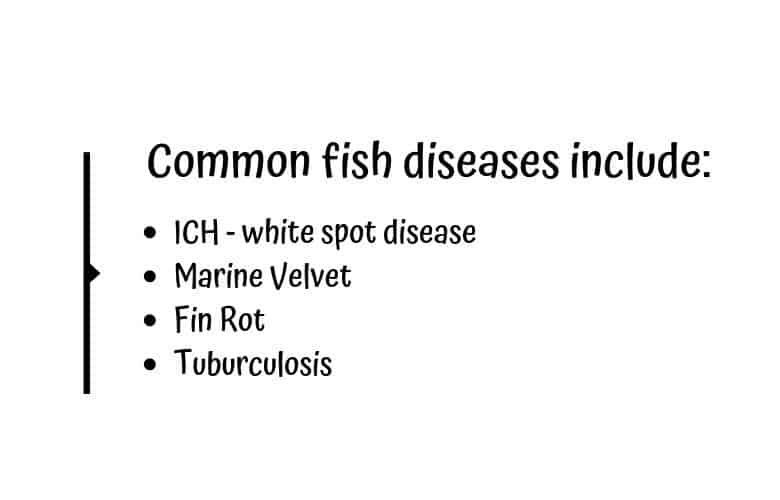 This disease affects saltwater fish more than freshwater fish. Nicknamed the ‘wasting disease’, tuberculosis often presents itself through fin erosion. Fish may also exhibit other signs such as:

If the disease is diagnosed early enough, it can be treated by using anti-bacterial medications. However, these types of medications are not very effective for fish who are suffering from severe tuberculosis.

Saltwater aquarium enthusiasts can have the most success in treating marine life by keeping infected fish away from other occupants in the tank.

Tuberculosis thrives in saltwater tanks that are poorly cleaned and maintained. Bad water quality and having too many occupants in the tank can also increase the chances of the bacterial infection growing and spreading among the fish.

This is a bacterial infection that affects saltwater fish who are either being physically abused by other occupants in the tank, or they are living in poor tank conditions. When there is aggression among tank mates, fin-nipping is a very common behavior. Fin-nipping can lead to secondary infection, fin rot.

The goal of the treatment is to stop the progression of the fin rot before the fish loses the entire fin. Any fish who are infected should be quarantined and given anti-bacterial medication for treatment. I recommend using Mardel Maracyn 2 as treatment.

Saltwater aquarium owners should also be proactive in making sure that the tank stays clean. Changing the water frequently for water quality improvement should also be included in the treatment plan. In some situations, the tank may benefit from a salt bath.

The best way to prevent saltwater fish diseases is to make sure the saltwater tank is always clean. You can do this by replacing the filter regularly and change the water routinely.

Also, be sure that you do not overfeed your fish. Uneaten food and fish waste can accumulate in the tank and cause the ammonia and nitrate levels in the tank to rise.

Even though you cannot always protect your marine life from saltwater fish diseases, you can increase their chances of recovery and survival by having some basic knowledge about these diseases. You can recognize symptoms and quickly begin appropriate treatment which increases your chances of saving the life of your fish.