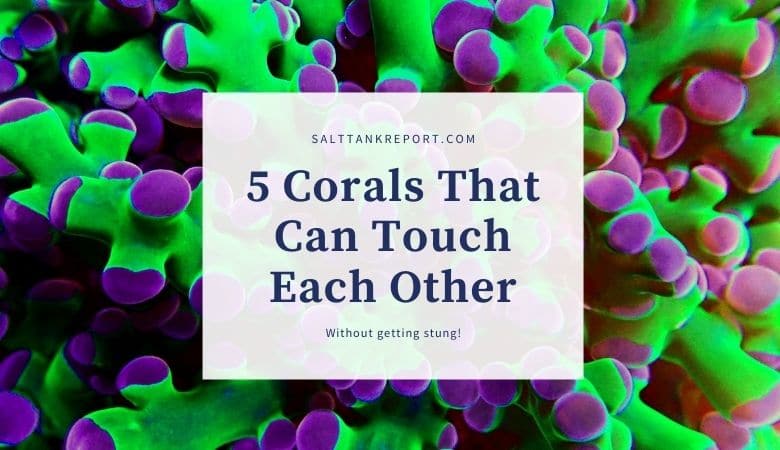 When considering corals to add to the home aquarium, many aquarists suggest keeping the corals separate so that they can’t touch each other.

Corals can be somewhat aggressive, and different coral types will sometimes sting other corals. However, some coral species don’t seem to bother each other.

This is particularly true when two of the same species are placed together.

These corals can grow right next to each other and can even touch with no problem.

Figuring out which coral species can be kept together can keep the corals healthy and happy.

It’s important information for anyone who wants to save space or create a dense, beautiful waterscape of corals living together.

Contents hide
1 Corals That Can Touch
2 Frogspawn Coral
3 Hammer Corals
4 Zoanthids
5 Pulsing Xenia
6 Mushroom Corals
7 Can a torch coral touch other Euphyllia corals?
8 Can Acropora touch each other?
9 Can leather corals touch each other?
10 How much space should you leave in between corals?

Corals That Can Touch

Frogspawn is a large, beautiful coral with either bright green or purple tips. These corals are only moderately difficult to care for, and they can be placed at either the middle or top of the tank.

Although they’re sometimes considered to be aggressive, frogspawn corals work well with other members of their species and are often quite peaceful.

Frogspawns can also be placed near hammer or torch corals.

In general, frogspawn corals, which are also known by their scientific name, Euphyllia divisa, can safely touch any other Euphyllia coral.

Some aquarium keepers claim that torch corals, which are also Euphyllia members, can be kept next to frogspawn, but others feel they’re not compatible.

These two corals should be kept under close observation if placed together.

Read: Can you have too many corals in a saltwater tank?

When it comes to corals that can touch, hammer coral is one of the most popular choices. Hammer coral, also known as Euphyllia ancora, is a relatively hardy, somewhat aggressive coral species.

These corals are available in a wide range of neon greens, pinks, and purples. Their polyps are thick, short, and wavy.

These corals are often placed at the bottom of the tank, and they prefer moderate lighting and water flow.

Although the hammer coral is known to be a bit aggressive, it can be safely placed next to any other hammer coral variety.

It also works well when placed next to frogspawn corals or almost any other Euphyllia coral type.

The only exception to this is torch corals, which will often burn hammer corals.

Zoanthids are some of the most striking corals available. They are usually shaped like round discs with waving tentacles at the edges, and their colors can be neon or metallic in hue.

They’re often seen in shades of pink, green, yellow, blue, and purple. Aquarium keepers often use Zoanthids to create a garden effect, as they look very similar to blooming flowers.

These corals are considered to be hardy and relatively easy to care for. They also grow very quickly and can spread rapidly across an aquarium.

Zoanthids are usually quite peaceful, so they make a good addition to a more closely-spaced aquarium. Zoanthids grow very well with other Zoanthid types and almost never sting each other, although they may compete for space.

They also rarely sting any other coral varieties, so they can be kept near any other peaceful corals. Aquarium keepers will only need to ensure that they don’t try to overgrow their neighbors.

An airy, feathery bright pink, purple, or blue coral, the pulsing xenia is an attractive addition to the home aquarium.

They’re also considered to be very easy to care for, even for beginners.

Because they grow so quickly, pulsing xenia corals may compete with other corals for space and can even overgrow them.

However, they’re very peaceful corals and almost never sting other corals, so they can touch any other peaceful coral types, including other pulsing xenia.

This doesn’t mean that they cant be stung by others. Although they will grow fast and pretty much anywhere in your tank, it’s important to place them properly to avoid being stung by more aggressive types of corals. 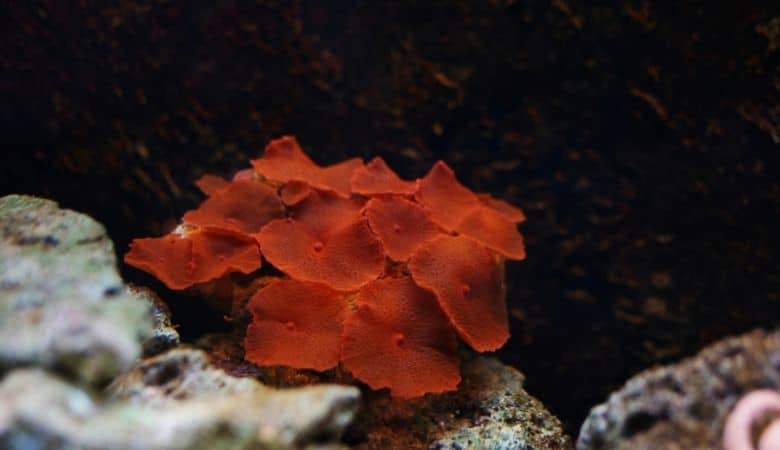 Another of the most popular corals that can touch is mushrooms. As their name suggests, these corals usually grow in a thick, rounded disc shape. They’re available in a range of colors, including orange, purple, and green.

These hardy corals are very easy to care for and will do fine when provided with moderate lighting and water flow. They grow quickly and they’re only considered to be semi-aggressive.

However, these corals can become aggressive when it comes to competing for space, so care should be taken so the mushrooms don’t overgrow other corals.

Can a torch coral touch other Euphyllia corals?

The answer to this question can be a bit complicated. The general rule is that any Euphyllia coral, including torch coral, can be kept close enough to touch any other Euphyllia coral, such as a hammer or frogspawn.

However, torch corals can be very aggressive, and they may sting other Euphyllias.

For this reason, it’s best to either keep torches separate from other corals or keep a very close eye on them to see how they behave.

Some aquarium keepers have had great success keeping torch corals near other Euphyllia corals, but it depends on the particular coral.

Can Acropora touch each other?

The answer to whether Acropora corals can touch each other depends on the specific coral.

Some Acropora corals are very aggressive and must be kept by themselves, away from other corals.

Others are relatively peaceful and can touch other Acropora corals with no problem. The best idea is to offer space and keep an eye on the corals to see how they react to each other.

Can leather corals touch each other?

Leather corals can usually touch each other without any issues.

Sinularia leathers may be a bit more aggressive than other varieties, but usually, after a period of adjustment, all leather corals can live peacefully in close proximity to each other.

The corals may at first sting at each other, but this should resolve relatively quickly.

How much space should you leave in between corals?

A good rule of thumb is to always leave about 6 inches of space between any two corals.

This space helps to ensure that corals can’t reach over and sting each other.

It also offers plenty of space for corals to grow. It’s also good to remember that at night when they open to feed, many corals can actually double in size.

Peaceful corals can sometimes be kept closer to each other, and some can even touch. To determine whether corals can be kept together, study their species’ aggression level, and monitor the temperament of the particular coral.

Corals aren’t plants, but animals, and like any other animals, they have different personalities. If the corals seem gentle, they can be moved closer together.

If brown spots appear on the corals or the corals refuse to open or extend their polyps, however, they may be stressed and should probably be separated.