5 Best Corals You Can Put On The Sandbed

If you have a sandbed or other type of substrate in your reef tank, you might be wondering what types of corals are best to position on the sand. 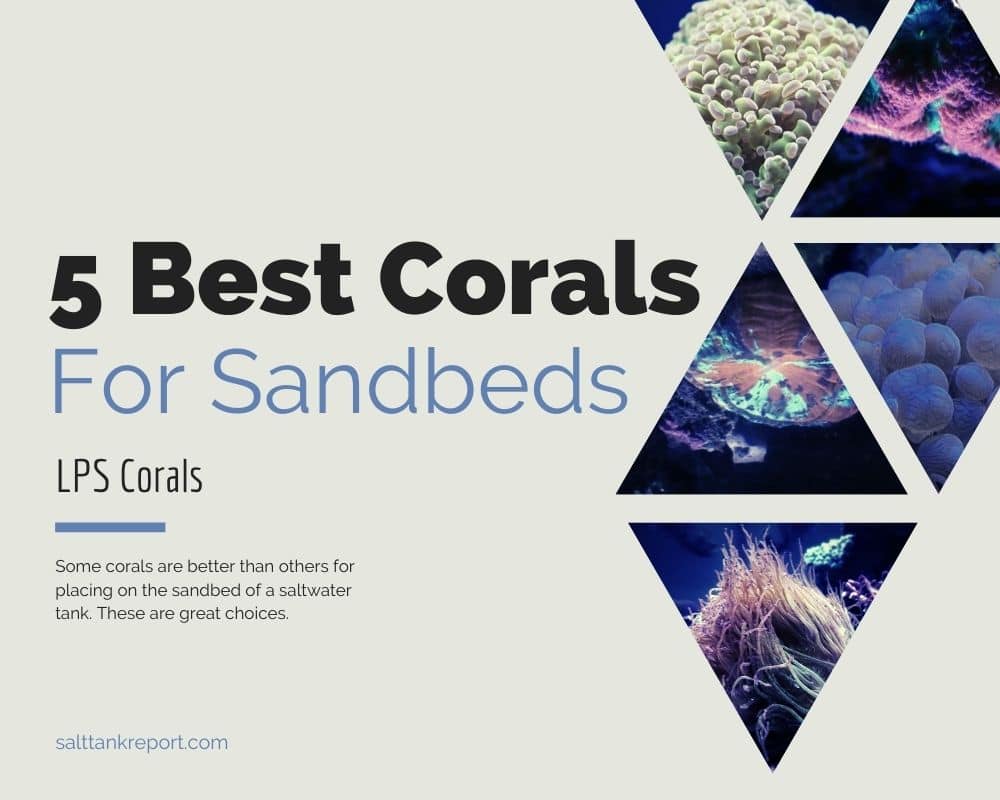 One issue with having a sandbed substrate is the fact that sand can blow around the tank and cover corals. Of course, you can adjust the flow in your tank to keep this from happening, but some sands are a fine grade and will blow around periodically.

Some corals will be able to adapt and handle this but many will not. Corals that are bowl-shaped can be filled with sand inside causing them to suffer and die off easily.

Also, you probably have some invertebrates like snails and crabs that love to dig around in the sand. This can be a nuisance to some corals and cause them to be stressed.

Lighting is also a factor in determining what corals will do well on a sandbed. Certain corals like SPS will prefer to be placed higher up in the tank where the lighting is better for them. Sitting in the bottom of the tank may not be the best choice for high light corals, of course, that will depend on your lighting type as well.

Here are 5 best corals you can put on the sandbed:

The donut coral is a great beginner coral that should be placed on your sandbed. The donut is a large LPS coral that can grow quickly and consume a large amount of real estate in your tank. They need lots of room to expand, and plenty of space between other corals even though it is not considered an aggressive coral.

The Duncan coral does not require high water flow or lighting. Therefore a perfect candidate for the bottom of your tank. It is not normally covered by sand as they are generally thick in size. It is of course round in shape like a donut and comes in many different color patterns. They are often referred to as the Cat’s eye, button, or meat coral and make a great addition to larger reef tanks.

My huge donut coral on the sandbed!

The Elegance is another LPS coral that can grow to be quite large and is great for all hobbyists. They prefer to be placed in the substrate as soft sand is less likely to irritate the fleshy underside of the coral when compared to the rockwork.

It’s important to provide plenty of space in the aquarium between it and other corals as it will expand to twice its usual size during the day and will sting other corals to it.

The Candy Cane coral is a great candidate for sandbeds. They don’t require high lighting or water flow plus they look great as a larger colony sitting in the sand. It’s important to not place these corals at the top of your tank where the lighting is too high as they can bleach and die off easily.

The Candy Cane is another LPS coral that is not aggressive so you won’t need a lot of space between them and another non-aggressive coral type. They are known to grow fairly quickly and form new polyps and heads. It’s doesn’t take long for a small frag to grow into multiple heads under the right conditions. Giving them space on the sandbed allows them to grow and flourish.

The Bubble Coral is a sensitive LPS coral with a hard skeleton that is best suited for the sandbed of your tank. The coral has fleshy type polyps that will cover the skeleton when extended. These polyps are very fragile and can tear easily if not properly cared for.

For this reason, it’s best that they do not sit in rockwork that can damage or puncture them. They also prefer a low to moderate water flow and lighting. Sitting low in the tank will provide that for them. These corals also have long sweeper tentacles that can sting others, so it’s best if they have plenty of space between other corals.

When handling a bubble coral, make sure to only touch the skeleton parts as you can risk causing damage to their flesh.

The Hammer Coral is an LPS coral and is very popular to see in reef tanks. They are generally easy to keep and are a great beginner coral. They do well in the sandbeds of aquariums as they don’t require as much lighting or water flow as some other corals. Although they can handle a moderate flow, they won’t like high flow.

These corals are considered to be a showpiece as they grow larger and form new branches and heads. The wall hammer is easy to keep in the sandbed as its skeleton wall can lay in the sand and be stable. Hammer corals should not be kept in high positions on rocks in your tank.

The hammer Coral is similar to the frogspawn and Octospawn Coral. Most Euphillia type corals will do great positioned low in the tank on your sandbed.