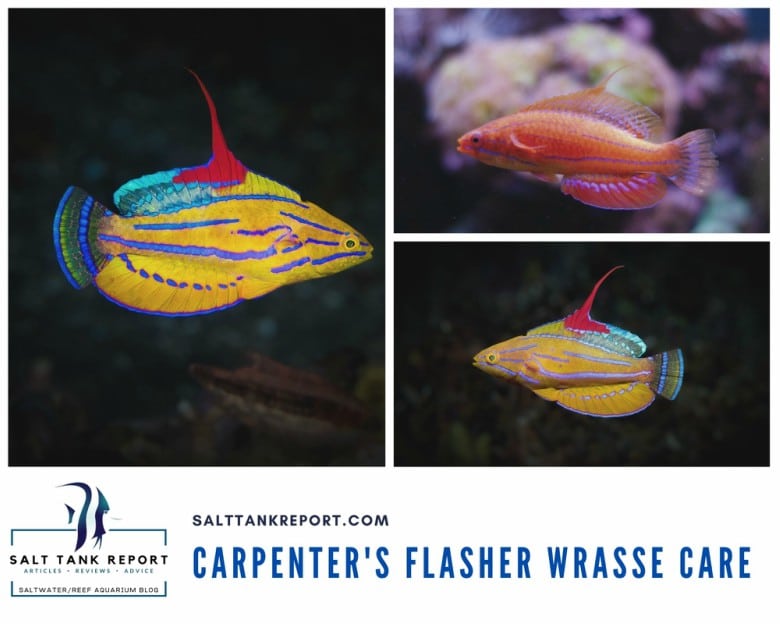 The Carpenter’s flasher wrasse is one of the most sought-after saltwater fish because it remains relatively small, is quite peaceful, and is also generally considered to be reef safe. 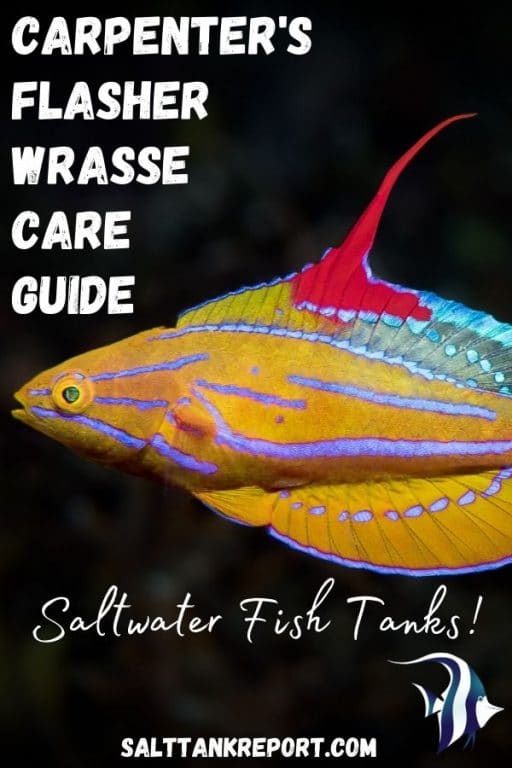 In addition, flasher wrasse care is not overly challenging, so they are a good choice for even beginner saltwater aquarium keepers.

This wrasse is also quite colorful, and the males of the species have attractive spiked fins. The wrasse is a bright reddish-orange color when it’s young. This color fades to yellow along the body as the fish matures, although the fins tend to retain a more orange hue.

Electric blue lines and spots also stripe the fish’s body. Males tend to be a bit more colorful than females, and females lack the elongated fins.

Males will also become more colorful when kept with a group of females.

This fish only grows to about three inches in length, so it won’t require a large aquarium and can be kept in a group without overly crowding other tank mates.

The flasher wrasse is a peaceful species. It won’t nip at any invertebrates or corals it’s kept with, making it a great choice for a community reef tank. Fish that are a similar shape to the wrasse may occasionally be chased around by the wrasse, but this behavior tends to be infrequent and mild.

This wrasse is also known as a friendly, relatively outgoing fish. It doesn’t usually hideaway in the aquarium, but will instead swim freely and may even come to the glass to greet any people. 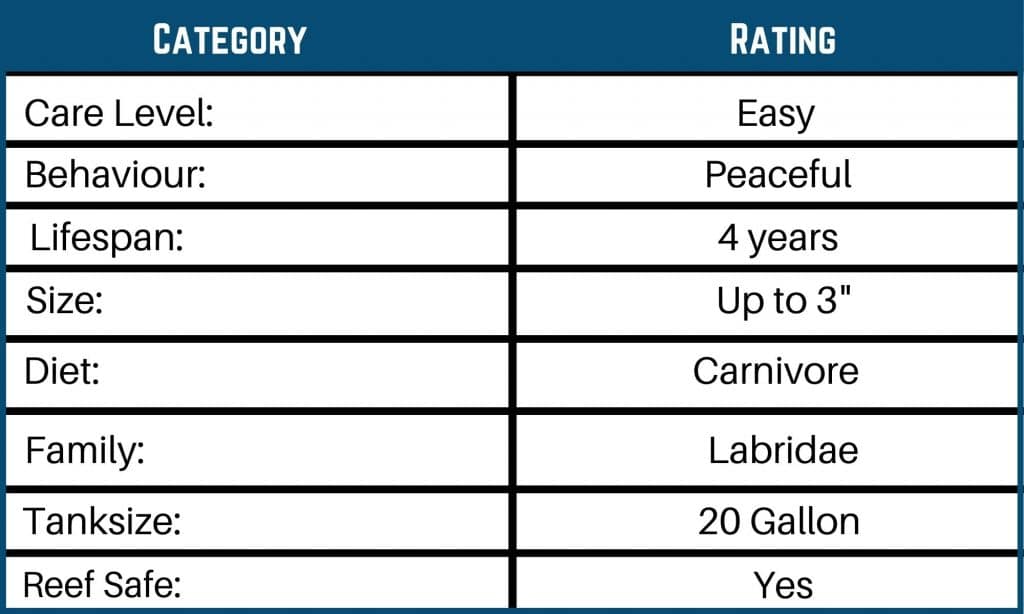 This wrasse also does well when kept in a group of its own species. When keeping them in a group, ensure that you have at least two females for every male wrasse. It’s often best to simply keep one male per aquarium. Always introduce the females first so as to avoid any territorial aggression from the male. It’s also a good idea to introduce all of the wrasses before introducing any other fish.

A key step in flasher wrasse care is ensuring that the fish are housed in the proper habitat. A single wrasse can be kept in a 20-gallon aquarium. A 50-gallon tank is an adequate size for a small group of fish, although a larger tank is always a good choice, and will be necessary for a larger group or community aquarium.

These fish are also known as excellent jumpers, so a tight lid is a must.

This wrasse variety is carnivorous. Frozen shrimp, mussels, or crab meat, chopped into little pieces, work well. Daphnia and small brine or Mysis shrimp can also be offered. Small amounts of food offered several times a day are ideal. I suggest feeding up to three times per day.

These wrasses can be quite quick and demanding when it comes to feeding, and they may eat faster than other aquarium inhabitants.

Because of this, it’s important to ensure that all of the fish are getting their fair share when it comes to feeding time.

The flasher part of this fish’s name comes from the display performed during breeding. In the wild, the male and female wrasse will perform a sort of dance together. The male will dart through the water, flaring his fins at the female.

The male’s color will also become very vibrant during this display. The pair will gradually rise up, through the water column.

There, the fertilized eggs will be released to drift through the water. After, both fish will return to their original depth.

Because it requires a large amount of space to breed, this fish does not generally reproduce well in the home aquarium. They have, however, been known to breed in much larger public aquariums. Therefore, breeding may be achieved in a much larger aquarium with a great deal of vertical space, which is crucial in order for the male to perform his unique flashing dance.

Although actual breeding may not take place, keeping a male with a group of females does encouraging bright colors in the male and will often lead to the flashing behavior that leads up to mating.

This wrasse species is known as a hardy fish, and they’re not prone to any particular diseases or conditions. However, it is important to always choose fish from a reputable source and to avoid buying any fish that seem to have an illness or injury.

It’s also crucial that the fish are acclimated to the aquarium carefully so as to avoid any stress, which could lead to a compromised immune system. Drip acclimation, lasting for about an hour, is often the safest and most effective way to acclimate these wrasses.

Most juvenile wrasses cost between $40 and $50. Because they’re a popular fish, and because they must be caught and are almost never captive-bred, they can sometimes be a bit difficult to purchase, as they are quite sought after.

Should You Add a Carpenter’s Flasher Wrasse to Your Aquarium

This wrasse variety is an excellent choice for everyone from beginner to advanced saltwater aquarium keepers. They’re an entertaining, friendly, colorful fish that will add a spark of life to the aquarium. They’re also peaceful and reef safe, making them a good option for many community tanks.

The only time when this particular wrasse should not be added to an aquarium is if it will be kept with aggressive tank mates or other wrasses. 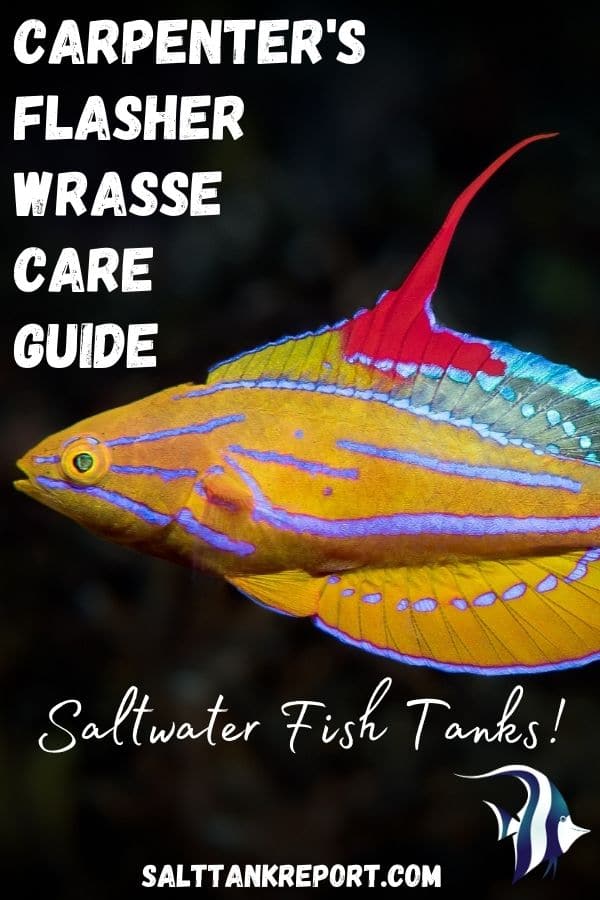