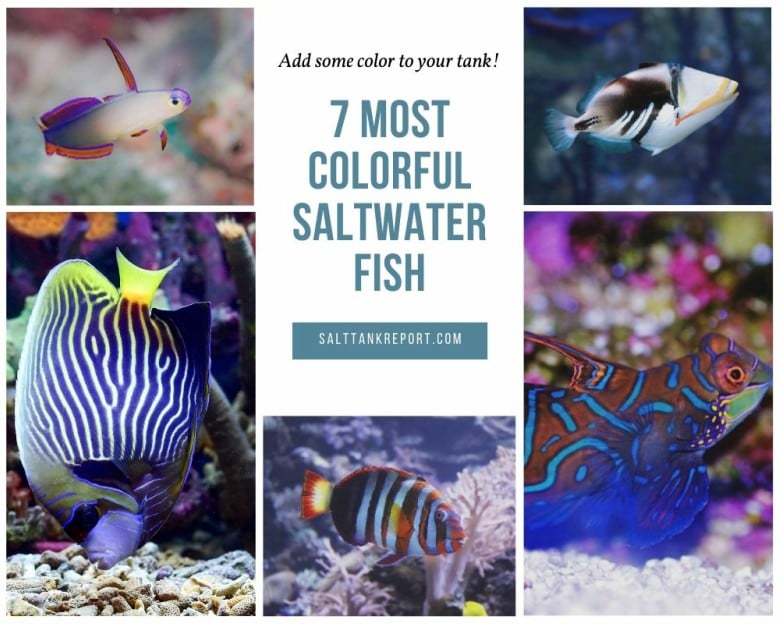 One of the deciding factors on choosing a fish for your saltwater tank is its overall color and appearance.

There are so many saltwater fish available that are simply stunning and adding them to your tank can turn it into an instant showpiece.

Of course, with so many different species of saltwater fish, it can be difficult to choose the most colorful ones.

But there are a few that stand out from the pack and are labeled as the most colorful fish you can have in your tank.

I have chosen my list and here are the 7 most colorful saltwater fish. 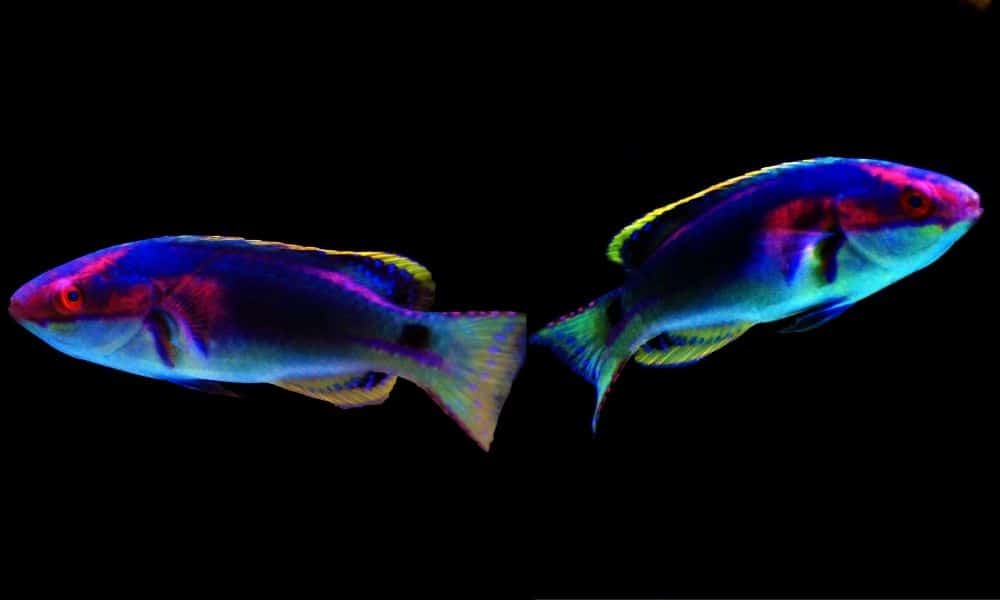 I have chosen this fish as the most colorful as it has a mix of many different colors including blue, pink, red, purple, yellow, and green. The Lineatus Wrasse has several lines and spots which makes it very appealing and desired by many hobbyists.

It also has bright colored eyes that really stand out. This fish is one of the most peaceful fish in the hobby. It should only be kept with other peaceful fish. It is considered reef safe and will not bother corals or invertebrates in your tank.

The Lineatus wrasse should be fed a mix of meaty foods like Mysis and brine shrimp, along with high-quality pellets and flakes. They are not commonly seen in saltwater aquariums and are mostly available online.

Be prepared to pay a bit more than your average saltwater fish. They will cost around $200 each.

If you have a chance to have one of these fish, you will certainly enjoy it. Other stunning wrasses to mention are the Melanurus Wrasse and the Carpenter’s Flasher Wrasse. 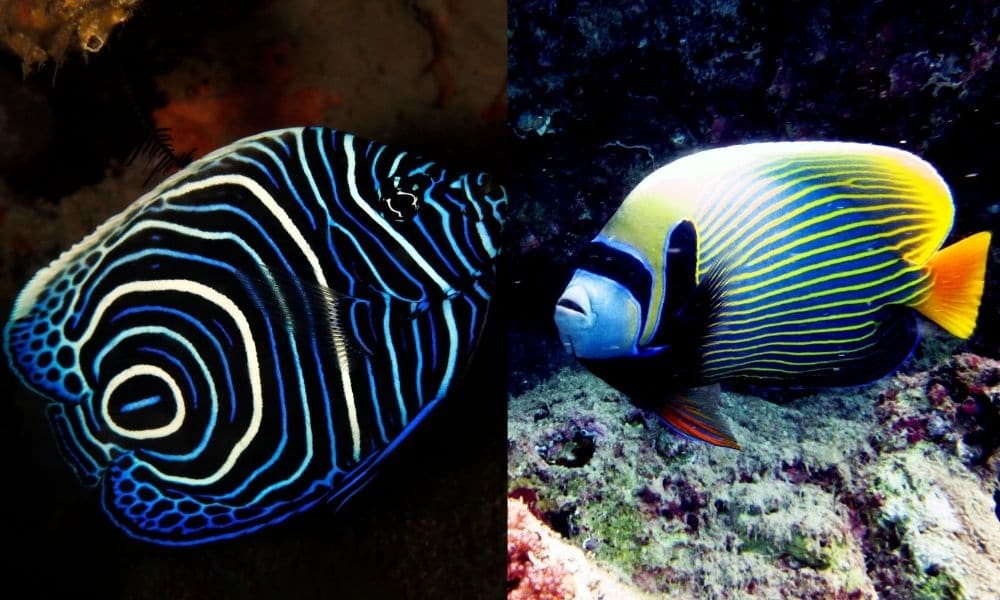 The Emperor Angelfish is one of those fish that will change colors as it matures. As a juvenile, it will have very bright blue and white colors and as an adult, it will have more of a deeper blue with long yellow stripes.

It is a very popular fish to keep but it will grow to be very large at around 12” so make sure you have an aquarium of at least 125 gallons.

They can also live for up to 20 years and are considered to be semi-aggressive. They are territorial towards smaller fish and other angelfish that are similar to them.

Choose your tankmates wisely if planning to keep an Emperor Angelfish. 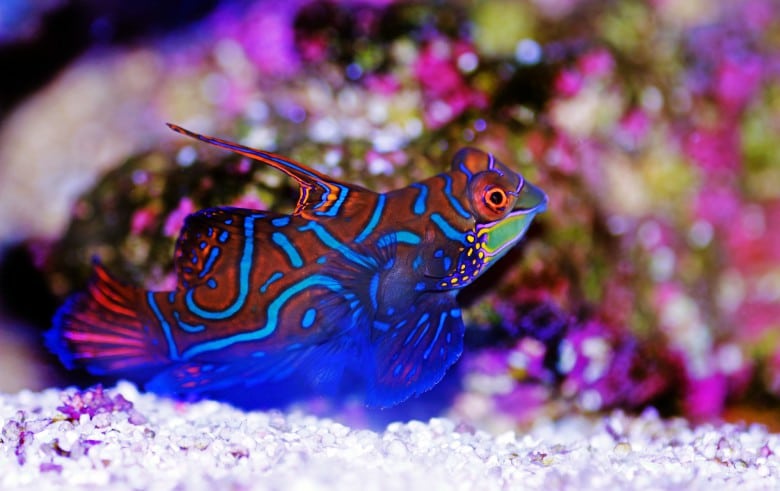 The color patterns on the Mandarin Dragonette Goby are amazing. You will see a maze of different colors including green, orange, and blue. Their colors are very vibrant and look great under any type of saltwater lighting.

This is a very peaceful fish that only grows to a maximum of 3”. The Mandarin goby is not for beginners or saltwater tanks that are not mature. They have a unique feeding requirement where they will only eat copepods that are present in mature tanks.

They may also accept live shrimp and worms but copepods are their main source of food. If you have a well established and mature saltwater tank and can meet their feeding requirements, the Mandarin Goby makes an amazing show fish. 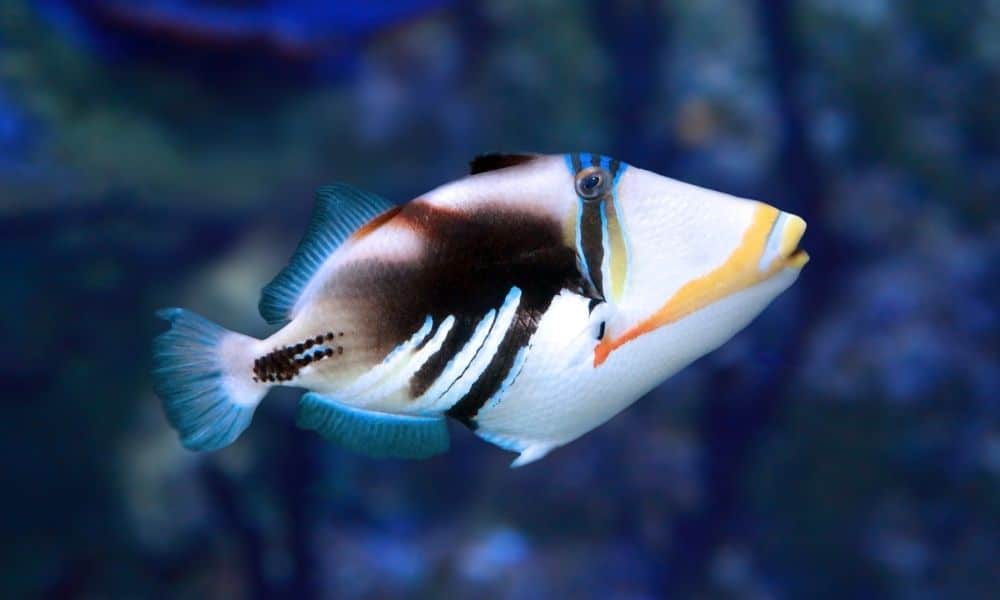 The Picasso Triggerfish is certainly one of the most unique fish available for saltwater tanks. They have a very unique painted like appearance with a mix of brown, blue, and yellow stripes on a tan-colored body.

It has a dark spot in the center of its body with a bright-colored orange and yellow line extending from its mouth. Most Triggerfish are considered aggressive, and although the Picasso is not as aggressive as others, it can still be a bully.

They will grow to around 10” and are a fast-moving fish. Ensure your rocks and corals are secure as they can bump into rocks and knock them over.

The Picasso is for sure a centerpiece of any tank providing there are no corals in the tank.

They are not reef safe and should not be trusted around corals or invertebrates that they can eat. 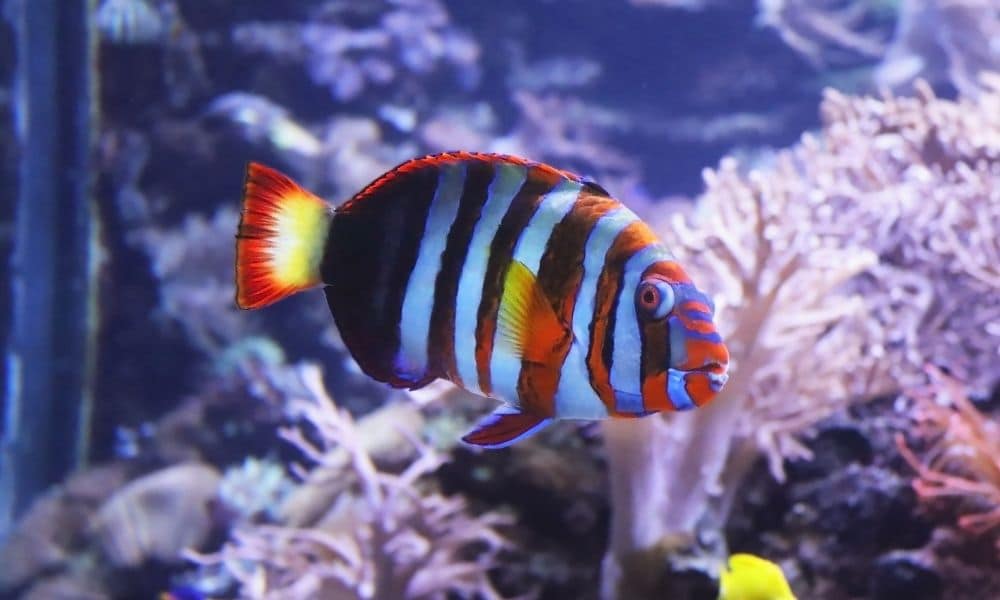 Another interesting and very colorful fish is the Harlequin Tuskfish. They have a mix of orange, white, blue, yellow, and black. These unique fish have bright blue teeth or tusks that are used to crunch invertebrates. So they are not safe to keep in a tank with inverts.

They are also somewhat reef safe but care should be taken if keeping them with corals. Even Though many people keep them with corals safely, they are best kept in fish only saltwater tanks. As they grow, they will become somewhat aggressive although they can be kept with many other fish like angelfish, tangs, and triggerfish.

They shouldn’t be kept with peaceful fish as they will be bullied, and smaller fish can be eaten.

The Harlequin Tuskfish should be fed meaty foods like Mysis and brine shrimp along with a mix of high-quality pellet and flake foods.

The Flame Angel is a very common fish that is easy to purchase from most saltwater aquarium shops. They add plenty of color to your tank with a mix of bright red, blue, black, and orange.

The word flame really suits them. They are a very active fish that will swim throughout all levels of your tank. They are aggressive with other angelfish like the coral beauty and bi-color angel.

It’s possible to keep them together providing that you have a large tank. They will grow to around 4” and are safe to keep with invertebrates and corals. Some people have said they can bother certain corals but I have had no issues with them.

You will need a tank size of 55 gallons with plenty of live rock to keep 1 Flame angel. You can not keep 2 males together in the same tank. They should be fed a mix of pellets and flake foods.

They will also eat frozen foods like spirulina and shrimp. Live rock is important as they will graze and pick at algae on the rocks. 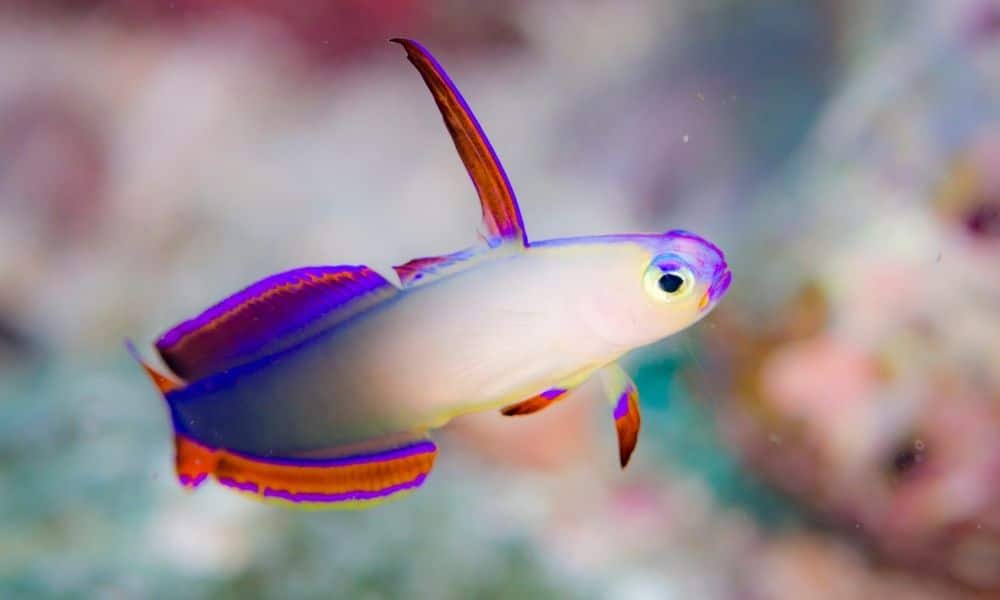 Last on the list is the Purple Firefish Goby. This is a small peaceful fish that will reach a size of 3”. It can be kept in saltwater tanks with other peaceful fish and invertebrates. Only 1 fish per tank should be kept as they will fight with another Firefish unless it is a mate.

For a small fish, it sure has some amazing colors. A mix of yellow, red, purple, blue, pink, and white can be seen. They really stand out with their bright colors. You can keep these fish in nano-sized tanks of 20 gallons or larger.

They enjoy swimming around live rock with plenty of hiding places. In order to keep their vibrant colors, they need to be fed a vitamin-rich diet. This includes brine shrimp and Mysis.

They will eat foods from the water column and pick food off the rocks and bottom of the tank. Purple Firefish can be purchased for around $50-$60.

Now that you have seen my list of 7 most colorful saltwater fish, which ones do you like the most?

There are so many more colorful fish available but these are the elite. One thing to keep in mind is that some of these fish won’t show their full-color potential until they reach the adult stage. Juveniles can look completely different than their adult versions.

Any of these fish mentioned here will make for a stunning addition to your saltwater tank.