Easily one of the most beautiful fish available for a saltwater aquarium, the purple tang has a long, rounded body. Its large dorsal fin gives the fish a nearly circular appearance.

The exception to this rounded appearance is a narrow snout. These fish generally grow to between eight and 10 inches long.

As their name suggests, purple tangs range from dark blue to purple in color, with darker coloring near the center of the body.

Tangs may also display black spots or stripes, particularly near the face and along with the lighter areas of the body. In addition, purple tangs have bright yellow tail fins and most have yellow tips on the pectoral fins.

Purple tang care is not considered to be difficult. When they are given adequate space and the correct diet, these fish can live for up to 10 years and add not only color but a lively personality to the aquarium. 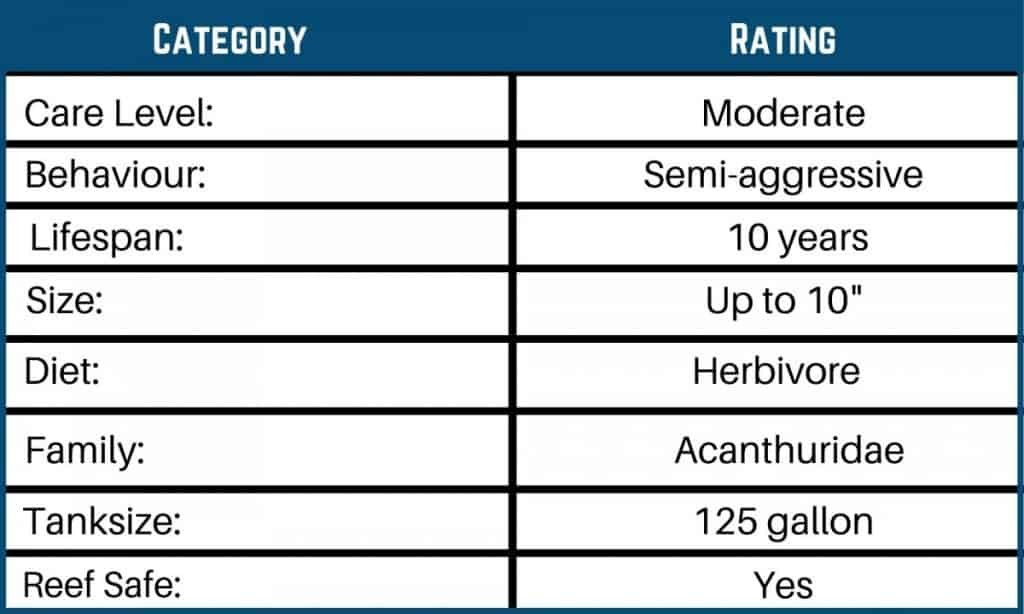 Although purple tangs tend to be non-aggressive towards other saltwater aquarium inhabitants, they can be quite territorial around other tangs or, in fact, around any fish that have a similar size and body shape.

For this reason, it is generally recommended that purple tangs be kept singly and that they are housed without any other fish that have a similar appearance.

In rare cases, if the aquarium is large enough and the purple tang does not display overly aggressive behavior, it can occasionally be kept with other tangs.

In these circumstances, aquarium owners may want to introduce all the fish at the same time so as to avoid territorial disputes.

Despite their somewhat aggressive nature, purple tangs generally do well in a reef setting and are therefore considered to be compatible with corals or sponges.

Purple tangs are reef fish and are most common in the Red Sea. They can also be found in the Gulf of Aden, the Arabian Sea, the Persian Gulf, and the western Indian Ocean.

The fish live singly, in pairs, or, in areas where space is plentiful, in larger groups.

In the home aquarium, the tang requires a large amount of space due to its adult size. An aquarium between 100 and 125 gallons is essential to provide optimum purple tang care and ensure that the fish is comfortable.

These fish are also very energetic swimmers and enjoy having a lot of free space in which to move about. Tangs also appreciate a good amount of light.

In the wild, these tangs spend their days seeking out algae and seaweed in rock cervices. This can be mimicked in the aquarium by providing live rock, which will encourage algae growth. The rock also offers hiding places for the fish.

The water temperature in the aquarium should be kept between 72 and 82 degrees Fahrenheit, with a pH between 8.1 and 8.4. A specific gravity between 1.021 and 1.025 suits these fish well.

Purple tangs are herbivores. They will often try meaty foods, but their diet should be made up mostly of algae, seaweed, and greens. The fish will often graze on algae that accumulate in the aquarium, but this is generally not enough to account for their entire diet.

Instead, dried algae can be added to the tank. Marine seaweed can also be offered. The seaweed can be tied to a rock or clipped to the tank so that the fish can graze more naturally. Other types of vegetable-based flake or cake foods will also help to supplement the fish’s diet and ensure it is receiving the proper nutrients.

Many tang keepers recommend feeding these fish about three times a week. A large piece of seaweed or algae that will keep the fish busy for several hours is recommended, as this mimics their natural grazing behavior.

Breeding purple tangs in captivity is rare and notoriously difficult. These fish are aggressive and territorial around other tangs, so it’s difficult to keep them together, even as a pair.

In addition, it is almost impossible to determine the gender of the fish by looking at them. For these reasons, most aquarium enthusiasts do not attempt to breed purple tangs. 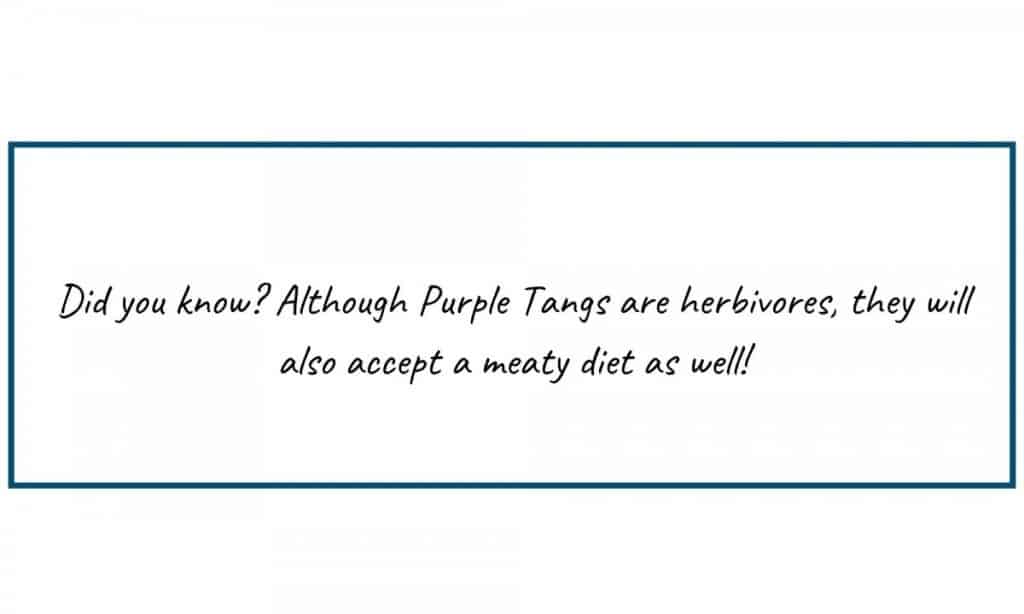 Purple tangs are generally not any more susceptible to diseases or conditions than other fish. However, because these fish often travel from person to person before reaching their final home, they can encounter many different germs and bacteria.

In addition, the transition from seller to home aquarium can be stressful on the fish. In order to ensure that the purple tang is comfortable in its new home, it is essential to acclimate it gradually. Once acclimated, the purple tang should be kept in a quarantine tank for a few weeks to ensure that it is not harboring any diseases.

This gives the fish a chance to rest and also guarantees that it won’t be passing any bacteria or viruses to other fish.

Purple tangs are quite popular but, because they are almost never bred in captivity, can also be relatively expensive. Generally, these fish sell for between $75 and $150, but some of the more colorful or healthier examples can sell for $250 or more.

Should You Add a Purple Tang to Your Aquarium?

Purple tangs are often expensive to purchase, and they require a large amount of space in order to remain healthy. However, once they have been properly acclimated to an aquarium, these fish are relatively hardy and are not difficult to care for.

They are a good choice for everyone from beginner to advanced saltwater aquarium keepers.

The purple tang is an excellent choice for reef aquariums as, aside from occasionally bumping into or toppling rock or coral structures due to their exuberant swimming, they won’t damage coral or sponges. They are also considered to be friendly with most other fish as long as the fish do not look like them.

Purple tangs are an excellent choice for anyone seeking a vibrant, energetic addition to the home aquarium.